The 17th Academy Awards, which honored achievement in film in 1944 was held at Grauman’s Chinese Theater on Thursday, March 15, 1945 and was one of distinction for several reasons.

For one thing, the 1945 Oscars marked the first time the ceremony was broadcast nationally on the ABC Radio network.  This was also the first year that the Best Picture category was limited to 5 movies, from the previous ten.  And 1945 marks the first and last time one person was nominated in both the leading and supporting actor categories for playing the same role.  That distinction is held by Barry Fitzgerald for his portrayal of Father Fitzgibbon in Leo McCarey’s Going My Way.

When the great Charles Coburn stepped up to the microphone on March 15, 1945 to announce the nominees for Best Actor in a Supporting Role these are the names he read:

Barry Fitzgerald took home the Oscar for Supporting Actor, losing in the Leading Actor category to his Going My Way co-star, Bing Crosby.

That’s how the Supporting Actor category went down in 1945.  Talented actors who did great work received nods from Oscar.  All’s fine and dandy.  Except – although it’s difficult to argue with the picks made by the Academy – there was a glaring omission on the list.  That is what is now being referred to (by me) as the snubbing of Barton Keyes.  Barton Keyes is the role brilliantly portrayed by Edward G. Robinson in Billy Wilder’s Double Indemnity.

“This Dietrichson business. It’s murder. And murders don’t come any neater. As fancy a piece of homicide as anyone ever ran into. Smart, tricky, almost perfect. But… I think papa has it all figured out. Figured out and wrapped up in tissue paper with… pink ribbons on it.”

I saw Double Indemnity in a theater in December, a viewing that only strengthened my conviction that as great as the film’s story is, as wonderful as both Barbara Stanwyck and Fred MacMurray are in it, THE standout in the film is Edward G. Robinson as Barton Keyes.  Robinson’s depiction of the ruthless, irritable, funny, big-hearted, insurance adjuster with the “little man” who lives in his gut that serves as a warning when some claim seems “off,” is unforgettable.  His physicality as he makes a point, how he uses his cheap cigars, which become key to his relationship with Neff, are perfection.  Every line Robinson delivers is a keeper. 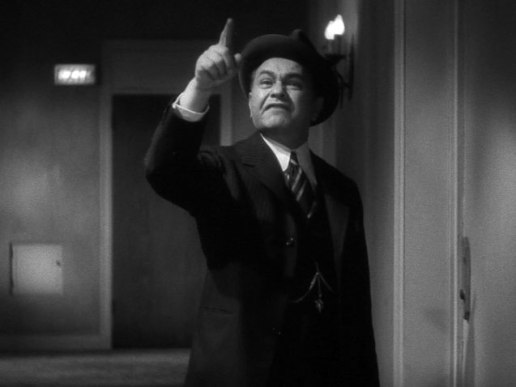 That’s all my opinion, but consider the following:

Double Indemnity received a total of seven Academy Award nominations, including Best Picture and Best Writing, Screenplay.  Yet, the man who portrayed a major reason for both of those nods to the movie was not nominated, which makes no sense.  Barton Keyes is the only character in Double Indemnity one cares a hoot about, as such he is the heart of the movie and provides all the comic relief.  Keyes also poses the only threat to the protagonists in the film, which translates to his being the cause for all of the tension as the story unfolds.  There are no cops needed to breath down anyone’s neck in this, only Keyes’ “little man” looms large for the perpetrators of the crime.  Large enough, I might add, to cause a panic wherein Neff renders resolution by his own hands, rather than face that “little man.”  So, no nomination for Robinson here is a head scratcher!  Not to mention the Keyes role is no picnic…

“A claims man is a doctor and a bloodhound and a cop and a judge and a jury and a father confessor all in one.”

Robinson plays Keyes with all those facets and more.  He is a father figure, confidant, bitter nonconformist, humorist and prime investigator – a fully realized character central to the film’s plot realized by a master craftsman, a man who was a “unique blend of character actor and superstar.” (TCM)

Of the Keyes role Robinson said:

“It was, in fact, the third lead. I debated accepting it.  Emanuel Goldberg told me that at my age it was time to begin thinking of character roles, to slide into middle and old age with the same grace as that marvelous actor Lewis Stone . . . The decision made itself . . It remains one of my favorites.”

It’s one of my favorites too.  And there’s my pitch for a snub of the highest order.  Without detracting from the gentlemen whose names were read by Charles Coburn on March 15, 1945, the snubbing of Barton Keyes leaves an uneasy feeling in my gut.  Edward G. Robinson should have made the cut.

I chose to focus on Barton Keyes because, as I mentioned, Robinson makes Double Indemnity the movie it is – and it is one of the greats.  However, it must be noted that Edward G. Robinson’s entire six-plus decade career was a huge snub.  The actor, named the #24 Greatest Actor on the American Film Institute’s list of 50 Greatest Screen Legends, beloved and admired by fans and peers alike, an actor whose talent transcends culture and language (I know this first-hand) never received an Academy Award nomination.  Ever.  Unbelievable.

Two months after Edward G. Robinson died in 1973 the Academy bestowed upon him an Honorary Oscar for being an artist “Who achieved greatness as a player, a patron of the arts, and a dedicated citizen … in sum, a Renaissance man. From his friends in the industry he loves.” His widow Jane Robinson accepted the award on his behalf. (IMDB)

For more on Edward G. Robinson visit a recent post in his honor.

This entry is submitted as part of the 31 Days of Oscar blogathon hosted by Outspoken and Freckled, Paula’s Cinema Club and Once Upon a Screen.  For more posts featuring Oscar snubs, visit Outspoken and Freckled, the host for this category.  Also be sure to stay tuned for many more Oscar-related posts throughout the month.  And tune in to Turner Classic Movies every day in February as the network celebrates 86 years of Oscars history with a 31 Day festival “where every movie shown is an Oscar winner or nominee.”

For more of my own picks of snubs visit OH NO THEY DIDN’T! Ignored by Oscar.