“I’ll tell you this about the Oscars – they’re real.” – William H. Macy

And so is this blogathon! 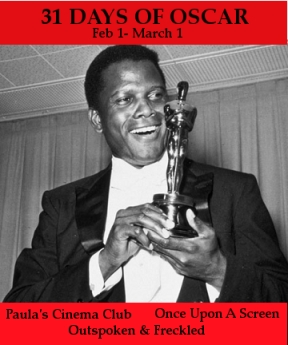 For the second year in a row Kellee (@IrishJayHawk66) of Outspoken and Freckled, Paula (@Paula_Guthat) of Paula’s Cinema Club and Aurora (@CitizenScreen) of Once Upon a Screen bring you a mammoth blogathon event to coincide with Turner Classic Movie’s (TCM) 31 Days of Oscar … 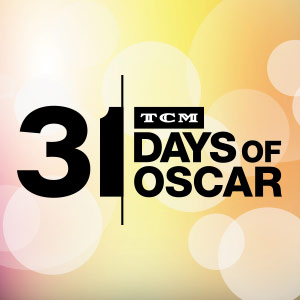 This promises to be another February filled with fabulous tales and screen wonders – many of the stories, players and films featured on TCM all month long.  In fact, the network is kicking things off this year in spectacular style on February 1st by featuring all of the Best Picture nominees from Hollywood’s Golden Year, which is celebrating its 75th anniversary! (That would be 1939, by the way) In addition, they are also screening the world premiere of the new, TCM original documentary, “And the Oscar Goes To…” that day.  (Click on the TCM logo above for details and schedule).  In short, if you can’t take the entire month of February off from work or send your kids to your relatives then be sure to clear your DVRs!

AND join the blogathon.  Share stories about the films and players in Oscar’s distinguished history.  Tell us about which films, actors or directors deserved an Oscar nod and were ignored or about which films inspire you with their music or lighting. We are not limiting this event to classic film fare, we want to see and hear it all from the golden man’s more than eighty-five year history – including information and commentaries on this year’s nominees. 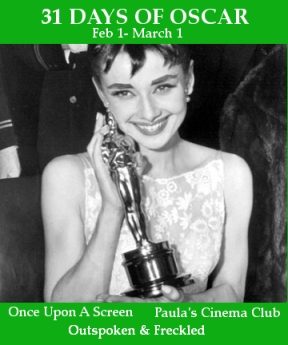 We are doing things a little different this year by focusing on a different Oscars topic each week.  Here are the topics and list of participants, which will be updated as more entries come in.  Note you can decide to join us at any time during the month!

Next, our 31 Days of Oscar Blogathon co-host Aurora (@citizenscreen) of ONCE UPON A SCREEN brings to light, “The Snubbing of Barton Keyes.” In review of the overlooked performance of Edward G. Robinson’s iconic role in Double Indemnity (1944), Aurora writes: “Robinson’s depiction of the ruthless, irritable, funny, big-hearted, insurance adjuster with the “little man” who lives in his gut that serves as a warning when some claim seems “off,” is unforgettable.”

Ruth of SILVER SCREENINGS (@925Screenings) offers up “Oscar Snub: Gunfight at the O.K. Corral.” In defense of the screenplay that never received the Oscar nom, she adds, “The script has all the hallmarks of a great western: memorable lines, interesting characters, and authentic-looking sets.”

The Gal Herself of ONE GAL’S MUSINGS discusses the Oscar snubs of Richard Burton in“Richard Burton’s Bad Luck with Drunk Cowboys.”  As she describes his predicament- he was “tormented by the choices he’d made… Burton believed that an Oscar would be tangible evidence that it all had been worth it.”

A PERSON IN THE DARK gives us the “2 Oscar Snubs That Really Irk Me.” FlickChick has “a list of gripes and grievances a mile long” but she’s chosen to “just share 2 of the snubbed ones that really, really irk me” with the performances of Jean Hagan as Lina Lamont in “Singin’ In The Rain” (1952) and Robert Preston as Toddy in “Victor/Victoria” (1982)

ImagineMDD (@ImagineMDD) evaluates the obvious oversight of “Bringing Up Cary Grant and Oscars” with a detailed breakdown of his remarkable yet snubbed performances. With 72 films- many as popular then as they remain now- it’s hard to believe he only received 2 noms for Best Actor?!

Next up, Kelly (@popcornnmovies) over at ON POPCORN AND MOVIES provides a delicious serving of the many snub highlights over the years of Oscar history in “What Do You Want… Awards or Iconic?”

One of the lovely Metzinger sisters, Connie, at SILVER SCENES Blog builds a compelling case for the snubbed yet grand sets in the film “Suez” (1938), “Set Design – Suez” (1938)  As Connie points out, “it remains an entertaining and thrilling spectacle.”

Next, Marlee of PICTURE SPOILERS reveals a biopic view of Marion Benson Owens aka Frances Marion for her unsung works in The Second Annual Muse Awards: 31 Days of Oscar Blogathon

Minoo on the CLASSIC MOVIE HUB BLOG justifiably argues for Oscar Snub- Myrna Loy. As Minoo scribes regarding one of Loy’s most memorable roles… “The fact that Loy wasn’t even nominated for this touching, poignant and truthful performance is certainly one of the Oscars’ biggest snubs.”

Finally, fellow 31 DAYS OF OSCAR co-host Paula of PAULA’S CINEMA CLUB passionately protests the Oscar Snub: Barbara Stanwyck in STELLA DALLAS. As Paula astutely observes, “I also think the realism of Stanwyck’s performance may have been another contributing factor. She is always so natural, and almost never seems to be acting.”

First up, we get all glammed up as Kimberly (@GlamAmor) from GLAMAMOR brings us her latest entry for Style Essentials with “Ava Gardner is Dressed to Kill in Vera West for 1946’s THE KILLERS”

Continuing in a fashionable theme, Kay (@KayStarStyle) from MOVIE STAR MAKEOVERreminisces on the best red carpet style successes from the Oscars with “Retro Red Carpet Review”

CAFTAN WOMAN (@CaftanWoman) revisits the fourteen original songs introduced by Bing Crosby, nominated for Best Song Oscars over the course of his film history in “Sing A Song of Oscar”

Kelly (@popcornnmovies) of …ON POPCORN AND MOVIES devotes her post to the beautiful 2005 film adaption that practically swept all the “art” categories with six Academy Awards nominations, “MEMOIRS OF A GEISHA… in need of no words…”

THE VINTAGE CAMEO (@vintagecameos) waxes melancholy on the Oscar categories that have gone extinct with “Forgotten Oscars: Best Dance Direction”

Constance from SILVER SCENES Blog joins in with a delightful tribute to the entertaining editor with perfect comedic timing best known for his Disney films, “Editor- Cotton Warburton”

Victoria (@miss_vicki) of GIRLS DO FILM offers up a wonderful review of two films of the same story with Oscar winning results like Best Art Direction and Best Costume Design with,“The Spectacle of MOULIN ROUGE”

Angela (@MaterialGirl850) over at THE HOLLYWOOD REVUE orchestrates a melodic perspective on the magical relationship between film and song with, “The Power Of An Original Song”

Pam at Once Upon A Screen — The Golden Age of Hollywood Revisited: Henry Fonda Finally Wins An Oscar

The Gal Herself — In Praise of Practical Magic: Julie Andrews

Karen of Shadows and Satin — Van Heflin in Johnny Eager (1941)

ImagineMDD — Hume Cronyn: One Life, a Boatload of Characters

Aurora of Once Upon A Screen — Spencer Tracy: Oscar and the Actor’s Actor

Week 4 – Hosted by Aurora – The Directors!

Visit with the great Sidney Lumet as he directs 12 Angry Men, a fabulous entry by Silver Screenings.

Then read about how Federico Fellini drew from his own contradictions in a Spotlight by Maegan, a guest post on Once Upon a Screen.

After that consider the lasting and moving work of one born to showbiz as Vincente Minnelli is duly honored by The Vintage Cameo.

Proceed on and be reminded that he was much more than a “women’s director.” George Cukor (as in “cucumber”) is the subject of Margaret Perry’s retrospective on an impressive career.

Finally… on popcorn and movies brings it all home with a discussion about how John Ford Screwed Up her Geography!

Margaret of The Great Katharine Hepburn tells us why Little Women (1933) is a very big deal.

Kelly of …On Popcorn & Movies recalls her experience seeing the 2011 Best Picture winner, The King’s Speech, at its first public viewing in Telluride.

Ruth of Silver Screenings writes that Paramount got its money’s worth for the $2 million it spent on Wings in Flyboys In Love and War.

Christy of Christy’s Inkwells gives us the backstory on A Man For All Seasons.

Iba of I Luv Cinema predicts who will be making the Best Pictures of the future in ‘Twas the Night Before the Academy Awards Ceremony.

I speculate wildly on how two Best Picture (and two Best Director) categories might change to the Academy Awards in Could more be more?

Aurora of Once Upon A Screen pays tribute to the “great, if underappreciated” George Stevens’ work on A Place in the Sun.

AnnMarie of Classic Movie Hub Blog analyzes You Can’t Take It With You, “a profoundly moving film that is as relevant today as it was over 75 years ago when it first hit the big screen.”

Em of The Vintage Cameo describes The Silent Inspirations ofTitanic (1997), “deep-rooted images [that] would remain even in Cameron’s version nearly a century later.”

We are taking turns hosting, but you can submit topics either by leaving comments on any of our blogs, via twitter or by email.  We ask that you please include the following:

It would also be great if you can include any of the event banners included in this post on your blog to help us promote the event.

SO – write to your heart’s desire!  Write one post or several on each topic.  But write!  And join us.

Here’s to Oscar, to TCM and to YOU!

PS – You may want to peruse the entries for last year’s event – it was absolutely fantastic and I’ve no doubt you’ll be duly impressed. 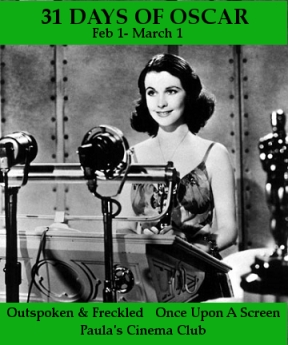 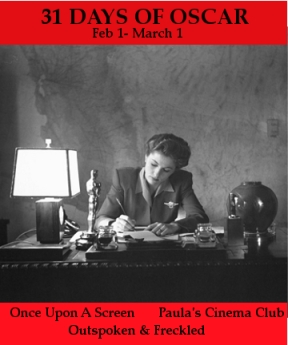 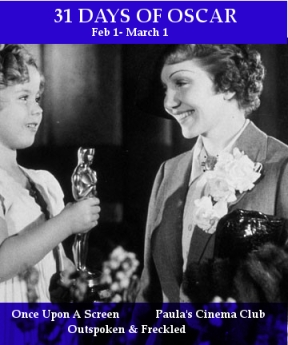