The first Spencer Tracy movie I ever saw was George Cukor’s Edward, My Son, the 1949 drama in which Tracy plays an obsessive father who goes to extremes to ensure his son’s success.  I was riveted by the movie and Tracy’s performance.  I was either seven or eight years old and didn’t know who Spencer Tracy was, but found his ordinariness mesmerizing.

“He is like an oak tree, or the summer, or the wind.  He belongs to an era when men were men.” – Katharine Hepburn

Subsequent viewings of Edward, My Son have diminished the power of Tracy’s performance in that particular film for me.  Oh, he’s still good in it, but it turns out that while the story remains a powerful one, I’ve come to recognize that Tracy really doesn’t lend the depth of darkness necessary for the role.  That is a criticism of Spencer Tracy by Spencer Tracy standards, the standards of one of the greatest actors who ever lived. 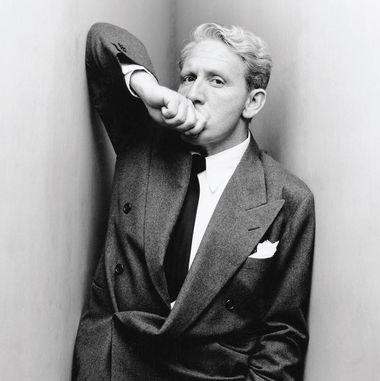 Since that first Tracy encounter I’ve fallen in love with him time and time again by way of his many powerful performances through the years.  As a father, as a confidant, as a man.  Perhaps Tracy wasn’t swoon-worthy in a Cary Grant sort of way, but in his best performances he was relatable and trustworthy with the steady presence of the everyman we all encounter or know from our own lives.  It’s the essence of “realness” that all of my favorite actors encompass – the Jack Lemmons of the world – that holds the appeal.  Tracy did it better than anybody.

“The only thing an actor has to offer a director and finally an audience is his instinct. That’s all.”

Most of the words Spencer Tracy seems to have spoken about his own career or talent tend to go the way of nonchalance and humility.  But by all accounts he knew he was good.

“The guy’s good. There’s nobody in the business who can touch him, and you’re a fool to try. And the bastard knows it, so don’t fall for that humble stuff!” – Clark Gable

The Academy of Motion Picture Arts and Sciences agreed with my assessment of Tracy’s performance in Edward, My Son it seems as it failed to recognize his performance in the film.  However, Tracy received lots of love from the Academy with a total of nine nominations for Best Actor with two wins. 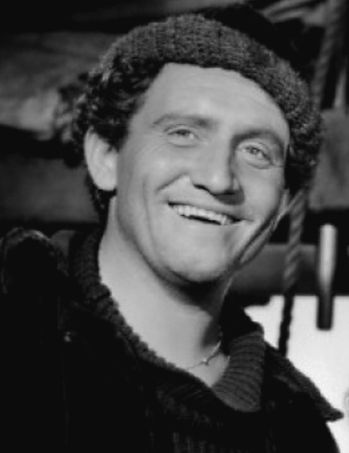 Tracy’s Oscar win for Captains Courageous made him the first of nine actors to win the award twice, and is one of two actors to receive it consecutively (with the next film), the other being Tom Hanks.  His nomination for playing Manuel in this film is also the first of two Tracy would receive for playing foreign fisherman.  The second one, which came almost twenty years later, was for The Old Man and the Sea.

Spencer Tracy’s Oscar win for playing Father Edward Flanagan in Boys Town made him the first actor to win the statuette for playing a real person who still lived at the time the ceremonies aired.

He received Best Actor nominations for the following performances: 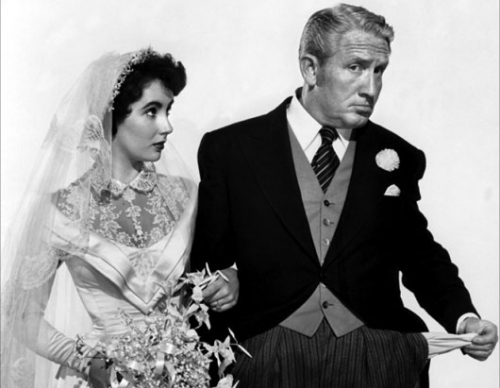 I must add my two cents here – despite this impressive list of nominations, Spencer Tracy deserved a few others for his performance in the romantic comedies he made with Katharine Hepburn, which rank among the best ever.  Aside from the depth he added to dramatic roles, his “realness” served him quite well in comedies too.  Father of the Bride is just one example and one of the four films in which Spencer Tracy appeared as lead actor that is listed on the American Film Institute‘s 100 Funniest Movies, at #83.  The others are: Adam’s Rib (1949) at #22, It’s a Mad, Mad, Mad, Mad World (1963) at #40 and Woman of the Year (1942) at #90.

His performance as Henry Drummond in Inherit the Wind (1960) is ranked #67 on Premiere Magazine’s 100 Greatest Performances of All Time (2006).  It also happens to be a favorite of mine with the scenes that pit Tracy against Fredric March a true, cinematic clash of the titans. 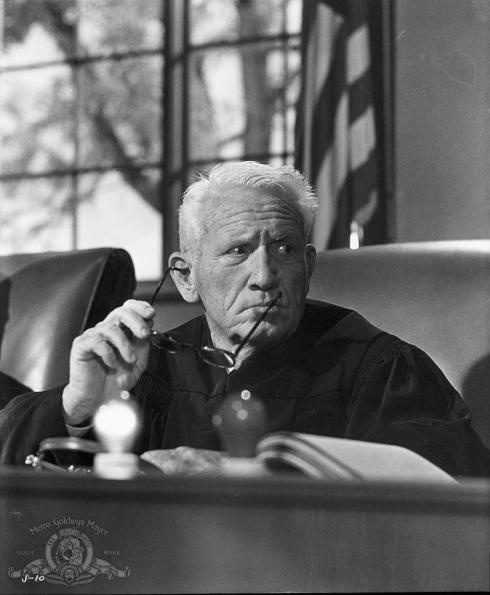 Most of us recognize that Oscar nominations – in the long run – mean little with regards to how films and performances are viewed as time passes.  Hell, as classic movie fans we know that all too well.  But we can’t deny that a long list of Oscar nominations serves a career (and a life) in a number of ways, including serving as a reminder that an actor consistently put forth quality work.  No one can dispute that fact as it pertains to Spencer Tracy.  In fact, no one ever did as his acting remains the stuff of legend, a standard, admired by fans, peers and moguls alike.

Legendary Metro-Goldwyn-Mayer (MGM), studio chief, Louis B. Mayer considered Spencer Tracy one of the few “true” actors he had at his studio.  After Tracy’s death, of him then head of MGM, Dore Schary said, “There can be no question that he was the best and most protean actor of our screen.”  The likes of Katharine Hepburn, Humphrey Bogart, Joan Crawford, Clark Gable, James Cagney and John Ford all called Tracy the greatest actor of his generation.  Richard Widmark went a step further to say he was “the greatest actor who ever lived.”

A few words on how Tracy acted:

Hume Cronyn: “His method appeared to be as simple as it is difficult to achieve. He appeared to do nothing. He listened, he felt, he said the words without forcing anything.”

Joan Bennett:  (who co-starred with Spencer Tracy in four films) “One never had the feeling he was ‘acting’ in a scene, but the truth of the situation was actually happening, spontaneously, at the moment he spoke his lines.”

James Cagney noted that Tracy was rarely the target of Impressionists, because “You can’t mimic reserve and control very well” and “there’s nothing to imitate except his genius and that can’t be mimicked.”

This is dedicated to the memory of Spencer Tracy for the more than three decades during which he gave us genuine, affecting work on the silver screen and submit it to the 31 Days of Oscar blogathon for the week dedicated to Actors because he was not only one of my favorites, but one of the best.

With his plain, everyman looks and raspy voice Spencer Tracy became both an unlikely box office draw and the actor’s actor.

The 31 Days of Oscar blogathon is hosted by Outspoken and Freckled, Paula’s Cinema Club and Once Upon a Screen.  For more posts dedicated to Actors visit Paula’s Cinema Club the host for this week’s topic.  Also be sure to stay tuned for many more Oscar-related posts throughout the month.  And tune in to Turner Classic Movies as the network’s fantastic 31 Days of Oscar marathon, which celebrates 86 years of Oscars history, continues until the March 2 airing of the 86th Oscars on ABC.