“Life is not a having and a getting, but a being and a becoming.”

Today would have been Myrna Loy’s birthday, which is as close to a national holiday as it gets in classic movie circles.  Everybody loves Myrna because there’s nothing not to love.  Even the little things. 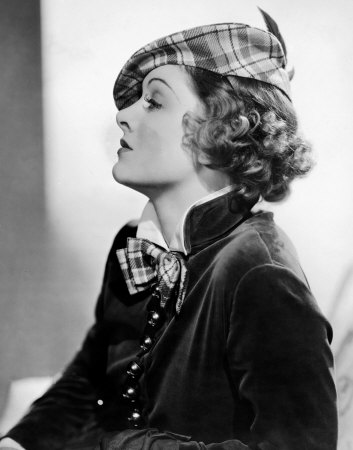 I grew up watching Myrna Loy in many of her movies, introduced to her on television as I was all the classic stars I fell in love with as a child.  My earliest memories of Ms. Loy are of her as Nora Charles in The Thin Man movies where she co-starred with the incomparable William Powell.  For years I didn’t know her name but I loved everything I saw her in.  Her glamour, her style, her unique delivery – natural, funny, sharp – the little choices she made in her portrayals of sophisticated, yet relatable women that added so much to each and every film she was a part of.  She was Hollywood’s biggest star, the undisputed queen of tinsel town in her prime, yet managed to play every single role in a manner that made her every woman, one we could all recognize as ourselves.   And, it must be said, she frequently stole scenes from the greatest in Hollywood. 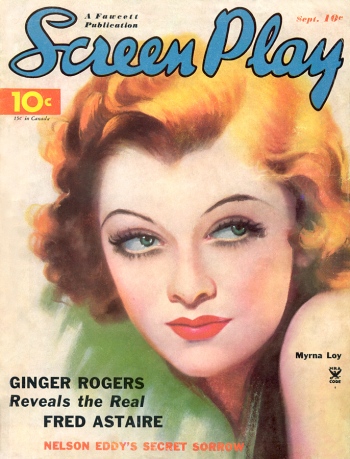 I recently did a post on William Wyler’s, The Best Years of Our Lives (1946) as part of a blogathon dedicated to Dana Andrews.  I chose to limit my discussion in that post to the three main characters in the film, the three veterans who return from war and are faced with a changed world.  You can access that post here, if interested.  I now have to mention Ms. Loy’s performance in the film.  She plays Millie Stephenson, wife to Al (played by Fredric March), one of the three veterans.  The Best Years of Our Lives has a superb cast and Myrna Loy gets top billing, which is testament to her popularity.

A great presence, Myrna enhances each and every scene she’s in Best Years.  I mention my favorite scene in the previous post I did on this film but I’m mentioning it here again.  It’s one of my favorites in all of film – the wonderfully touching scene when Al first returns home (The Homecoming), they see each other and embrace without a word.  A long marriage, an established love rekindled.  It wouldn’t work without her – an equal to the power of Fredric March.  I must mention I absolutely adore the brief shot that precedes the embrace in the couple’s hallway.  As Millie calls out to her children to see who was that at the door, realizing when she gets no answer that it can only mean her husband has arrived, she is shown from behind setting the table, her body freezes a moment and we can all but feel her heart begin to pound.  By the time she steps out into the hallway where she can see him we are all blubbering.  Wonderful acting.  The little things.

However fabulous and memorable, that’s just one scene of many where the slightest of gestures or looks or quips make her performance so memorable –  like the familiar, raised eyebrow, the awkward hesitations, or the way she keeps count, with a fork, of the drinks her husband consumes.  Peripheral but ever-present, those little things.  I have to mention another scene I love in Best Years where she doesn’t utter a word but speaks volumes.  Her husband now home she makes him breakfast in bed.  As she comes in with the tray she demonstrates how nervous she is, awkward, out of the habit of having him there.  Loy pauses, doesn’t look at him, an awkward glance perhaps, a side step here, an adjustment there.  It’s wonderful acting in a manner unique to her, I think.  Understated, simple, sincere and oh so sophisticated – always.

I just love her performance in this film, but I warn I’ll say that throughout this post.  Myrna Loy was typecast as “the perfect wife” after her performance in The Best Years of Our Lives.  Typecasting a star and actress of her caliber is too bad for her as well as her audience.  But it still didn’t negate her extraordinary talent no matter what role she played or whose wife she was onscreen.  Nor did it seem to affect the fact she never took what didn’t matter too seriously.

In Mr. Blandings Builds His Dream House, Loy co-stars with Cary Grant, as his wife of course.  Mr. Grant is one of the greatest screen legends of all time.  A gifted actor and comedian.  One of my absolute favorites and something to look at to boot.  Also in this movie is another A-lister, the supremely talented Melvyn Douglas.  Yet, it’s Myrna Loy’s scene where she’s explaining to the painters what colors she wants for the new house that is most memorable to me.  Again, her brilliant delivery, the nonchalant way she says everything is funny, truthful and convincing.  Honest.  Who else could do that in such a manner?

Just wonderful – the way she waits for the painter to show he understands her very specific instructions when she describes the white color for the kitchen, the way she looks at the piece of yarn.  It’s the little things.

“Nora of “The Thin Man” was different . . . Nora had a gorgeous sense of humor; she appreciated the distinctive grace of her husband’s wit. She laughed . . . at him and with him when he was funny. What’s more, she laughed at herself. Besides having tolerance, she was a good guy. She was courageous and interested in living and she enjoyed doing all the things she did. You understand, she had a good time, always.”

I’m not going to try to explain how fabulous she is in The Thin Man films because that quote says it all.  I’ll only add that because Nora had a “good time always,” so do we.  Myrna Loy is, in these films, even in the lesser of the series I have to say, half of one of the greatest, most memorable screen couples in film history.  I’ve never met anyone who doesn’t love Nick and Nora or discussed film with anyone who doesn’t mention this pair with deep affection and appreciation.  Of course, that’s also due to the hilarious, debonair, wonderful,  William Powell.  They are a perfect pair.  It’s worthy of note that Loy and Powell made fourteen pictures together.  I’d say there was some kind of chemistry there.  Their first movie together was W. S. Van Dyke’s, Manhattan Melodrama in 1934 and last, George S. Kaufman’s, The Senator was Indiscreet in 1947.  All great outings, by my estimation, because they never fail to entertain.  But none compare to the duo as Nick and Nora Charles.

No matter how many times I see it, her deadpan delivery of the, “Waiter, will you serve the nuts” line never fails to breaks me up.  I can only imagine the fun they must have had making this series of films.  As a comedian, Loy never tried hard, it seems, never tried to steal a scene, never made a terrible effort to deliver a funny line.  It was, in fact, the matter-of-fact manner with which she spoke that made the exchanges between her and Powell so funny.

Oh, yes.  I might as well mention another obvious – aside from the way Loy could convey a lot onscreen by the simplest of gestures, she was also adept at extreme physical comedy.  With the simplest of gestures, looks – sometimes scathing but filled with humor, sympathy or love, able to break your heart or break you up with equal energy – but she could do the pratfalls and trips with the best of ’em too.  Her entrance in The Thin Man is one of the all-time great character introductions.

I recently also Jack Conway’s, Libeled Lady (1936) again, another Loy-Powell coupling, but this time with the added bonus of Jean Harlow and Spencer Tracy.  Not too shabby. 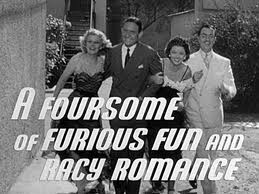 Libeled Lady is a delightful romantic comedy.  Interestingly, along with Grand Hotel, one of the few films to receive an Academy Award nomination for Best Picture without receiving any other nominations.  Myrna Loy plays the ‘Libeled Lady,’ Connie Allenbury, a rich, spoiled brat (although she’s really not bratty), who’s labeled a “Husband Stealer” in the headlines and files suit against the paper that’s smearing her name. 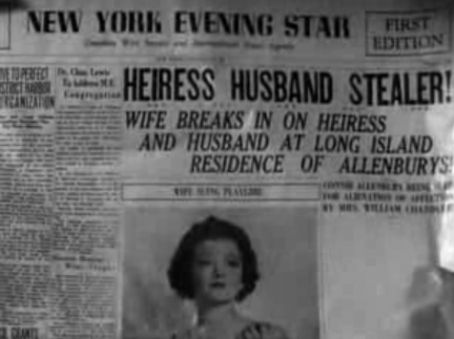 The editor of the paper, Haggerty, played by Tracy, his long-time intended, Gladys, played by Harlow and the paper’s representative, libel attorney, Bill Chandler, played by Powell put forth a pretty complicated scheme to catch the “international play girl” in a compromising situation so she is forced to drop the libel suit.  Anyway, fun ensues with all four leading players fun to watch.  Harlow, Powell and Tracy supply the screwball elements with Harlow and Powell supplying most of the real laughs although Powell’s performance is tops in this one – his broad style of comedy kills me.  Anyway, what Myrna brings to the table as the Libeled Lady are the glamour, style and heart of the movie. 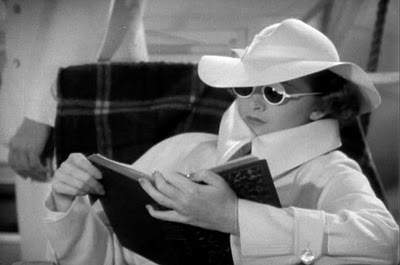 I might as well add my favorite scenes in Libeled Lady are those between Myrna Loy and William Powell.  They just had IT.  Here’s an example, one of my favorite scenes of all of their movies together, “Have you been proposed to much?” (Spoiler!)

A fun bit of trivia with regards to Libeled Lady and its cast – Reportedly, while shooting the movie, the four stars had become close friends, and William Powell even gave up his old habit of hiding out in his dressing room between scenes so he could join in the fun with the rest of the cast. One of the biggest jokes was a running gag Spencer Tracy played on Myrna Loy, claiming that she had broken his heart with her recent marriage to producer Arthur Hornblow Jr. He even set up an “I Hate Hornblow” table in the studio commissary, reserved for men who claimed to have been jilted by Loy. (IMDB) 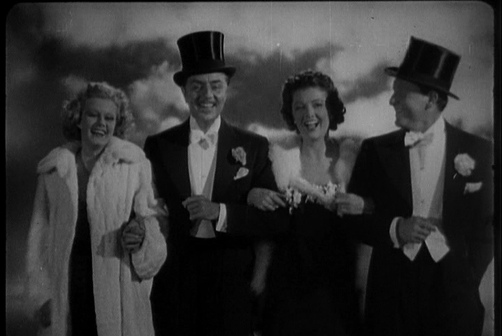 It’s unfathomable to me that Myrna Loy was never nominated for a competitive Oscar.  She was awarded a special lifetime achievement Oscar in 1991 “In recognition of her extraordinary qualities both on screen and off, with appreciation for a lifetime’s worth of indelible performances.”  A great recognition but a gross understatement.

Myrna Loy made 129 feature films – an incredible and prolific career by anyone’s standards.  I don’t think I’ve seen the majority of her films.  None of her earliest work in the 1920s, for certain.  But I have seen the majority of those she made from the early 1930s through her television work.  She was one the greatest movie stars ever and one of Hollywood films’ greatest actresses, I can say without reservation.  Perhaps most worthy of admiration, however, is the life she dedicated to causes she believed in offscreen.  She fought against the House un-American Activities Committee, against discrimination in housing, exposing segregation in federally funded programs during times when it was not the popular thing to do, among many other things.

[Challenging MGM bosses in the 1930s] “Why does every black person in the movies have to play a servant? How about a black person walking up the steps of a courthouse carrying a briefcase?”