The Academy of Motion Picture Arts and Sciences handed out the first Awards at a dinner party for about 250 people on May 16, 1929 to honor movies released from August 1, 1927 – August 1, 1928. The first Academy president, Douglas Fairbanks, hosted and presented in the ceremony held in the Blossom Room of the Roosevelt Hotel in Hollywood. The brainchild of MGM studio mogul, Louis B. Mayer, the Academy was formed in 1927 as a non-profit dedicated to the advancement and improvement of the film industry. Some might argue about some of those achievements, but there is one thing that is sure to impress classic movie and Hollywood fans – when the music plays to open this year’s Oscars on March 4, 2018 it will be the 90th time the film industry honors achievements in movies.

Here are the 1929 Winners and Nominees

If you take the time to look through all of the moments in 90 years of Oscars ceremonies, you’ll find numerous surprises, disappointments and controversy any number of which may spur debate from film aficionados. That’s where we come in. For the sixth consecutive year, I am joining forces with Kellee of Outspoken & Freckled and @Irishjayhawk66 and Paula of Paula’s Cinema Club and @Paula_Guthat to bring you the 31 Days of Oscar Blogathon. Given Oscar’s special anniversary and all of the memories, we hope you’ll consider joining us to make this the best and brightest outing yet. 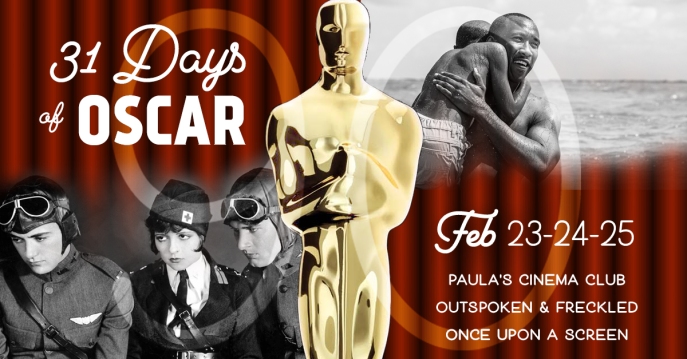 As you know, this blogging event is inspired by Turner Classic Movies’ 31 Days of Oscar marathon, which begins its 23rd installment on February 1. This year the network is presenting the movies based on the categories in which they were awarded or nominated. February 1st will honor Best Original Song Winner and Nominees and the festival kicks off with Busby Berkeley’s Gold Diggers of 1935 (1935). William Wyler’s Ben-Hur (1959) will end the 31-Day presentation on March 3, the day dedicated to Best Picture Winners.

Since both TCM and the Oscars bring to mind our beloved host and favorite historian, Robert Osborne, we thought we would kick off our Blogathon with his words about the 31 Days of Oscar marathon…

“One thing seems to stir the souls of our Turner Classic Movie loyalists like no other: the 31 Days of Oscar salute.”

Rather than hosting the 31 Days of Oscar Blogathon for the entire month of February, as we’ve done in the past, we will host all entries the weekend before the Oscars this year. That is from Friday, February 23 through Sunday, February 25, which leaves Oscar weekend free for last minute movie watching. We’re also combining all topics this year and simply presenting them over the three days. Any Oscar-related topic is fair game. We are not limiting this event to classic film fare as we’d like to see entries covering the entire 90-year history of Oscar, including this year’s nominees. To help get you motivated here are the categories we have used in the past…

Most of you know the drill, but as a reminder, adhering to the following is necessary:

We look forward to hearing from you and to reading your entries. As many entries as you want, actually, so get to it!

Until then here’s to Oscar, to TCM and to YOU!

Silver Screenings – How the Oscars Began

Critica Retro – The Trouble with Thrillers

The Old Hollywood Garden – The Snubbing of Howard Hawks

Top 10 Films – Horror Films to Triumph at the Oscars

The Filmatelist – The 1982 Oscars: Tootsie and Victor Victoria