I spent my July 4th morning watching one of my favorite episodes of Star Trek the original series.  This episode is from the show’s third season directed by Jud Taylor titled “Let That Be Your Last Battlefield.”  Based on a controversial story, “Portrait in Black and White” written by Barry Trivers in 1966, fifty years ago if you can believe it.   “Battlefield” is – in my opinion – the ultimate example of how Star Trek often pushed the envelope by addressing controversial issues during a turbulent time in our country.  “Let That Be Your Last Battlefield” is a daring, forward-thinking episode that tackles the issue of racism head-on in the context of two perspectives in a sense – its absolute absurdity and its dire consequences.  As we celebrate our country’s independence let this be a reminder of the work we’ve yet to do to make America as great as she should be.

The fact that “Let This Be Your Last Battlefield” would be controversial – even in its planning stage – did not escape Star Trek creator Gene Roddenberry or the executives at NBC.  It took nearly three years for an acceptable script to be approved.  But Roddenberry knew that if handled intelligently the material in Trivers’ short story could prove “highly provocative, entertaining, and revealing, making points via its Science Fiction approach that could never be made in other genres.”  With the careful handling of the story written by Gene L. Coon with teleplay by Oliver Crawford “Let That Be Your Last Battlefield” may have resulted in one of Star Trek’s finest hours.  Although I must note that many reviews of the messaging of this episode reference the material too obvious to be effective, I disagree.  I was deeply affected by this episode when I saw it as a child and still am at each and every subsequent viewing.

As “Let That Be Your Last Battlefield” opens the crew of the USS Enterprise is on a fairly routine mission to decontaminate Ariannus, a planet that has been attacked by a bacteria, which threatens to render it lifeless.  On route to Ariannus the Enterprise encounters a wayward, stolen Federation shuttle craft with an injured alien life form aboard.

The alien, whose face is half white and half black and is thought to be a mutation, is evasive as to why and/or how he stole a Federation shuttle.  We learn as Dr. McCoy treats him in sick bay that his name is Lokai, a native of the planet Cheron.  Without getting specifics Captain Kirk simply decides to turn Lokai over to Starfleet Command for judgment as soon as they complete the Ariannus mission.  However, that proves easier said than done as the Enterprise encounters an alien ship with another life form onboard, which threatens the completion of the mission.

Enter Commissioner Bele from the planet Cheron who, as it turns out, is looking to claim Lokai as a prisoner for being a political traitor.  As Bele explains Lokai was tried and convicted of treason on Cheron and managed to escape.  The two Cheronians have been in an interplanetary cat and mouse game for 50,000 terrestrial years.  Or, a very long time.  While Bele demands Kirk turn over the prisoner to him, Lokai demands political asylum, placing the crew of the USS Enterprise right in the middle of an alien conflict.

While Captain Kirk vows to remain neutral with regards to the feud between the Cheronians he allows each equal time to explain the details of the long-standing rivalry and each alien does so passionately.  Lokai explains how his people have been oppressed and abused, rendered slaves to Bele’s ruling class, while the latter explains the wickedness of Lokai’s breed, an inferior race prone to criminality, “vicious subverters of indecency.”

During the discussion of the conflict with Commissioner Bele both Kirk and Spock are taken aback by the hatred with which the alien refers to the inferior breed, a breed that looks the same as his own.  “You’re two of a kind” says Spock to which Bele responds that even to simple-minded people the difference should be obvious…

Bele: It is obvious to the most simple-minded that Lokai is of an inferior breed.

Mr. Spock: The obvious visual evidence, Commissioner, is that he is of the same breed as yourself.

Bele: Are you blind, Commander Spock? Well, look at me. Look at me!

Captain James T. Kirk: You are black on one side and white on the other.

Bele: I am black on the right side!

And there’s the rub, the absurdity of prejudice as evidenced by both Spock and Kirk’s reaction.  Two beings feuding for centuries based on pigmentation differences, a hatred so deep-seated it results in the annihilated of both races because one is deemed inferior to the other by senseless hatred.  And the final showdown in “Let That Be Your Last Battlefield” is depressing – the oppressed running from the oppressor for all eternity. 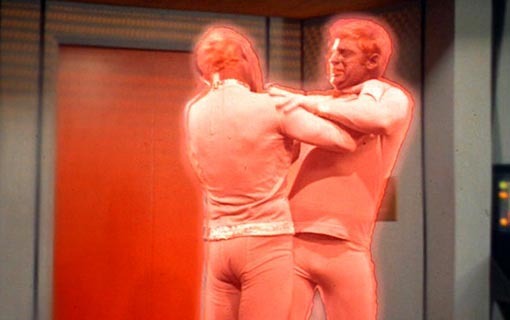 There’s no reasoning with this kind of hatred.

I needn’t explain how or why Star Trek pushed boundaries on a regular basis.  The groundbreaking and innovative Science Fiction series didn’t shy away from making statements under the guise of supreme interstellar entertainment.  But of the many episodes worthy of note, “Let That Be Your Last Battlefield” may stand above most others because its message of doom due to blind hatred is (unfortunately) still relevant today.

I’ve read several commentaries on this particular episode of Star Trek, incidentally, in which people discuss the ineffectiveness of the alien make-up in the episode, which results in a heavy-handed approach to the racism theme.  I must disagree with that view.  While it’s true that the colors used are inconsequential in that they don’t matter in the larger scheme of things, there’s also no doubt you cannot mistake the fact that the use of contrasting black and white is as in-your-face a message as there is.  But this is also how racism works – often subtle and confusing, but also absurd, devastating and unmistakable.  You cannot turn a blind eye with “Let That Be Your Last Battlefield.”

Chekov: There was persecution on Earth once. I remember reading about it in my history class.

Sulu: Yes, but it happened way back in the twentieth century. There’s no such primitive thinking today.

Aside from the fantastic regular crew of the USS Enterprise, “Let That Be Your Last Battlefield” guest-stars Lou Antonio as Lokai, a great actor with a fantastic TV resume and Frank Gorshin as Bele.  Gorshin may best be remembered for playing The Riddler in the Batman TV series, but he was an extraordinary talent well beyond his memorable depiction of the Batman villain.  He doesn’t disappoint in this instance either.