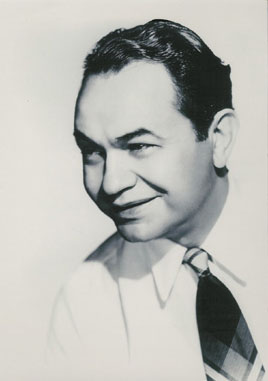 Edward G. had a career in film that spanned six decades during which he brought to life numerous memorable characters in over ninety films, all of which he made his own with that distinctive, commanding voice and unique delivery.  He was made for the silver screen.

“Some people have youth, some have beauty – I have menace.”

Menace yes.  It was one of the things that made him memorable.  But there was also – always – a lot of class.  I have to say I am more enamored of Robinson’s work each and every time I watch or re-watch his movies – just recently I was reminded of his sweet performance in Roy Rowland’s, Our Vines Have Tender Grapes when the film was shown on TCM and last month I had a chance to see his memorable depiction of Barton Keyes on the big screen in Billy Wilder’s, Double Indemnity.  It seems that no matter the movie he appears in when it’s over I want more.

As is often the case, if I’m on the move and unable to access my favorite classic stars on a screen then I turn on the radio.  It’s lucky that like so many of his contemporaries, Edward G. Robinson was a staple on that medium as well.

As he was one of America’s most beloved tough guys, many of the characters Robinson portrayed on radio and even later on television reflected that familiar persona.  However, during his entire career on the airwaves he did it all – and with the same intensity as he delivered in all his work.

Following are a few enjoyable radio shows in which Robinson appeared.  All are worth a listen.  I’m somewhat disappointed, however, that I couldn’t find individual episodes of Big Town to include in this tribute.  Big Town was an anthology drama series that aired from 1937 to 1952 in which Robinson starred until 1942.  In the series, which centered on the newspaper business, Robinson played Steve Wilson editor of the “Illustrated Press.”  Until 1940 Claire Trevor starred opposite Robinson with Ona Munson replacing her.  Replacing Robinson in 1952 was Edward J. Pawley who continued on as Wilson for the remainder of the show’s run.  In any case it’s been quite a while since I listen to episodes of Big Town, but the ones I have heard are entertaining and since he starred in them I figured it was worth a mention.

And now let’s just listen to Edward G. Robinson with a “Greetings from Hollywood, Ladies And Gentleman……”

I’ve posted previous episodes from The Old Gold Comedy Theater, which ran for just a single season (1944-1945), but in case you didn’t tune in what makes this anthology series special is that it was hosted by Harold Lloyd.  Otherwise the series followed the formula used by most other series of the time.

From November 24, 1946 an episode of The Jack Benny Program with special guest, Edward G. Robinson.

“To last you need to be real.”