Hispanic Heritage Month began in 1968 to celebrate the contributions, histories and cultures of American citizens of Hispanic origin. The yearly month-long series of events begins on September 15 and ends on October 15. I like to do my small part on this blog and across social media by hosting the Hollywood’s Hispanic Heritage Blogathon, which kicks off its fourth incarnation with this announcement. I’m excited to continue this tradition and hope you can join me in spotlighting movies and TV shows by, with and for Hispanics. 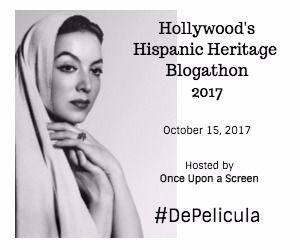 If you’d like to join, but can’t think of a topic or topics here are a few lists to get you started:

Latinos in Film from Wikipedia

Ana Eire guest essay on Once Upon a Screen

Once Upon a Screen – El Manisero (The Peanut Vendor)

A Shroud of Thoughts – The Cisco Kid

Find me on social media…