I’m thrilled to be hosting the third and final day of the What A Character! Blogathon for 2014.  For the third year in a row the response, enthusiasm and quality of posts dedicated to these actors have been outstanding.

I’ll be updating the links to individual posts throughout the day and will promote today’s entire roster tonight by way of a social media character actor frenzy.  Stay tuned!  In the meantime you may want to catch up with the submissions for Day One and Day Two of the event.  Scroll down to access those posts.  The few tardy entries will be added as received.

A Person in the Dark, a self-described Ann Dvorak freak discusses a career that shifted from A-list star to character actor.

He represented authority, played aristocrats, was the captain of a cricket team and shared a birthday with the one who honors him.  On C. Aubrey Smith it’s Critica Retro.

The lovable Cecil Kellaway and his “old guy charm” never fail to entertain by The Lady Eve’s Reel Life.

Charles Coburn, a familiar actor with a great presence by Amy’s Rib

The Movie Rat pays tribute to Christopher Lloyd who after 180 screen credits is still a bonus and a boon to any film.

A Closer Inspection of Dennis Hoey by Silver Scenes.

Christy’s Inkwells honors Don Beddoe, “a character actor with a genial, sometimes startled look” and one hell of a resume.

Elsa Lanchester, the memorable bohemian who thought of acting as an aside is paid tribute by Blog of the Damned

Broadway to Hollywood, the life and career of Grant Mitchell is the focus of Immortal Ephemera.

A generous, compassionate man lived a life laced with lies. Raymond Burr is given his due by Shadows and Satin.

Who is She? Rochelle Hudson by Bunnybun’s Classic Movie Blog

Thelma Ritter, Extraordinary Everywoman is the subject of this post by Cinephiled

By way of anecdotes and name dropping Moon in Gemini honors Wallace Shawn.

Day One – November 16 – Hosted by Kellee

Ann Doran and Lurene Tuttle – Theresa on Once Upon a Screen

Burgess Meredith by The Last Drive-In

Edna May Oliver by Portraits by Jenni

Frank McHugh by (This) Girl Friday

Tony Randall by A Shroud of Thoughts

Agnes Moorehead by Tales of the Easily Distracted

Thomas Mitchell by Once Upon a Screen

And we end with a huge THANK YOU to all the participants in the third annual What A Character! Blogathon!  On behalf of Kellee and Paula I can say confidently that by way of your posts we have relived wonderful moments in film, you’ve spotlighted legendary careers and brought to light many faces we all too often ignore.  As always it’s an education, a pleasure and an honor to have you join us. 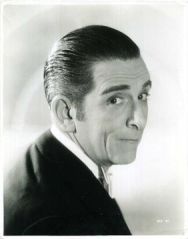 Announcement: (How this year’s event began)

In 2012 we – as in Kellee, Paula and I – borrowed a catch-phrase from our home of the classics, Turner Classic Movies (TCM) in order to host a blogathon dedicated to those whose names few remember.  The phrase is WHAT A CHARACTER! and the players are actors who rarely got leading parts, exhibiting instead a versatility and depth many leading players wished they had.  We never tire of seeing them or paying tribute and as the previous two installments of this event proved, neither do you.  So, here we are with the third annual WHAT A CHARACTER! Blogathon.

To say we’re thrilled is an understatement and we hope you’ll join us in spotlighting the Edward Arnolds and Eugene Pallettes and Eve Ardens of the world, the oft forgotten names that never appeared above the title.  If this is right up your movie alley then give us a shout out… 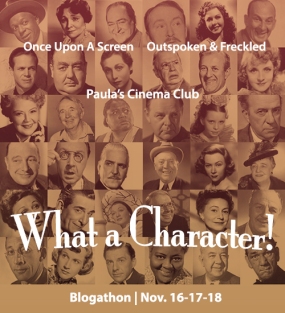 PS – You might be interested in visiting the page dedicated to WHAT A CHARACTER! on this blog where all posts from previous years are featured.  It’s an impressive lot.  You can also access the list of names of the “characters” whose faces appear on our banner there.

“I was only a leading man for a minute; now I’m a character actor.” – Robin Williams