This is a special guest post by Theresa Brown

As I scroll down the names of the participants in this third annual “WHAT A CHARACTER!” blogathon, I feared my picks would get lost in the shuffle of greats. But when I pounced on Aurora (I mean, politely asked her) if I could participate in one of the most popular blogathons in the blogosphere, two actresses immediately came to mind. I daresay, these two are among the most recognizable character actresses in classic films: Ann Doran and Lurene Tuttle.

If you were in the middle of a NYC rush hour, say in the heart of it around 5:30, and you heard her voice in the middle of the hustling bustling cacophony of humanity moving through Grand Central Station, you would know instantly it was Ann Doran. Born in Amarillo, Texas on July 28th, 1911 she began acting at age four in silents, using assumed names to hide “Acting” from her father’s family. Later, she wound up at Columbia Studios where she made the rounds as a stand-in, bit player and worked her way up to supporting player. Checking out her credits on IMDB, Doran is listed most of the time as “uncredited.” But boy, did she pay her dues.

I can’t tell you when she registered specifically in my cinematic consciousness, but most likely it was her voice that reached me first. She was everywhere; not like the ubiquitous John Ridgely, but pretty much anywhere you needed a waitress or secretary or wife. I would place Ann in the working class end of things because of the timbre of her voice and her movie professions. She was also the best “best friend” a girl could EVER have (if you didn’t travel in Eve Arden’s tony circles. I say anything Eve can do, Ann can do.) Doran could toss a line or raise one eyebrow with the best of ’em. She’s Rosalind Russell’s secretarial school classmate and best friend in ROUGHLY SPEAKING and Irene Dunne’s good co-worker and friend in PENNY SERENADE.  She pleads with “John Doe” not to jump off the roof in Capra’s MEET JOHN DOE. (She is wife to soda jerk Regis Toomey in that film). She also tries to hook up John Garfield and Eleanor Parker in PRIDE OF THE MARINES where this time she IS the wife of John Ridgely.

She is also in one of my favorite movies: THE STRANGE LOVE OF MARTHA IVERS. I love this film and you might call me silly, but in this heavy-duty film noir with all those heavy weight A-listers, I wait for Doran’s scene where she plays Kirk Douglas’ secretary. With her shoulder length hair and crisp white blouse she gets to be flirty and sassy with the movie’s lead, Van Heflin, for almost five minutes of screen time. She makes the most of it too. Please check out MARTHA IVERS and watch how she hands Heflin a pencil. She’s a pip in just a few short sexy moments with Heflin.

If Ann has a “claim-to-fame” role, it would be as James Dean’s mother in REBEL WITHOUT A CAUSE. Her character is a domineering wife and mother. She doesn’t want anything upsetting the suburban apple cart or her family’s standing in the community. She doesn’t want to get involved. She doesn’t understand her son, nor he her. Their scene on the staircase crackles.

Even with director Nicholas Ray giving James Dean carte blanche as the troubled youth, this old school actress crosses swords with the meteoric Dean holding her own line for line, emotion for emotion. I think directors give Ann Doran free reign to craft her characters anyway she wants, because she is a pro. She could create a whole life with a few understated strokes and in a few short minutes of screen time. I’m a big fan.

What can I say about Lurene Tuttle other than “I love her.” She’s equal parts fuss-budget and no-nonsense, common sense.

Born August 29th, 1907 in Indiana, she is from a somewhat theatrical family where her father played in minstrel shows, and her grandfather was a drama teacher. Eventually, Lurene made her way west to the Pasadena Playhouse ( a starting point for many future successful actors), and also travelled with a vaudeville company. Because of her great
speaking voice, Lurene found her niche and became known as the “First Lady of Radio” where she played a wide variety of genres: (dramas, comedies, thrillers and soap operas. ) She was also famously known as the voice of Effie in the radio show “The Adventures of Sam Spade” with Howard Duff playing the detective.

“I could play opposite Jimmy Stewart or Fredric March or Cary Grant or Gary Cooper and Leslie Howard, and on the air, I could be the most glamorous, gorgeous, tall, black- haired female you’ve ever seen in your life. Whatever I wished to be, I could be with my voice, which was the thrilling part to me.”

You’ve seen her in countless movies and tv shows (“Julia.”) She was Mr. Blandings’ put upon secretary in MR. BLANDINGS BUILDS HIS DREAM HOUSE and she worked opposite Marilyn Monroe in NIAGARA as the cereal king’s wife. Always good-natured, you could tell that she always had her husband in check. Of course who could forget Lurene in PSYCHO.

The heavy drama with its murders doesn’t leave room for a lot of laughs in Hitchcock’s film. But he manages to throw in just a ray of light with Tuttle’s performance as the Sheriff’s wife (played by that other character actor extraordinaire, John McIntyre). Lurene plays it just a little left of center without going over the top. While everyone is concerned with Norman Bates and who’s buried out in the cemetery, I sit and wait for Lurene to say “periwinkle blue” or cock her head when she says Norman’s mother was found “in bed” with her lover. I dunno, but it makes me smile every time. She does a great dramatic turn in TOMORROW IS ANOTHER DAY a film noir starring Steve Cochran and the Mighty Roman, Ruth Roman. In it, Lurene befriends a very nice couple, not knowing they are on the run. 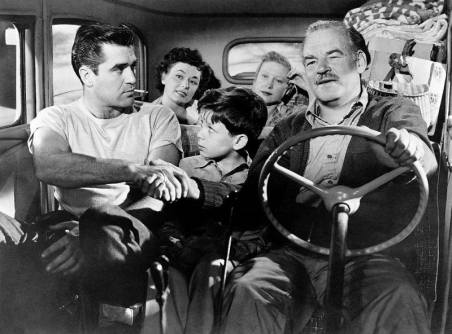 When she gets wind there is a reward out on her friends, she has to make an agonizing decision whether to turn them in for the much needed money or help them escape.

Though Ann Doran and Lurene Tuttle appear in A-list pictures, they don’t have the “burden” of carrying the movie with their name above the title. Most times they are in and then out in a flash, leaving behind a whiff of smart efficient homey likeability. When I see them on the screen I usually say aloud: “Hey!” I stop and watch until they’re gone. Perhaps they don’t have any distinguishing roles that catapulted them front and center of the Red Carpet line. But that’s okay. We know them. They are our secrets. They are our treasures. They were working actresses well into the 1980’s. Keep your eyes and ears peeled for them.

Thanks so much to Aurora at Once Upon a Screen, Kellee at Outspoken & Freckled and Paula at Paula’s Cinema Club for letting me share my love of these two fine actresses with all of you. Having read through some blogs and blogathons (who says you can’t learn anything from the movies?) I’ve decided to throw my own hat into the ring and join the fun. Come January, I hope to add to the wealth of information and love of classic films with my very own blog: CineMaven’s Essays from the Couch. I hope you’ll all stay tuned.