Crime and punishment have been matters involving couples ever since Adam and Eve. The melding of two like-minded individuals in constant close proximity has led to crimes and crime sprees of historic proportions. Perhaps more interesting, however, are the smaller crimes involving couples of unlike minds. Those are a lot more common, the crimes that involve one person turning the violence against the other. And if either member of the couple is unhappy and feels tied to the other – as in by marriage – ugly things can and do result fairly often. That’s particularly true with regards to the female member who is the likely victim. Crime statistics may rise and fall depending on the year, but one manages to remain steady: female homicide victims in the U.S. are three times as likely to be killed by a male intimate partner such as a husband or boyfriend than males in similar partnerships. In fact, that specific type of crime is the oldest one in the world. Just ask San Francisco Assistant DA Thomas Krasny who has had a lot of experience prosecuting murdering low life spouses. Krasny’s latest case fits that bill perfectly. He is prosecuting Jack Forrester who is accused of brutally murdering his wife Page and their maid with a jagged edge hunting knife in Richard Marquand‘s Jagged Edge (1985).

The opinion of a famous District Attorney is valuable, but one really doesn’t have to be an expert to understand why Page Forrester’s husband is charged with her murder almost as soon as her body is discovered in the bedroom of the couple’s beach house. Spouse on spouse murders can have complicated psychological issues behind them that are not easily deciphered, but when money enters the picture the why of the crime usually becomes clear. Jack Forrester paints this kind of clear picture. Mr. Forrester is a young, successful publisher set to inherit his wife’s huge estate. Done deal. Except things are not always as they seem in Jagged Edge.

The handsome Jack Forrester (played by the equally handsome Jeff Bridges) is stylish, sophisticated and measured. In other words, he’s not the kind of man who would commit a murder better suited for a madman. Not only was Mrs. Forrester mutilated with the jagged edge knife, but the word “bitch” was written on the walls with her blood, an act that points to a deep-seated hatred and loss of civility that Jack Forrester doesn’t demonstrate. And once charged Jack Forrester realizes that’s his best defense. He needs to sell the image of perfection he exemplifies. Unfortunately for him, however, DA Krasny (Peter Coyote) doesn’t buy into Forrester’s story from the get-go. In fact, Krasny admits that, “If I were to kill my wife, that’s exactly the way I would do it.” In other words, Krasny would go to an incomprehensible extreme. And I’ll be damned if Krasny’s point is not a great one! Indeed, it’s difficult to wrap your head around the possibility that the gorgeous Jack Forrester might be capable of committing a crime such as was committed. It stands to reason then that Mr. Forrester would want to bring that point home to twelve jurors with the help of a female attorney from a prominent law firm who believes him.

Teddy Barnes (Glenn Close) has a long and reputable law resume under her belt, but she hasn’t practiced criminal law for years. As a former prosecutor, Teddy quit criminal cases after the Henry Styles case, a case that resulted in the conviction of an innocent man thanks to the legal misconduct of the lead attorney on the case – Thomas Krasny. Teddy Barnes has been living with the guilt of not having said anything about Krasny’s actions while knowing the innocent Henry Styles is rotting in a jail cell. Coincidentally, just as the Forrester investigation is getting started Teddy learns that Styles has hanged himself. Due to all of that when Jack Forrester asks Teddy Barnes to defend him she flatly refuses. The last thing she wants is to get mixed up with the likes of Krasny again and be responsible for another man’s life. But when Teddy visits her long-time friend, Sam Ransom (Robert Loggia), a former DA investigator who worked with her on the Styles case, he convinces her to take the Forrester case. It is the type of high-profile case that can set her up for life. Teddy Barnes agrees to meet with Jack Forrester with the caveat that she won’t defend him unless she believes in his innocence. And…well, this poses absolutely no problem for Jack who turns on the charm and begins to romance Teddy who buys into the entire package he offers…and a thrilling, layered courtroom drama ensues. 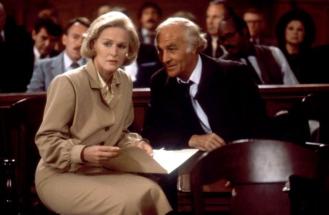 Henceforth spoilers aplenty. I do not divulge whether Jack Forrester is responsible for his wife’s death, but I mention enough to spoil Jagged Edge if you’ve never seen it.

What makes Jagged Edge such an enjoyable thriller is the fact that it plays with the audience in an unapologetic way. As you watch this movie it’s highly likely that your allegiance will turn toward and away from Jack Forrester several times. Its intent is to keep you guessing and in that it succeeds. For instance…

What are some of the things that point to Forrester’s guilt?

All of these things result in a push and pull in the minds of the viewer, which makes for a compelling whodunit and enjoyable conversation. The blatant manner in which Jagged Edge hangs each clue before our eyes dares us to take a side – over and over again. We may each believe one thing or another, but the truth is not revealed until the very last shot, which is when we are either proven right or proven wrong. Interestingly, the last time I watched Jagged Edge was with Theresa Brown, the host of the ‘Till Death Do Us Part Blogathon for which this post is intended. Theresa told me she believed Jack Forrester innocent when she first watched the movie while I believed him guilty. There you have it.

Jagged Edge received mixed reviews when released in 1985, but audiences responded well to it and I love it. If I had a list of favorite movies from the 1980s this one would be on it although it is not a perfect movie. I can probably come up with a few solid things wrong with it fairly easily. For instance, the scene where we see the grieving Mr. Forrester scatter his wife’s ashes in the ocean nags at me. I can’t get into the details of why it bothers me without divulging the movie’s final outcome, however, so you’ll have to be satisfied with that for now. The important thing is that despite its few flaws Jagged Edge should be included on the list of memorable spousal murder-related thrillers. Here are a few more reasons why…

You’ll have to watch Jagged Edge to learn the movie’s final resolution. Since that resolution goes beyond the trial of Jack Forrester, however, I can tell you that he is acquitted of the murders of Page Forrester and the maid. In a couple of days I’ll be back with another upper crust spousal murder case. This time, however, the husband dials ‘M’ and the wife survives.

Be sure to visit CineMaven’s Essays from the Couch and the ‘Till Death Do Us Part Blogathon on Monday, July 24th. It’s sure to be murderous fun. 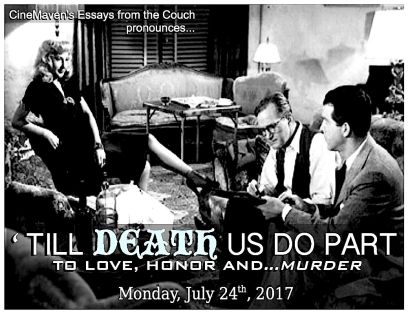 *Contemporary – to this blogger is anything after the classics era.