One would think that Elvis Presley could convince anybody to do anything quite easily…unless that “anybody” is a hillbilly.  Because of that things get mighty messy for Elvis in Kissin Cousins when he – as Army Lieutenant, Josh Morgan – is assigned a key role in operation “Big Smokey.” Josh’s mission is to convince his distant relatives, the Tatums, to lease part of their land to the government for missile launching.  Not unlike other disenfranchised communities the Tatums are distrusting of the government and have no interest in changing their lives or even worse, allowing army critters to disrupt their peace.  When Josh tries to enter Tatum land along with his Captain, Jason Salbo (Jack Albertson) they’re met with gunfire.  The Tatums shoot first and ask questions later – iffin the trespassers are still alive for a conversation.

Once the Tatums learn that Josh is kin, however, they drop their guards.  Or most of them do in any case.  Pappy Tatum (Arthur O’Connell who’d played Elvis’ father in Follow that Dream three years earlier), Ma (Glenda Farrell), their daughters, Azalea (Yvonne Craig who’d co-starred with Elvis in It Happened at the World’s Fair the year before) and Selena (Pamela Austin) welcome Josh with open arms.  But Pappy and Ma’s only son, Jodie Tatum (Elvis), who also happens to be Josh’s twin cousin is none too happy to have competition.  You see, female critters far outnumber male critters in them thar hills so Josh, with his dark, slim frame and rock-n-rollin’ talents quickly becomes the center of attention.

Cousin Jodie, who is supposed to be the mirror image of Josh ‘cepting his blonde hair is the prime beefcake until Josh shows up.  The slow-witted Jodie’s claim to fame is that he’s the wrestling champion of the area.  In fact, Jodie barely utters a word about anything other than wrestling and we learn he has some talents with the ladies, which makes him barely a step up from a walking hormone,

While the U.S. military has left operation “Big Smokey” in Josh’s capable hands, the Lieutenant has to fight off the attentions of cousins Azalea and Selena who compete for him as does an entire group of wild, man-hungry women called the Kitty Hawks.  Mayhem ensues as Jodie tries to wrestle anyone he can, the Kitty Hawks set traps for the men and the army folk try to survive the moonshine and typical hillbilly vittles of stewed possum and some kind of fish eyes that enhance flavor.  There’s also time set aside for a few production numbers and the requisite, scantily clad girls are strewn about everywhere.  Whenever I watch Kissin Cousins, by the way, I think it could do with a touch of The Wistful Widow of Wagon Gap and a Marjorie Main cameo to spice things up a little.  Unfortunately that never happens.  Here’s the complete cast list so you can see who does show up on Tatum land.

Anyway – while we are getting to know the Tatums and life in the Smokey Mountains, Pappy Tatum maintains his stance against the government setting up shop anywhere near his home.  Eventually though Josh is able to reach an agreement with the old man just as the General arrives to investigate what’s taken the mission so long.  By that time there is a long list of new couplings.  Josh and Azalea will be married, which is a relief because of course one wants Elvis to end up with Batgirl.  Older sister Selena couples with another soldier and Jodie has fallen for a WAC named Midge (Cynthia Pepper).

I imagine the prospect of playing dual roles in a movie may have offered some degree of excitement to Elvis Presley who was quite dissatisfied with his film career by 1964.  We know he hated having to sing those inane movie songs and acting in movies with recycled scripts over and over again.  Unfortunately, it’s likely Kissin Cousins served to deepen Elvis’ disgust because not only did it not pose an opportunity for him to stretch his acting muscles, it probably petrified a few he’d previously honed.  The duals roles he plays in Kissin Cousin are for naught.  Only the brunette Elvis is a man of substance although the predicaments he’s put in are outrageous.  Blonde Elvis, on the other hand, is outright painful to watch.  Even for me.

If you don’t have a problem with the strawberry blonde wig, which Elvis himself hated and which nearly makes Elvis look less than beautiful – and if you can ignore Jodie’s inane dialogue then you might enjoy the double dose of Elvis in Kissin Cousins.  I mean, you do get more of him even though you can tell when it’s Elvis’ double, Lance LeGault and not Elvis himself in several scenes when the two cousins share the screen.  I find that a tad bit annoying, but all of this complaining doesn’t mean Kissin Cousins is a total bust.  There are a few good laughs to be had thanks (mostly) to Jack Albertson who approaches the material with zest and Cousins also features a few catchy tunes.  The movie’s soundtrack actually peaked at number six on Billboard’s Top LP chart and was later certified gold.  Audiences could never get enough of Elvis.

I have to be honest though.  I find the plot of Kissin Cousins particularly cheesy even though the movie was nominated for Best Written American Musical by the Writer’s Guild of America, a rather surprising tidbit given some of the other musicals released in 1964.  Those include the likes of My Fair Lady, Mary Poppins and Elvis’ own Viva Las Vegas and Roustabout, both of which are far superior to Cousins.  Regardless, people went to see it and Kissin Cousins made money.  Despite the quality of some of the productions Elvis starred in he was as secure a box-office draw as there was and the critters at MGM weren’t about to change a successful formula.

If I’d been around in 1964 I would’ve rushed to the local theater to watch anything Elvis.  I would have been particularly excited about a movie that features TWO Elvises as Kissin Cousins does. Unfortunately, today this is among my least favorite of all Elvis vehicles, but I chose it as my entry to the Dual Roles Blogathon hosted by Ruth at Silver Screenings and Christina Wehner because…well, it’s still Elvis.

♦
Be sure to visit the Dual Roles Blogathon hosted by Christina Wehner and Ruth of Silver Screenings.  They’ll have you seeing double at every turn. 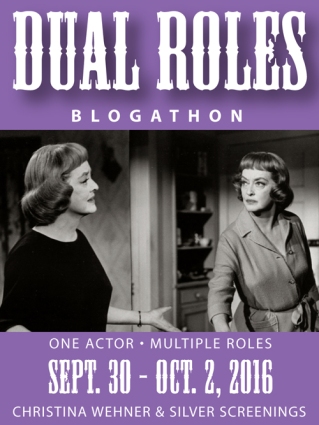