Since I’m spending the day listening to New York City private detective Mike Hammer on the radio it’s only fair that I should share some good, old-fashioned noir with you.

As you probably know, Mike Hammer – as hard-boiled and treacherous a P.I. as there ever was – was the creation of Brooklyn-born pulp novelist, Mickey Spillane (March 9, 1918 – July 17, 2006). Hammer was introduced in Spillane’s 1947 novel I, the Jury, which reportedly took him just six days to complete. I, the Jury was adapted for the screen in 1953 with a vehicle directed by Harry Essex and starring Biff Elliot as Mike Hammer. 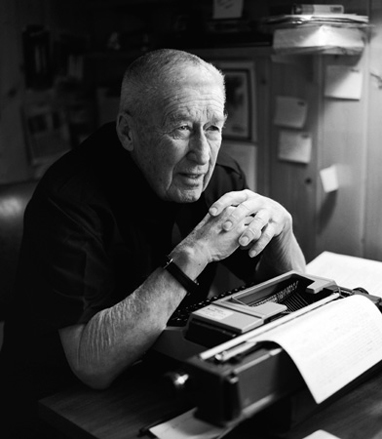 Mickey Spillane’s critics were many with the majority condemning the extent of the violence in his stories. Here’s what Spillane thought about that…

“Those big-shot writers could never dig the fact that there are more salted peanuts consumed than caviar.”

“I don’t want to arrest anyone. I just want to shoot somebody.” — Mike Hammer in I, the Jury

Fortunately for Mickey Spillane audiences loved his stories – critics be damned – and Spillane’s books were instant best sellers. Some sites list him as one of the best-selling mystery writers of all time. So, it’s no surprise that Hollywood came calling in 1953, at the height of Hammer’s popularity. Several more movies would follow with Robert Aldrich’s Kiss Me Deadly (1955) starring Ralph Meeker as an enjoyable, particularly bitter, no holds barred Mike Hammer being my favorite of the bunch. TV’s fascination with Hammer would last through the 1990s with three series and numerous made-for-TV movies featuring the famous detective produced.

Today we focus on radio, however, and The Hammer Guy series, which made its debut the same year Mike Hammer made it to the movies. Compared to Spillane’s novels, The Hammer Guy is tame, but still quite enjoyable. The series was not written by Mickey Spillane, however, but by Ed Adamson who wrote for some of the best Western and crime TV shows since the mid-1950s. Given that each episode of The Hammer Guy is only a half-hour long, I think you’ll find the stories satisfyingly gritty if you go for that sort of thing, which I do. It’s really a shame the series only last from January through October 1953, probably due to the fact it had to compete with the wonder of television.

I won’t delay any longer in showcasing episodes of The Hammer Guy, but I do want to spotlight the actors who I think will impress you. Larry Haines, whose face you might recognize as Speed, one of Oscar and Felix’s poker-playing friends in Gene Saks’ The Odd Couple (1968), is terrific as Mike Hammer. Haines’ voice is perfectly suited for the back alleys and smoke-swirled rooms that come alive as you listen to these stories. Ted De Corsia replaced Haines and did a decent job with Hammer, but (for me) some of the grittiness was lost.

Although she’s best remembered for comedic roles or as Palmolive’s Madge, Jan Miner plays it heavy as one of the most memorable broads of any noir radio series I’ve ever listened to. Richard Lewis was the director of the series. Lewis had experience from such memorable radio series as The Falcon and Murder and Mr. Malone, both of which I highly recommend.

The Hammer Guy aired on The Mutual Network, but take a look at the following mentions in Billboard Magazine, which suggest a somewhat unsteady road for the series before it landed at Mutual:

Now, enjoy That Hammer Guy from “The Mickey Spillane Mysteries”

“Contract on a Dead Man”

“The Dead Dame in the Park”

Wait…there was a Mike Hammer comic too… 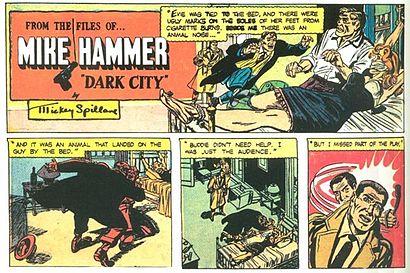 …and the rest is down and dirty history.