Perseverance: steady persistence in a course of action, a purpose, a state, etc., especially in spite of difficulties, obstacles, or discouragement.

There are numerous heroes in film and television from which we can learn valuable lessons. But one could argue that it’s the ordinary person who beats the odds that we can learn the most from.  I have chosen such a character, a rabbit to be exact, as my subject for the Things I learned from the Movies blogathon.  The rabbit is none other than superstar Bugs Bunny who became an A-lister, but always maintained the run-of-the-mill rabbit quality that we can all identify with.  That quality coupled with Bugs’ talent for rabbitfying perseverance are why he became one of my role models.

I’ve admired Bugs Bunny since I was a child.  So used to his beating the odds was I that I lost sight of the goal and concentrated instead on the way he did it.  That goal was either to keep from being shot to death or humiliated in some way.  Bugs would go to extraordinary measures to be the victor, which is the lesson I’m here to discuss by way of a few classic examples.  You may be asking yourself, “what makes Bugs Bunny the kind of rabbit we should all want to emulate?”  Well, I’ll answer that for you.  He. Just. Never. Gives. Up.

Unlike other characters we love like Wile E. Coyote with his never-ending quest to eat the Road Runner or Sylvester and his voracious appetite for Tweety Bird, Bugs never plans the situations he finds himself in.  He’s usually minding his own business when some other character forces him to take action.  Like most heroes Bugs steps up and rules the day against angry, huge opponents who carried all types of weapons.  Oh yeah, Bugs should be admired for a host of things.  He’s patriotic, funny, resourceful, optimistic, unpredictable, clever, arrogant and defiant.  All qualities useful for one to make it against insurmountable odds – or beat nasty bullies.  But that’s not all.  And that’s not the reason I’ve learned so much from him.  You see, Bugs Bunny doesn’t simply beat his enemies and walk away.  Bugs’ perseverance goes beyond just winning at something.  It’s cerebral.  Bugs goes at it and at it and at it until his foe is ready to yell UNCLE! and then he’d go in for the lesson.  Bugs Bunny could outsmart Einstein without the famous genius even being aware of what had just happened.  Bugs tries everything and always manages to have anything he needs at his disposal.  He could also convince anyone (or any duck) of anything.  Once Bugs Bunny is called to action there’s no turning back.

It’s important to also mention that although one can learn from perseverance masters such as Bugs, he didn’t learn it from anybody.  If you take a look at A Wild Hare, directed by Tex Avery (1940), which is widely considered to be the first official Bugs Bunny cartoon, you’ll see the same type of steady determination and coolness under pressure that Bugs exhibits in all outings.  Clearly Bugs was created with this trait, which is why he is the rabbitfication of perseverance.

I chose the following examples at random to illustrate how Bugs’ perseverance is what saved the day.  Each is a lesson in sticktoitiveness, but you can watch any of this star’s vehicles and be the wiser as to how to approach all manner of situations with his unique sense of purpose.

The Gas-House Gorillas are playing the Tea Totallers at the Polo Grounds.  The game is 94 to zero in favor of the Gorillas, a group of huge, menacing thugs who delight in beating the opposing team, which is made up of old fogies.  Watching the game from his hole on the field is Bugs Bunny who can barely put up with the abuse.  Bugs is harassing the Gorillas and in doing so tells them he can beat them singlehandedly and so he does with a score of 95 to 96.  The fact that Bugs wins the game is expected, but one is in awe of the way he goes to extreme lengths to do so.  He shows us that no matter how small a rabbit is he can beat a band of huge bullies if he puts his carrots to it.

Bugs plays all of the positions on the Bugs team, which results in a few unbelievable situations.  For instance when he pitches he also catches his own pitch.  While Bugs may resort to a few activities that I’m sure are against the rules of baseball, you can’t deny his instinct and natural talent – particularly as a fielder.  The ending to Bugs’ display of perseverance in the face of diminishing odds in Baseball Bugs is illustrated by how he wins the game.  Picture this:

It’s the bottom of the 9th.  The Gorillas are down 95 to 96, but they have one guy on base and their biggest thug is at the plate.  Bugs goes through his wind-up and…HOLY COW!  it’s flying outta the park as if it had wings.  Bugs panics for a mere moment, but then puts his mind to catching the ball at all cost, which means he is forced to take a cab, go up an elevator to the roof of a skyscraper and climb the flagpole at the very top.  And guess what?  He catches the ball!  Is there a greater example of perseverance in sports?  I don’t think so. Not even Mays or DiMaggio could do that.

This Looney Tunes entry presents Bugs Bunny another dangerous set of circumstances he manages to get out of.  On his way to the big Carrot Festival at the Coachella Valley Bugs makes a wrong turn at Albuquerque and ends up at the center of a bullfighting ring while the action is taking place.  The bullfighter who is trying to save his own hide can’t help Bugs with directions so while the rabbit is trying to read the map the bull sends him flying.  As Bugs says while his butt is seeing stars, “Of course you realize this means war.”  Wt this point we know he’ll better the bull, but how?  Well, first things first.  When next we see Bugs he is wearing a perfectly fitted bullfighter’s suit and is ready to give the bull a bit of his own back.

I’d be remiss not to mention that things get hairy for the rabbit in Bully for Bugs because his adversary is a powerful, bad-tempered bull who is also quite resourceful.  At one point Bugs even writes his last will and testament and says a few prayers.  That said, Bugs still manages to come out the victor in style.  Instead of simply beating the beast Bugs taunts him until the bull loses his temper and falls prey to any number of ingenious traps.  I need not explain further how Bugs Bunny exhibits perseverance in Bully for Bugs.  While it would no doubt be easier to simply leave the arena, he sticks with it at his own peril.

This is one of my all-time favorite cartoons, but it wasn’t until I undertook the perseverance task that I knew exactly why.

Rabbit Seasoning tells the story of Daffy Duck who is trying to convince master hunter, Elmer Fudd, to shoot Bugs Bunny because it’s rabbit season.  In truth it’s duck season but Daffy is trying to get out of a jam.  Daffy places signs all over the place announcing “Rabbit Season” and even goes so far as to place fake rabbit paw prints leading up to Bugs’ hole.  Elmer buys the story lock, stock and barrel and is overjoyed at the prospect of getting his first kill.  But Bugs never sweats it.  All he has to do is keep his cool and trick Daffy into admitting he is the one that should be shot.  And he does so over and over again just with smarts. Bugs even gets away with dressing in drag in an attempt to escape the hole, an idea he gets on the spot, which also makes him incredibly creative.

While we must give the hearty laughs to Daffy Duck in Rabbit Seasoning, Bugs gets all points for brains. Despite the odds against him, Bugs manages to escape unscathed by using play-on-words, while Daffy is constantly getting his beak blown off.  His calm demeanor under serious threat is testament to this rabbit’s perseverance, which brings to mind a line from A. A. Milne’s Winnie the Pooh, “Rivers know this: there is no hurry.”  If you beat your enemies with wit and wiles they’ll remember it better than a bruise. 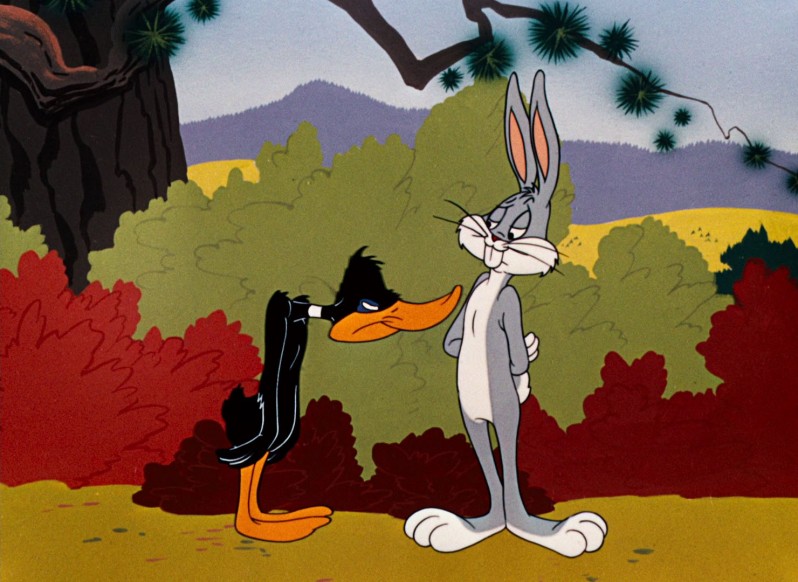 Bugs Bunny has the self-confidence to walk into difficult situations and persevere without batting an eye.  I will forever be awestruck by that fact.  Unfortunately, even though Bugs has long been my role model, I can’t say that I’ve succeeded in emulating him.  I’ve neither his agility of mind or agility of body.  I can tell you, however, that I refer to how he handles situations when I need to get out of a jam.  And when all else fails I ask, “What would Bugs Bunny do?”  Hey, Wilder had Lubitsch.  I have Bugs Bunny – the standard in perseverance.

I urge you to visit the Things I learned From the Movies blogathon hosted by Speakeasy and Silver Screenings.  This event promises to be a hoot with a stellar variety of entries to learn from.