A few days ago I was looking for a bottle of wine to take to a friend’s house and it caught my eye as I turned into the aisle where the pinot noir sit ripe for the picking.  I grabbed the dusty bottle off the shelf as it stood among dozens of others.  Cradling it in my hand I considered the label on which was noted “Naked truth #8 – Silence is Powerful.”  As I thought about it Charlie Chaplin and the film he made that proved that truth came to mind, the film that I chose as my favorite for the My Favorite Classic Movie Blogathon.  That label was a sign that I’d made the right choice.  The next day I would sit and watch that silent masterpiece that took almost two years to make, City Lights.

Charlie Chaplin, a vocal proponent of silence as the ultimate expression of art made City Lights three years into the sound era in the movies.  By 1931 most Hollywood filmmakers either embraced talking pictures or resigned themselves to their inevitability.  Some gave up making movies entirely.  Chaplin, who had the clout and control few others had, held firm with his vision for this film and the result is one of the greatest cinematic achievements in history. “It flows as easily as water over pebbles.” – Critic, Alistaire Cooke In truth, City Lights is somewhat of a crossover film – from silence to sound.  The movie features a full, synchronized musical score written by Chaplin, includes sound effects and begins with people talking although the words are unintelligible, perhaps an opening jab to talkies by the director.  But no other words are uttered at all and Chaplin’s Little Tramp, by this time the most recognizable character in film, remains silent, which probably had something to do with the actor/director’s decision to make this film silent as it would probably not serve the character well otherwise.  And what a character he is – open to love and adventure in a way we should all aspire to.  The Tramp has a heartbreaking quality that makes him relatable to everyone, while his optimism and inventiveness lend themselves to hearty laughs.  He is the ultimate underdog and it’s impossible not to love him. 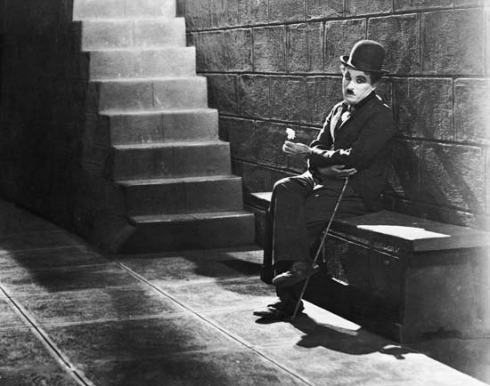 Unlike several of the other classic movies I hold dear like Meet Me in St. Louis and Sunset Boulevard, both of which I saw as a child, I wasn’t introduced to the charms of City Lights until I was in my twenties.  More familiar with Chaplin short subjects, I’d never ventured forth into his features until I came upon this movie and was blown away by its sheer magnificence.   As I imagine is the case with all who watch it the gamut of emotions surface with each and every viewing.  One cannot help but be drawn into the world of the Little Tramp, to root for him because he tries so hard.  We are enchanted at every step along his path as he tries to beat the odds with admirable intentions.  And…what he does for love…oh, my.  To help the blind flower girl he falls for the Little Tramp puts himself in oft precarious situations.  We laugh heartily, but underneath there is always that little tug to the heart.  And the resolution to this story may well have resulted in the greatest moment ever captured on film.

I can’t even think about it without getting misty. City Lights is a comedy romance in pantomime as described in the title card.  The perfectly choreographed sequences render the film a classic for the ages.  On this day when we celebrate National Classic Movie Day I could think of no better example of a timeless movie that like the character it features defies the odds.  This one is food for the soul.

Today City Lights is considered a masterpiece by most far and wide.  Many filmmakers of note – people like Orson Welles, Stanley Kubrick, Woody Allen, Federico Fellini and Aurora – have listed this movie among the greatest ever made.  But what actually makes City Lights great is that it is personal… I was sitting in my parents’ apartment this week watching City Lights in preparation for this commentary.  The humble space they inhabit sees little cause for laughter these days.  In fact, I can’t remember the last time I heard that sound within those walls.  As the film started both my parents sat to watch – unprompted and uninvited – and soon a wonderful sound filled the air.  “No one could ever equal this guy,” my father said of the man on the screen scraping a bald man’s head thinking it was cheese spread.  And again as the Tramp tries to avoid getting hit during a boxing match.  There are too many moments to list, but they were moments during which I felt real, honest to goodness joy.  There was no language barrier.  Not once did either of them ask me to translate what was being portrayed on the screen.  The art transcended language.  It seems I’d forgotten the magic of the movies and Naked Truth #8 – “Silence is powerful.”  But the proof was ringing in my ears.  Perhaps the greatest sound in the world brought about by a silent masterpiece – my parents’ laughter and a favorite movie.  Heaven.

This post is my submission to the My Favorite Classic Movie Blogathon hosted by Classic Film and TV Cafe.  Rick, the grand master of the Cafe created this event in celebration of another wonderful brainstorm he had, the first annual National Classic Movie Day.  While so many of us take every possible opportunity to immerse ourselves in classic movies it’s wonderful to dedicate a day out of the year where everyone can come together as one to honor our beloved classics.  I hope all of you are able to set aside some time today to dedicate to a classic movie. 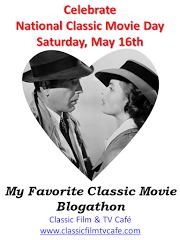