Nineteen Hundred and Thirty Three brought us one of the greatest movies ever made, a story that stretched our collective imagination to its limits and introduced one of filmdom’s greatest heroes. That movie is, of course, King Kong, which combined the passion and talent of producers Merian C. Cooper and Ernest B. Schoedsack with a beauty for the ages in Fay Wray. Before making history with Kong, however, these talents assembled to make a largely unknown gem entitled The Most Dangerous Game, a chilling story about a big-game hunter whose prey is the world’s most exotic creature. 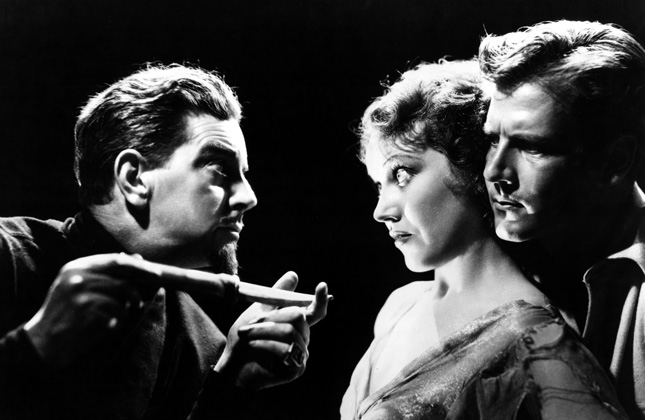 Directed by Ernest B. Schoedsack and Irving Pichel, The Most Dangerous Game is based on a short story by Richard Connell, which was also published as The Hounds of Zaroff and originally appeared in the January 19, 1924 edition of Collier’s. The story became one of the most anthologized of all time with several film adaptations aside from The Most Dangerous Game. It was remade as A Game of Death (1945) helmed by Robert Wise, Ted Tetzlaff’s Johnny Allegro borrowed much of the story and put it in a film noir world, and Roy Boulting’s Run for the Sun (1956) offers another take. There are a few others as well, but The Most Dangerous Game was the most successful and got my vote for best of the lot. The story also had numerous turns on TV and radio. On that medium, I highly recommend the Suspense outing from 1943 starring Orson Welles as Zaroff. It is no wonder too that this story was given such varied attention through the years. Its premise is terrifying.

Our story opens on a luxury yacht on which famous author and big game hunter Bob Rainsford (Joel McCrea) is a passenger. Bob and the other passengers are having a great time discussing hunting during a conversation that proves prophetic. “There are two kinds of people in the world,” Rainsford says, “those who hunt and those who are hunted.” He then continues by saying he believes the hunted appreciate their position because it’s about the game. Well, we’ll see about that.

Before you know it, the yacht runs aground leaving Bob Rainsford the only survivor. Bob swims to the nearest island where he comes upon the house of Russian Count Zaroff (Leslie Banks in his credited film debut). Zaroff quickly invites Bob to be his guest, which is nice, but odd considering there are four other guests in the house, all of whom were also shipwrecked: Eve Trowbridge (Fay Wray), her brother Martin (Robert Armstrong, another Kong alum), and 2 sailors.

As luck would have it, Zaroff is also a hunting aficionado and the conversation that evening centers on the host’s obsession with the subject. Zaroff explains how he has found a new and exciting prey after becoming bored with the sport. No one is the wiser as to exactly what Zaroff means, but Eve becomes suspicious when the two sailors disappear later that night followed by her brother, Martin. Bob is not convinced until he and Eve go to Zaroff’s trophy room and see a human head on display. Now they know what Zaroff is up to and they become his next prey. Bob Rainsford must go out on the island with Zaroff and his dogs in pursuit. If Bob can stay alive until sunrise then Zaroff would let him and Eve go free. Being the smart woman that she is, Eve decides to run with Bob, rather than stay behind in Zaroff’s house. The two run for their lives through the jungle while a mad man hunts them. 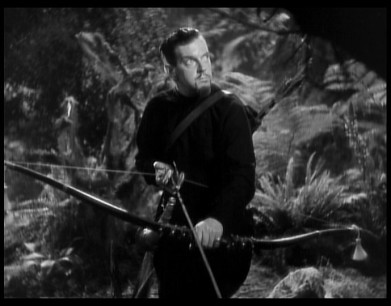 ZArloff hunting with one of his many weapons

Wray and McCrea on the run in THE MOST DANGEROUS GAME

The Most Dangerous Game has a lot going for it. Leslie Banks, who caught the eye of the public with his portrayal of the demented Zaroff, is terrific in the film. I view his sadistic Count second only to Charles Laughton’s Moreau in Island of Lost Souls in the evil for evil’s sake category. Fay Wray and Joel McCrea make a stunning couple and there’s no doubt you root for them every second with heart in mouth. McCrea is fantastic as an action star in this and there are several noteworthy sequences as the two have narrow escapes in the jungle. Wray does not get a lot to do, but she is memorable in her scenes. Finally, a shout out must go to Max Steiner’s thumping score, which goes far to ensuring a heartbeat or two goes faster than planned.

I have read that The Most Dangerous Game was originally about 78 minutes long. The only version I’ve seen is about 63 minutes long. If this is true then Fay Wray’s original scenes could possibly have been more substantial and the portion of the iconic Kong gate that is supposed to make an appearance actually does. I did not see it. There are also scenes that show Wray and McCrea scantily clad as they run through the jungle. This movie was made before the Hays Code went into full effect, but there are mentions that it was not publicity shown for decades due to its indecency. The version I saw was quite decent. Darn!

Since I have Victoria Riskin’s book and a slight connection to Joel McCrea’s grandson, Wyatt through his wonderful Docent, Becky Metzgar, I thought I’d add some behind the scenes goods. Becky was kind enough to reach out to Wyatt on my behalf and he shared a couple of fun facts the first of which concerns the Great Danes featured in The Most Dangerous Game. As it turns out, the dogs who are supposed to be loyal to Zaroff as part of his hunting team, actually loved Joel McCrea. According to Wyatt, “They had some difficulty in getting the dogs to stay with Zaroff as they wanted to go play with my granddad!” Wyatt also said that Joel had fun making the movie and enjoyed working with Fay.

From Fay Wray’s perspective, The Most Dangerous Game is a particularly interesting movie. Most people know that some of the standing sets from King Kong were used in the making of this film and that Kong was a tremendous challenge for all involved. The actors were required to work unusually long hours on physically demanding scenes. Imagine then being Fay Wray who was doing extensive films tests for Kong while filming The Most Dangerous Game. As Victoria describes it in Fay Wray and Robert Riskin: A Hollywood Memoir, “Between takes on Dangerous Game, she (Fay) jammed on a blonde wig and ran with Coop (producer Merian C. Cooper) to the other set. It was Coop who had my mother work for twenty-two consecutive hours one day and scream for eight hours on another.”

Lest you get a negative impression of Cooper, Riskin goes on to say that when the abusive hours were brought to his attention, he changed his demands. By her account, Merian C. Cooper was a decent man and Fay Wray trusted him. Together they made three films – The Most Dangerous Game, King Kong and the first in 1929, The Four Feathers.

The Most Dangerous Game was released in September 1932, paving the way for what would be a stellar time in Fay Wray’s career. To give you an idea of the kind of popularity Wray enjoyed in the early 1930s, consider that she starred in 11 films released in 1933 alone with 1934 following in kind. When King Kong was released in 1933, the eyes of the world were on Fay Wray. She’d continue to work steadily at Paramount and freelance after that. While Wray longed for meaty, intelligent roles, she was always in demand and, although she is best remembered for her roles in horror movies, she received great notices in comedies and dramas. I was lucky to attend last year’s Capitolfest where Fay was the featured star. I was enthralled by her in films I’d never seen, in genres I never knew she’d mastered. And mastered she did as a working actress with exceptional beauty of whom no one seemed to ever utter a negative word. I’m glad I’ve gotten to know her work better these last few years. The Most Dangerous Game is a step toward knowing all of it.

This is one of my entries for Fay Wray and Robert Riskin, The Blogathon, which was created to celebrate the release of Fay Wray and Robert Riskin: A Hollywood Memoir on February 26, 2019. The book is written by their daughter, Victoria Riskin. I’ve read it and can tell you it is a fantastic read. I am also thrilled to be co-hosting this blogathon with friend Annmarie at Classic Movie Hub. Be sure to visit both our blogs on March 2 and 3 for fabulous entries honoring two extraordinary careers. 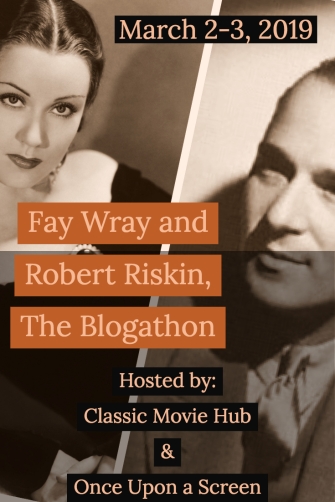 Follow Once upon a screen… on WordPress.com
Join 61,838 other followers

Vivien Leigh by Cecil Beaton, portrait for British Vogue, 1946.
Joel McCrea and Frances Dee consult Santa Claus in a local shop, as they prepare Santa's bag, to be delivered at the McCrea Homestead at Christmas time for their young son. (1934)
Loading Comments...
%d bloggers like this: