Best known for such memorable musicals as On the Town (1949), Singing’ In the Rain (1952), It’s Always Fair Weather (1955), and The Pajama Game (1957) director/producer Stanley Donen delivers a special treat that falls well outside the music box with the terrific romantic comedy/thriller, Charade (1963).

Regina “Reggie” Lampert (Audrey Hepburn) wants a divorce.  Or so she tells a friend while on a skiing vacation in Haute-Savoie, France.  That same day Reggie meets Peter Joshua (Cary Grant), a hot…er, I mean, charming stranger who would turn out to play a major role in her life in the days to come.

Upon her return to her apartment in Paris Reggie finds the place has been emptied of all possessions and police inspector Edouard Grandpierre (Jacques Marin) notifies her that her husband Charles has been murdered while trying to leave Paris.  At the police station the inspector gives Reggie the possessions found in her husband’s travel bag, which include a letter addressed to her and several passports with Charles’ aliases.  As if all of that weren’t shocking enough the viewing of Charles’ body is attended by three odd men who walk up to the body – one by one – to verify Charles is indeed dead by either placing a mirror under the dead man’s nose or sticking him with a pin.  Reggie sits dumbfounded at all that is transpiring.  And yet the meat of the action hasn’t even started by this point.

Reggie is next summoned to a meeting by CIA administrator Hamilton Bartholomew (Walter Matthau), at the U.S. Embassy.   Bartholomew explains to her that the three men from the viewing served with Charles in WWII and were in cahoots with him and a fifth man in a plot to steal $250,000 they were supposed to deliver to the French resistance.  It turns out the three, Tex Panthollow (James Coburn), Herman Scobie (George Kennedy), and Leopold W. Gideon (Ned Glass) are after the loot that was hidden by Charles when he double-crossed them and stole the money for himself.  Now that Charles is dead the three men are convinced that he must have left the money to Reggie.  Or at least that she knows where it is.  Meanwhile, as Bartholomew explains, the U.S. government is also interested in getting the money back hence her meeting at the Embassy.  Reggie, however, is only convinced of one thing – she didn’t know the man she was married to at all.   And when things really start to heat up as everyone who is after the money is after her Reggie turns to the least suspicious character for assistance – handsome stranger, Peter Joshua.

I’ve recounted the basics of the plot of Charade, but as far as the action goes my explanation barely skims the surface.  The twists and turns don’t let up in this stylish, fast-moving cat-and-mouse thriller with recognizable Hitchcockian themes, which are numerous from the first shot in the movie, which features two of the Master’s favorites – a train and a dead body.  Yet this is not a copy of a Hitchcock movie by any means although many refer to Charade as the Hitchcock movie that Hitchcock never made.   Donen does a fantastic job with this managing an engaging combination of thirties screwball with the sophisticated twists and turns of a top-notch mystery.  Charade stands on its own merits as one of the great movies of the 1960s and that is in large part due to the pairing of mega-talents Cary Grant and Audrey Hepburn who are wonderful together, perfect interpreters of Peter Stone’s screenplay/story.

Charade is Peter Stone’s first screenplay and it’s top notch.  As mentioned it presents an entertaining story with equal parts adventure, thrills, romance and comedy with crisp dialogue throughout all suited for its stars who were also prone to ad-lib now and again.  I imagine one of my favorite lines in the movie is ad-libbed – when Reggie asks Peter how he shaves “there” as she touches the cleft in his chin.  Jaysus!  But anyway…wait, I need a moment…it’s worth noting that screenwriter Stone also has a cameo in the picture as a young man in the Embassy elevator telling the story about a poker game to another man.  His voice is not heard, however, because for some reason it was dubbed with the voice of director Stanley Donen.

Back to Cary and Audrey – their chemistry is superior and the movie oozes class!  The two who had never met before this project got along famously with Grant saying after the filming concluded, “All I want for Christmas is to make another movie with Audrey Hepburn.”

Sadly an on-screen reunion for Grant and Hepburn wasn’t to be and indeed we’re lucky we got at least this one because Cary had serious reservations about the role due to the age difference between him and Hepburn (she was 32 and he almost 60) and initially declined the role.  Stanley Donen, however, was determined as he had Grant and Hepburn in mind as a pair from the get-go having worked with each on separate projects previously.  He’d directed Audrey in Funny Face in 1957 and Cary in Indiscreet in 1958 and The Grass is Greener in 1960.  The two mega-stars together was such an attractive idea, in fact, that when Grant first declined to do the film Universal-International refused the project altogether even after Warren Beatty and Natalie Wood were suggested as the back-up pair.  Luckily, after Grant decided not to do a pending project with Howard Hawks and after the Charade script was reworked by Stone in order to focus on Hepburn as the romantic pursuer Grant changed his mind.  Cary Grant’s concern was that he’d come across as a dirty old man running after a much younger woman.  I really can’t see that happening, but all agreed the switch in the pursuer role worked quite well in the movie and the two stars are perfectly matched in talent, style, charm and looks.  And…everything else that makes a movie star.  As great as Grant looks in Charade it’s hard to believe he thought himself too old or to understand why he only made two more movies after this one. 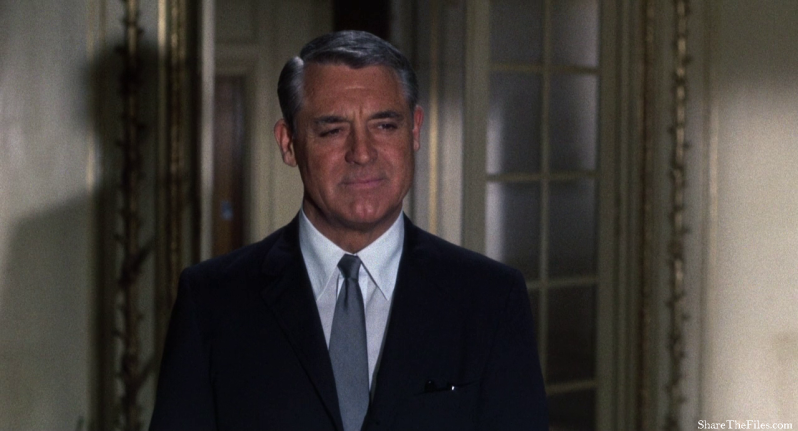 By the way there are no slouches in the Charade cast.  Coburn, Kennedy and Glass are terrific suspicious types with Matthau adding his signature, memorable, not-so-subtle comedy to one of the characters who turns out not to be who he says he is.  For the complete cast and crew list go here.

Audiences saw Charade in droves upon its release in November 1963 making it the fifth most profitable movie of the year.  Eventually the movie also broke the box office records at Radio City Music Hall in New York.  Critical response to Charade was mostly positive, along the lines of Pauline Kael of The New Yorker who called it “probably the best American film” of the year and Newsweek which proclaimed it “an absolute delight.” The only major critic who seemed to have a problem with Charade was Bosley Crowther of the New York Times whose review centered on the movie’s “gruesome violence” referring to the relatively high number of dead bodies that turn up throughout the story.  If you’ve yet to see the film know that these are mild by today’s standard.  And as Donen argued to Universal who also had a bit of the problem with the violence, necessary.

Despite the overall positive reviews Charade didn’t fare well at awards time receiving only one Oscar nomination for Best Music, Original Song for Henry Mancini (music) and Johnny Mercer‘s (lyrics) theme song, which is great.  Also memorable is the movie’s title sequence designed by the legendary Maurice Binder with animation by Robert Ellis.  You’re sure to recognize Binder’s work in this as it’s not far removed from his work on 14 James Bond films including the first, Dr. No in 1962.  I’d be remiss to not give a shout out to the Criterion release of Charade, which I watched prior to this write-up.  As is the case with all Criterion releases that I’ve had the pleasure to watch the movie looks fantastic – and this is a movie so visually rich that it deserves the best possible treatment.  The commentary by Donen and Stone on the disc is enjoyable and includes lots of behind-the-scenes anecdotes to keep fans entertained.

Now that all the major points in Charade have been discussed I come to what brings it all together, in essence and fact the third lead in the movie – the city of Paris.

Stanley Donen mentions in the commentary track that he intended to present a travelogue of Paris as part of the film’s background and he succeeds in doing so.  Charade was filmed in Paris during October of 1962 and although it’s mentioned that it was extremely cold during some scenes the spectacular colors scream autumn and compliment the beautiful Givenchy outfits worn by Ms. Hepburn in particular to perfection.  Believe me, if I notice then it must be extremely well done.

Some sets were used as interiors in the movie, but as much of the real Paris is shown throughout the film as possible captured beautifully by cinematographer Charles Lang.  Lang allows the City a palpable presence as we are taken through such landmarks as Les Halles, Notre Dame, the Champ Elysees, and the Palais Royale.

Donen also mentions how they made it a point to use popular Parisienne elements throughout the film.  Examples of this are such things as the Punch and Judy-type marionette show, Vrai Guignolet at the Jardin des Champs Élysées…

…and comedian Monte Landis who makes an appearance as the M.C. of the Les Black Sheep Club.  According to Donen Landis was all the rave in Paris.  In addition to ensuring the local flavor was infused into the story the sites of Paris are also used to enhance the mood as in the case of the romance brewing between Reggie and Peter and to heighten the suspense as is done for the terrific chase scenes and/or the final showdown at the colonnade in the Jardin du Palais Royal.  Perhaps most impressive is how Paris is used as a direct plot device in the story.  This is best illustrated by (minor spoiler) how and where the $250,000 is hidden in plain sight at a market, which I believe is near Rue Censier and Rue Monge and at avenue Matignon at rue de Ponthieu where we also see Reggie earlier in the picture having the popular French Onion Soup Au Gratin that Donen mentions was a must for high society types at the time.  Since I’ve never been to Paris I may have some or all of these street names wrong so don’t set your French GPSs to my directions!

Anyway – the result of all of that is a movie full of rich visuals that go well beyond the people in the story, which is quite a feat given the beauty and presence of the film’s two stars.  To echo the words of the Look magazine reviewer in 1963 – “Grant, Hepburn and Paris never looked better.”

I am a bit late to the party, but I refuse to yell “ONCLE.”  This is my entry to the France on Film Blogathon hosted by Serendipitous Anachronisms.  There’s a lot of great reading to be enjoyed so be sure to visit the host site. 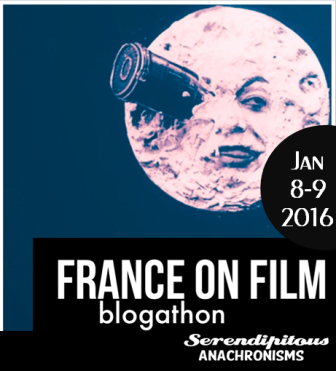