The inhabitants of the fictitious Walton’s Mountain in Jefferson County, Virginia depended on the lumber mill to make a living for generations.  The difficulties presented as The Great Depression tightened its grip forced the mill’s closing, driving many in the area to venture off far and wide in order to survive.  John Walton was one of those men.  Walton found work fifty miles away from Walton’s Mountain taking him away from his family every day of the week except weekends.  As a result, his wife Olivia, their seven children and his elderly parents were left with the difficult task of overcoming the struggles of daily life on their own.

It was on Christmas eve in 1933, a particularly harsh winter night, that the story of the Waltons in The Homecoming: A Christmas Story unfolds.  Christmas celebrations and preparations are on everyone’s mind.  Children await Santa with the hope that toys and instruments will greet them from under the tree the next morning.  Adults hope to be able to feed their families.

As the Walton family awaits John’s homecoming, news of a bus accident reaches them.  One man has been killed and several others injured.  Because news in those days was slow and lacked detail – delivered either by way of radio and/or word of mouth – Olivia, the matriarch of the family, decides they must do something to try to get the father home.  The hope is that John Walton is not either the reported deceased or one of the injured.  While Olivia stays behind with the younger children she sends eldest son, John Boy out to look for his father, a difficult task for anyone in those days and in that place.

Without divulging all the details of the story, it’s safe to say that through John Boy’s journey as he attempts to find his father, we meet several interesting/colorful characters. John Boy faces one obstacle after another – both literal and otherwise – that serve as life lessons for him. For us these serve to transport us to a world few are familiar with.

The Homecoming: A Christmas Story is a 1971 made-for-TV movie, directed by Fielder Cook based on the novel by Earl Hamner, Jr., which was inspired by the author’s own upbringing in rural Virginia.  Hamner himself serves as

narrator both in The Homecoming and in the popular, long-running series that followed, The Waltons.  The stories in both are told by way of the memories of a middle-aged John-Boy, a character based on Hamner himself.

The Homecoming is one of my favorite movies to watch during this time of year, one that never fails to move me as it serves as a reminder of what the most important things in life are – love, family and the warmth that comes from each of those.  It’s worth noting Earl Hamner’s work was also adapted for the screen in 1963 with Delmer Daves’, Spencer’s Mountain starring Henry Fonda and Maureen O’Hara.  While I love that adaptation as well, I have to admit it is a prettied-up Hollywood version, making The Homecoming the more realistic depiction of what the struggles of the time must have been like.

The 1971 TV film features good performances across the board, with a standout delivered by Patricia Neal who portrays the stoic Olivia with aplomb.  Since the patriarch of the Walton family is not present for most of the film, Olivia serves as both the heart and strict disciplinarian of the family.  Her word is law and everyone, including her in-laws, do as told.  I’m a big fan of Patricia Neal’s work.  She has a truthfulness about her that jumps off the screen.  In this case her entire demeanor conveys the results of the hardships one would have endured during those times.  It’s no wonder she won a Golden Globe for her portrayal of Olivia Walton, Best TV Actress – Drama and was nominated for an Emmy for Outstanding Single Performance by an Actress in a Leading Role for her performance in this film as well.  The scene at the end when she sees her husband arrive home safely is a particularly stunning piece of acting!

Midnight nears and Grandpa has just gone out into the cold night to ring the church bells announcing the arrival of Christmas.  Having heard a strange sound on the roof all the kids are up when suddenly John Walton appears holding a huge burlap sack filled with something.  Jason asks about the sack at which time the family gathers

around the tree to listen to the father tell of how he “ran into” Santa Claus and the reindeer as he approached the house.  Luckily, he was able to grab a bag out of the sleigh before the old, bearded man took off into the night.  Enchanted by the story, the burlap sack is opened and out onto the floor spills a gift for every child.  Just what each of them wanted – an instrument for Jason, a train for Jim-Bob, dresses for the older girls, a doll for Elizabeth – gifts John Walton spent nearly his entire paycheck on.  John Boy, meanwhile, sits by quietly watching his siblings’ joy and the miracle that is his father’s safe return.  He’s so taken with the scene he fails to open his own gift.  His father gently reminds him to do so and when he does he sees it’s a pack of writing tablets, which makes both of us weep.  (Yes, me and him).

You see, throughout the film, in a parallel story, if you will, we see John Boy sneak up to his room to write his thoughts down in a tablet he keeps from the rest of the family.  He is ashamed to admit he wants to be a writer fearing it is not important or valuable enough a profession given the difficult times.  By giving him the gift of the tablets, his father gives him the greatest gift of all – acceptance of his dream and respect for his passion.  “I don’t know about the writin’ trade, son.  But if you want to take it up you gotta give it your best.”

John Boy [Narrator]: Christmas is the season where he give tokens of love. In that house we received not tokens but love itself. I became the writer I promised my father I would be and my destiny lead me far from Walton’s Mountain. My mother lives there still. Alone now for we lost my father in 1969. My brothers and sisters, grown with children of their own, live not far away. We are still a close family and see each other when we can. And like Miss Maime Baldwin’s fourth cousins, we’re apt to sample the recipe and then gather around the piano and hug each other while we sing the old songs. For no matter the time or distance, we are united in the memory of that Christmas eve. More than 30 years and 3,000 miles away, I can still hear those sweet voices.

The Homecoming: A Christmas Story should be on everyone’s must-see list for Christmas. There is much more to celebrate about it than I’ve mentioned above, several more memorable scenes to warm you through the night.  Throw in the nostalgia we love, a great story and again, Patricia Neal and you’ll have yourself a merry little Christmas. 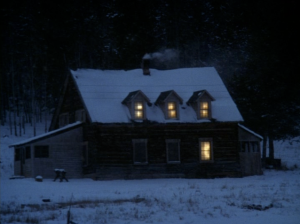 Stanley Kubrick’s DR. STRANGELOVE OR: HOW I LEARNED TO STOP WORRYING AND LOVE THE BOMB opened on January 29, 1964. #OnThisDay
William Holden takes a Coca-Cola break on set of Michael Curtiz’s FORCE OF ARMS (1951). #DailyHolden
Loading Comments...
%d bloggers like this: