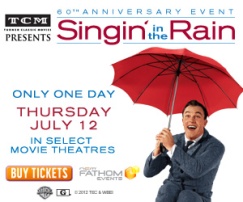 I spent the entire night “Doo-dloo-doo ing.”  It’s not a complaint, mind you, it’s pure joy as I am one of the lucky who saw the MGM classic, Singin’ in the Rain on the big screen last night thanks to Turner Classic Movies and Fathom Events who sponsored the special screening, shown in theaters throughout the country, in celebration of the film’s 60th anniversary.  My excitement’s still palpable today so let’s see if I can get it together to publish a coherent post.

How does one attempt to describe this?  Singin’ in the Rainis not only one of the best musicals ever made and an incredibly funny movie, but also gorgeous in image, in talent, in style. Entertainment Weekly voted this film the 10th Greatest of all time, making it the highest ranked musical.  The 2007 American Film institute list of greatest films of All Time lists it at #5.  From an audience’s perspective these rankings mean little except to emphasize there’s no dispute here, this is a great movie!

Singin’ in the Rain cost MGM about $2,540,800, more than half of which went to Walter Plunkett’s costumes.  And they are

gorgeous to look at.  The MGM heads got over the film going over budget quickly as it was hugely successful, making over $7.7-
million profit upon its initial release.

The script for the Stanley Donen / Gene Kelly-directed, Singin’ in the Rain (1952) was written by Adolph Green and Betty Comden to accommodate the songs already completed, most of which the directors reused from earlier musicals. Interestingly, this film was the sixth time the song “Singin’ in the Rain” was used on the big screen. It was introduced in The Hollywood Revue of 1929 when it was sung by the MGM roster in front of a Noah’s Ark backdrop. A clip from that footage was later used in Babes in Arms. Jimmy Durante sang it briefly in Speak Easily. Durante was the first to add the often used “Doo Doo Doo Doo ” and “Ya Da Da Da”. Judy Garland sang it in Little Nellie Kelly. The song was also featured as an elaborate musical sequence performed by William Bendix and cast in The Babe Ruth Story.  (IMDB)  It’s common knowledge that “recycling” of material, props, scenery, what-have-you was the regular practice during the studio years in Hollywood and anyone familiar with classic musicals would recognize the songs in Singin’ in the Rain from earlier films.  But they are still magical here, perfectly woven together to support a great story. So, I step into a multiplex to watch what is considered one of the best films ever made.  Certainly a gem of a musical from the studio who perfected the genre during the golden age.  Only two people are in the particular theater when I arrive.  Nonetheless, I secure my seat, what I refer to as the “geek seat”  exactly center toward the front.

As showtime nears people start filing in – to my joy as it’s great to see these old films appreciated.  Some older folks, many families with young children.  Lights dim and the familiar introduction to Turner Classic Movies begins to play.   I am where I’m supposed to be.

Prior to the film there’s an introduction by TCM host, Robert Osborne, an enjoyable interview he did with Debbie Reynolds at this year’s TCM Film Fest and some other commentary on the film by Cyd Charisse, Gene Kelly’s wife, Patricia and Donald O’Connor.  All great although my favorite story was when O’Connor recanted his worries about how he and Gene “turned” after a long day of rehearsal.  He spent a sleepless night wondering if they’d be able to syncronize turns as well as they had all other moves.  The next morning Gene approached him first thing.  It seems he too was worried.  Well, turns out they both naturally turned left – a perfect partnership.

These introductions add some of the “Special” to these special theater events.  I’ll add that as a fan of Turner Classic Movies, a channel that’s almost constantly on my television, I feel as if these “events” are specifically for me. There’s an indescribable, perhaps misguided, sense of ownership. I’m there to heed the call, do my duty in hopes these wondrous screenings never cease. 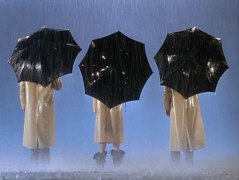 I hadn’t seen Singin’ In the Rain in years and never on a big screen.  I admit, of the huge repertoire of gorgeous MGM musicals to choose from, this one has never been my favorite, but it does have a few of my favorite moments, pieces of delight.  Among them the “Moses supposes” number between Gene Kelly and Donald O’Connor and the Vaudeville routine at the beginning of the film, also between these two astounding talents.  I might as well mention they make magic together, in case anyone who sees this movies doesn’t notice.

I’d forgotten what a funny movie this is, which brings me to the standout, the one who makes this film most memorable for me, Jean Hagen.  Her performance as Lina Lamont is priceless.  Hagen was nominated for a Best Supporting Actress Academy Award for this role and she should have won!  Just wonderful.  I literally cried with her attempts to learn proper speech, given Lina’s been hugely popular in silent films and must try to venture forth into talkies.  I’d read that Judy Holiday was the first choice to play Lina Lamont.  I love Judy Holiday and I think she’d been great in this role.  But Hagen is unforgettable and she had ’em in stitches last night in a 60-year-old classic.  What’s good is good – forever!

Debbie Reynolds is cute and charming as the talented ingenue, Kathy Seldon, the one who wins Don Lockwood’s heart.  Reynolds matches steps with the uber-talented Kelly and O’Connor, which is a feat. 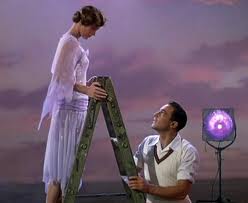 All that makes an MGM musical great is present in Singin’ in the Rain – glorious costumes, those colors!  The music, THE DANCING!   Not a peep was heard from the audience last night where not a peep was warranted.  They were ON, laughing at all the right moments, no commentary, just appreciation for this film.  “What a glorious feeling, I’m happy again.”  And decent applause after each dance number, the most robust after Donald O’Connor’s great, “Make ‘Em Laugh” routine and of course, the iconic, “Singin’ in the Rain” number.  After one of the film’s many funny moments, when Lina Lamont is knocked over as the microphone wire that is hidden in her dress is pulled, a young child’s voice rang out “that’s too funny.”  It warmed this movie-lovin’ geek’s heart.

The film ends and again, applause.  Then the lights don’t come on.  I can hear scrambling and whispers.  Someone asks, quite politely, “are you turning on the lights?”  BEHOLD, there is joy in the air.  It’s impossible not to be UP after this film.  The lights come on after a few minutes and everyone’s smiling – could be the strangest thing I’ve seen in years.

I had a glorious evening, reminded again (by a classic) about the magic of the movies.  This Singin’ Swingin’ Glorious Feelin’ Technicolor Musical is a joy in huge Technicolor, the way it was intended.

“The sun’s in my heart
And I’m ready for love
Let the stormy clouds chase
Everyone from the place
Come on with the rain
I’ve a smile on my face
I walk down the lane
With a happy refrain
Just singin’,
Singin’ in the rain”

As I read tweets this morning, other classic film fans sharing their experience of last night’s event, I come across this wonderful entry by Joel, known to so many of us as @Joelrwilliams1, classic film fan extraordinaire – I couldn’t possibly sum up what these films mean to us any better:

“As we are leaving theater last night, I noticed a blind guy in the back row. THAT is the power of these movies.”

What more is there to say – thank you TCM and Fathom Events!

Sterling Hayden and Madeleine Carroll, married from 1942 to 1946
Herbert Marshall cradles Edna Best on his knee while she chats on the telephone in a production of 'There's Always Juliet' at the Apollo Theatre c. 1930
Loading Comments...
%d bloggers like this: