There is a movie celebration of sorts planned for today.  TCM staffers will take to social media to share the joy of the movies with friends and family and is encouraging all of us to do the same with #LetsMovie, the campaign the network launched earlier this month .  To commemorate the event The Nitrate Diva is hosting the TCM Discoveries Blogathon where bloggers can share their stories about the movies they’ve found or the friends they’ve made through TCM.  This is my entry.

Like so many others I’ve been watching TCM since it launched in April 1994.  As such I couldn’t possibly name all of the movies the network has introduced me to.  They are legion.  So I am commemorating #LetsMovie and the TCM Discoveries Blogathon with a shout out to Byron Haskin‘s Too Late for Tears (1949), the terrific film noir I was introduced to at this year’s Turner Classic Movies Film Festival (TCMFF).  Lucky for me The Nitrate Diva created a banner that fit my choice perfectly.

Too Late for Tears opened TCMFF 2015 for a theater-full of fans as far as movie screenings go.  I was one of them.  A tough choice from the get-go Tears was pitted against Rouben Mamoulian’s Queen Christina (1933) at a nearby theater.  Yes, I gave up watching a royal Garbo on the big screen for a down-n-dirty Lizabeth Scott playing the femme fatale to end all femmes fatale.  Literally.  Scott’s Jane Palmer would finish off the coldest femme you can think of for the price of a silver dollar.  And as an interpreter of all that is a femme fatale you get no better than Lizabeth Scott.  She was a natural who never gave the impression she’s was trying too hard.  Aptly nicknamed “Tiger” by her main co-conspirator/nemesis in Too Late for Tears, Jane Palmer is a woman born to eat people alive.  As she openly admits keeping up with the Joneses was an obsession, one worth murdering for.

“I didn’t know they made ’em as beautiful as you are, and as smart. Or as hard.”

Too Late for Tears is standard film noir fare as far as its story goes, only more so.  A beautiful, hard, scheming woman happens across $60,000 when a bag full of money is tossed in her convertible by mistake.  That’s a once-in-a-lifetime get-rich opportunity Jane will do anything to protect.  The “anything” in this case includes lying, manipulating and destroying the men who get in her way – her husband Alan Palmer (Arthur Kennedy) who wants nothing to do with the loot and the crooked Danny Fuller (Dan Duryea) who’s after the money he thinks should be his.  The ensuing plot of Too Late For Tears includes plenty of double-crosses, dead bodies, an intriguing pursuit by the suspecting Don Blake (Don DeFore), a fantastic ending and some of the best noir dialogue you’ll ever hear.   Although Miss Scott’s portrayal is the real story here, both Duryea and DeFore are terrific in the movie, playing against the femme’s delicious husky-voiced duplicitousness to perfection.  Also in a key role in the movie is Kristine Miller who plays Jane’s sister-in-law Kathy Palmer.  Kathy is instrumental in unraveling the web of murderous deceit.

The behind-the-scenes story of how Too Late for Tears came to be screened at TCMFF in its newly restored glory is as interesting as the one depicted in the movie.  As is (sadly) the case for many low-budget, genre films Tears was given little attention and made little money in its initial 1949 release.  A reissue version was released in 1955 under the title “Killer Bait” that again served little purpose other than to fill a marquee for a little while.  In subsequent years Tears was relegated to the public domain where anyone could – and did – manage to mangle it and distribute poorly edited, sub-par copies.  Caught in that void the original 35mm prints of the movie were thought lost for years.  As Eddie Muller explained during the TCMFF introduction of the movie as well as during his TCM introduction when Too Late for Tears aired as part of the network’s Summer of Dark festival, an original print of the movie was found in France, which led to the revival.

Muller’s Film Noir Foundation placed Too Late for Tears at the top of its restoration efforts and as a result was able to breath new life into the noir gem thanks to the work of the UCLA Film and Television Archive, an effort that took five years.   The re-release of the newly restored film made its official debut at the 2014 Noir City Film Festival and thankfully made its way to TCMFF.  The Too Late for Tears saga serves as a reminder of the importance of supporting film restoration as this is a prime example of all we have to lose. 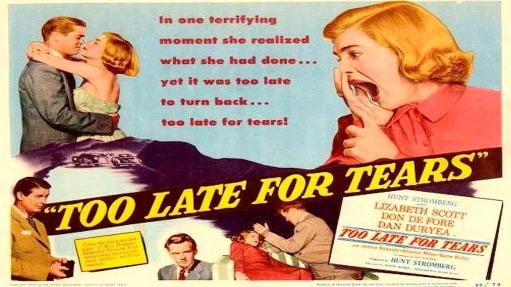 During his introduction of Tears at TCMFF Eddie Muller also mentioned that Lizabeth Scott didn’t like the movie and he could never get her to introduce it at any event.  I imagine everyone who sat in the Cineplex that evening thought it was too bad because she’s wonderful in it – a heartless Tiger and the supreme femme predator.  I like to think that Scott, who passed away at the age of 92 in February, would’ve enjoyed knowing how much we appreciate her as a Queen of Noir.

We stepped out after the movie concluded at TCMFF in murderous giddiness with people reciting their favorite line of dialogue.  No doubt we’d made the right choice to kick off TCMFF just as Eddie Muller had said.  That was “the place to be.”

There you have my TCM discovery story.  I wouldn’t have been introduced to Too Late For Tears, the story behind the tireless efforts to bring it back to life or the friends I shared that screening with if not for TCM.  While we as classics fans appreciate the opportunity to watch perennial favorites on a big screen it’s the unknown gems that are most special.  Many thanks for that.  You’re swell!

Now #LetsMovie!  Follow the hashtag on Twitter today and visit The Nitrate Diva to read other TCM discovery stories, Tiger.