It’s been happening for over thirty-five years – a bi-monthly meeting of the Cliffhangers Club made up of nine guys who get together to watch movies.  This is not a gathering at the local movie theater, however.  It’s actually as close to a recreation of what made them fall in love with old movie serials as can be achieved in a house in California.  The atmosphere is warm and inviting if you’re a part of the exclusive group of the Brotherhood of the Popcorn whose story is now told in an enjoyable and heartwarming documentary. 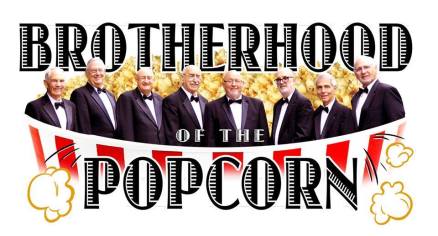 The members of The Brotherhood of the Popcorn aka the Cliffhangers Club come from all walks of life – animators, a protectionist, a musician, a schoolteacher, a truck driver, a newspaper man – all colorful characters whose stories are both funny and stirring.  Actually getting to know a bit about the characters is as enjoyable as hearing about how they first came together and how they came to love movies.  These guys meet with ritualistic flare, they sit in the same seats in the nine-seat movie theater in the home of Woody Wise, group president, co-writer, executive producer of the project and most importantly movie chooser (a major time-saver) for the group screenings.  Brotherhood of the Popcorn is directed by Inda Reid, award-winning director of The Making of the Nutcracker (2009)

The screening room used by the Brotherhood is a dream particularly for those of us who can easily picture ourselves following this tradition.  But it doesn’t come alive until you see the Cliffhangers preparing for a screening – after brunch, after informal, spur-of-the-moment movie reviews each settles into his own seat with popcorn in hand.  Follow Brotherhood of the Popcorn on Facebook where the bi-weekly screening details are posted.

Woody Wise sent me a review copy of the Brotherhood of the Popcorn a while back (THANK YOU!) and although I watched it soon after receiving it time and other commitments kept me from putting a few words together on the film.  Since then I’ve rewatched it and enjoyed it even more the second time.  Except that now I need more than a few words to explain why this movie touched me so.

“We lived through the best of times.”

To start Brotherhood of the Popcorn features plenty of nostalgia that’s right up your alley if you happen to be a classic movie fan.  Classic clips abound and reminiscences of days gone are enough to keep you entertained.  But it’s the stories of the Brotherhood members that make this film a must-see.  The memories and the life-long friendships they’ve made have gotten them through difficult times and the Cliffhanger meetings are a highlight they look forward to without loss of enthusiasm for over thirty-five years running.

Try to explain to non movie fans about friendships forged by way of movies and at best they think you’ve just run into other oddballs. It’s difficult to put into words how movies evoke memories, how they ignite heated debate and how they offer endless hours of entertainment. Brotherhood manages to get to the core of what movies mean to so many of us by way of this group of gentlemen who share their stories.

Brotherhood of the Popcorn is making its way through the festival circuit and will next be screened in Los Angeles at the Burbank International Film Festival on September 13 at 2:00pm as an official selection.  Get your tickets now at the Brotherhood of the Popcorn official site where you can also take a look at the new trailer.  Seating for the Burbank screening is limited so act fast.  I assure you’ll enjoy the 90-or-so minutes immensely.

I’ll end with this – having made it out to California three years in a row for the Turner Classic Movies Film Festival I’ve been able to knock off a few “must-see” sites with many more to go.  Added to my wish list now is watching a movie with the Cliffhangers!