Well…she was a novelist, penned a frank autobiography and a best-selling memoir, had several failed marriages, suffered from alcoholism, attempted suicide, survived one of the worst divorce scandals of the 1930s and among many other things, was an Academy Award winning actress with a five decades long career.  She is also slated for a month-long tribute on Turner Classic Movies (TCM) as the network’s Star of the Month for March. 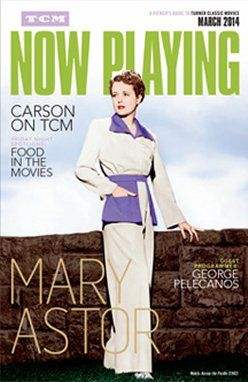 As part of the month-long tribute, TCM will spotlight Mary Astor films every Wednesday bringing us forty-eight of her films in total, as well as many details of her interesting life as the month progresses.  Edmund Goulding’s The Great Lie, the film that features Astor’s only Oscar-winning performance (Best Supporting Actress) will kick off the festival.

As intriguing as Mary Astor’s life was I’ve always been fascinated by her extraordinary talent. Hers was a range few other actors could boast delivering performances that evoke lasting images ranging from heart-warming matriarchs to the most duplicitous of murdering dames.  In short, Astor was a wonder, a beauty and a survivor.  On and off-screen. It’s with excitement and curiosity that I look forward to the TCM tribute during which several films I’ve never seen will be shown.  Be sure to tune in and to set your DVRs.  Go to TCM for the complete the schedule. In the meantime, here’s my mini-tribute:

And, what actually prompted me to post this humble tribute, Mary Astor on the radio:

For more on Astor:

Visit The Self-Styled Siren’s “You Don’t Wanna Know About How Frank She Was:” A Conversation with Marylyn Roh About Her Mother, Mary Astor