When you re-watch your favorite films, what keeps you coming back for more? A great
story with sharp writing? No doubt. Beautiful costumes, swanky set designs, and
stunning cinematography? Most assuredly. But the performances are key to any movie.
While we all look forward to the popular leading actors, it is the stand-out, scene-stealing
supporting actors that feel like “home.” Like this gent…

I am thrilled to join forces once again with Paula of Paula’s Cinema Club/ @Paula_Guthat and Kellee of Outspoken & Freckled/ @IrishJayhawk66 to bring this event to life. Visit my co-hosts often at their blogs or follow on social media as we share the love for these all-too-often forgotten talents. If it’s not obvious you can find me on this blog and at @CitizenScreen on Twitter and Facebook. Of course we hope you join us for the WHAT A CHARACTER! BLOGATHON 2018, on December 14, 15, and 16 with a tribute of your own.

You should know the drill by now, but if you don’t here are guidelines you should follow:

Participating blogs and choice of actors

A Person in the Dark – Boris and Natasha

It Came from the Man Cave! – Bruce Campbell

The Last Drive In – Eileen Heckart and Louise Latham

Married at the Movies – Patsy Kelly

dudsism – The career of George Kennedy

In the Good Old Days of Classic Hollywood – Agnes Moorehead

A Shroud of Thoughts – Thelma Ritter

Silver Screenings – Everett Sloane in The Lady from Shanghai 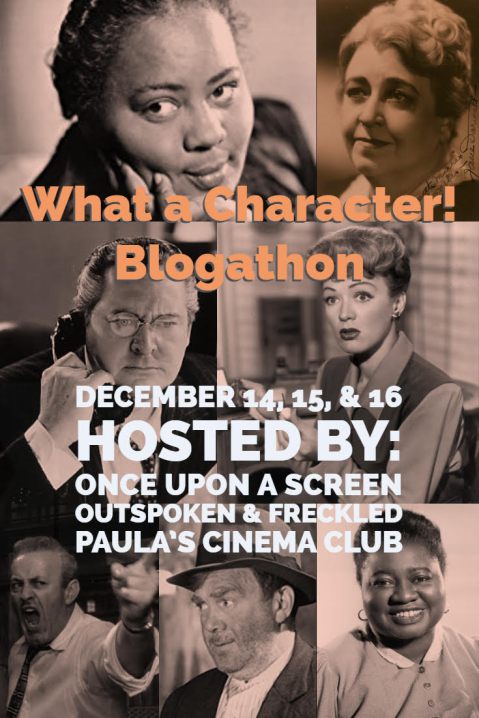 Special dedication: This WHAT A CHARACTER! BLOGATHON is dedicated to the memory of two fine character actors whom we lost this year. The first is James Karen (1923 – 2018), a hard-working actor with a long career whose personality graced all who met him. The second is Vanessa Marquez (1968 – 2018), a talented actress of film and TV and an even better friend. Vanessa is greatly missed and we continue to hold her close in our hearts. With each entry we’ll think of her.

Thank you to TCM for the WHAT A CHARACTER! tagline inspiration and to all bloggers and film fans for your ongoing participation and support for seven years running! Finally, a big shout out to
my co-hosts who inspire me all year long for being such marvelous and lovely characters themselves!

From 2013, Robert Osborne and @cher at #TCM for Friday Night Spotlight “A Woman’s World: The Defining Era of Women in Film”
I’ve shared this before, but popped up on my phone again now.
Loading Comments...
Comment
×
%d bloggers like this: