James Whale‘s pre-code comedy-horror movie The Old Dark House opened in theaters across the U.S. 86 years ago today, on October 20, 1932. Last night I had the pleasure of watching it on a big screen at the Landmark Jersey Loew’s as part of a double feature tribute to Boris Karloff. The first feature of the evening was Whale’s Bride of Frankenstein, which didn’t disappoint. It remains one of the greatest films ever made, a movie that transcends the genre. Since I’ve already discussed watching Bride of Frankenstein on a big screen, however, I’m dedicating this post to The Old Dark House, a gloriously entertaining outing featuring a stellar ensemble cast. 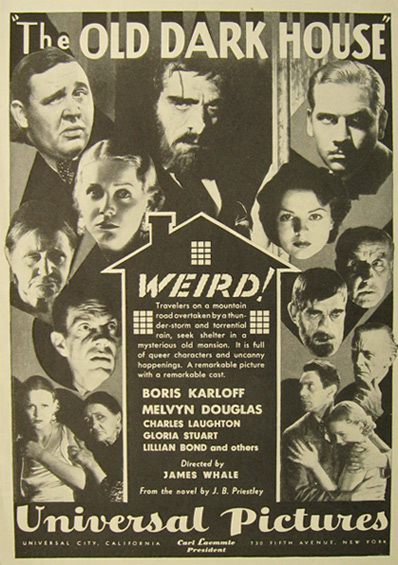 The Old Dark House is the second and least successful of the four horror films James Whale directed at Universal. This film followed the huge success of Frankenstein in 1931 and is succeeded by The Invisible Man in 1933 and Bride of Frankenstein in 1935. Dark House is based on the 1927 novel Benighted by J. B. Priestley and was adapted for the screen by R. C. Sherriff and Benn Levy. Despite its less than enthusiastic welcoming by 1932 audiences, The Old Dark House is creepy enough to satisfy horror fans while offering lots of laughs for those who scare easily. Like me.

Thought lost for decades, The Old Dark House is worth a look for many reasons not the least of which are the kooky characters played to perfection in the style of the stage. That’s what I kept thinking about as I watched the supremely talented cast go about their duties across a main room where much of the action takes place. Also notable is the film’s historic importance as it is the first film in which Boris Karloff receives top billing and the first American film for Charles Laughton. I don’t think anyone would argue the place both of those actors inhabit in the history of film. Further, The Old Dark House is the only film featuring both Karloff and Raymond Massey, who are otherwise memorably connected by Arsenic and Old Lace. Boris Karloff starred in the stage version of Old Lace, but the producers wouldn’t release him to appear in Frank Capra’s film version with the part then going to Massey who then references Karloff in the movie. Interestingly, there’s a similar feeling to The Old Dark House than there is to Arsenic and Old Lace due to its familial theme and the mayhem that ensues.

The Old Dark House tells the story of a sinister old house owned by disturbing (and disturbed) siblings. Ernest Thesiger entertains with usual flair and adds lots of fun to the proceedings as Horace, a neurotic who likes to offer people potatoes. Eva Moore plays Horace’s sister Rebecca, a hard-of hearing, distrusting odd duck with a fondness for chastity. As much of a fan as I am of several of the actors in The Old Dark House the film belongs to Thesiger and Moore who are so convincing in these roles they make one believe the characters’ oddities are the actors’ as well.

Then there’s Morgan, the mute butler played by Karloff. Morgan is a huge, brute of a man who becomes extremely dangerous when he drinks – and of course he drinks. There’s a particularly interesting sequence during which the three male guests struggle for quite a while to overcome the drunk Morgan after he lunges at Margaret. I love that Whale let the struggle go to the point of uncomfortable, illustrating the super strength of the lumbering butler. It’s noted in several places that Morgan became the inspiration for the Lurch character in The Addams Family TV show. I can see it. 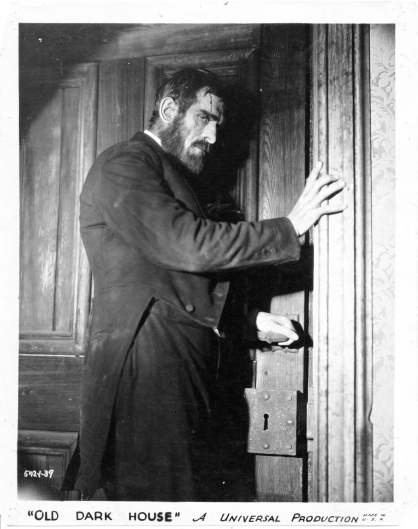 Finally, the last two members of the Femm family are patriarch Sir Roderick Femm (Elspeth Dudgeon) who is confined to his bed and brother Saul (Brember Wills) whose hobbies include arson and murder. To say that the Femm family has issues is a severe understatement.

As the story opens we see Philip Waverton (Raymond Massey), his wife Margaret (Gloria Stuart), and friend Roger Penderel (Melvyn Douglas) trying to drive through a horrendous storm. All three actors are terrific in their roles, but I can’t disguise my special admiration for Douglas who’s as charming in this horror offering as he is in romantic comedies. Douglas adds a bit of the romantic to The Old Dark House and makes for a believable hero in the end. Anyway, Mr. and Mrs. Waverton and Roger Penderel come upon the old dark house and have no choice but to seek refuge in the structure and with its inhabits all of which get loonier and scarier as time passes.

While the Femm siblings and their guests are having dinner Sir William Porterhouse (Charles Laughton) arrives with his girlfriend, Gladys (Lilian Bond). Now all the players are gathered, each bringing a unique characteristic to the table to make for an enjoyable feast of happenings. There really is no misstep in any of the performances in this movie, but I offer another shout out to Charles Laughton whose delivery and physicality stand out for all their Englishness. As I watched I remembered reading that Laughton had said of himself, “I’m a tired, old ham.” Well here he’s a fresh, young ham…and a delight. 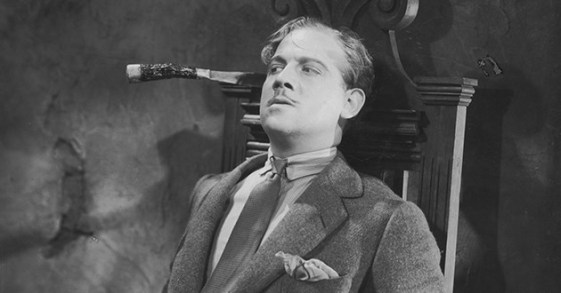 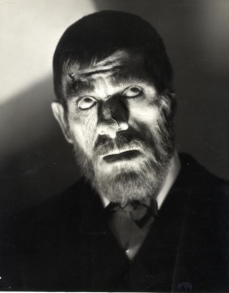 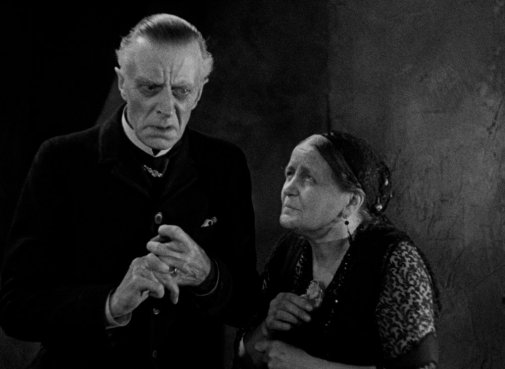 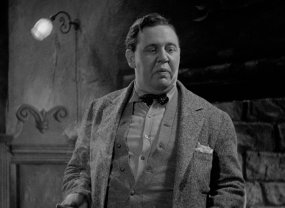 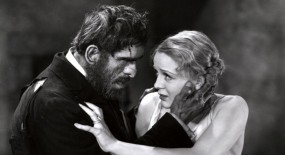 It was a real treat watching The Old Dark House on the big screen last night. Sadly, the crowd wasn’t a large one. Purists may have stayed away because the film was not shown in 35mm, but as I’ve said before, I prefer to watch it than not watch it at all. Sitting next to me was friend and blogger, Jo, the Monster Girl herself, of The Last Drive-In. I consider Jo an expert in the horror genre so watching a Karloff double feature with her was special. I encourage you to visit her blog. Of course, if you haven’t seen The Old Dark House this post is intended to persuade you to do so. That’s particularly true if you’re of the faint of heart variety and can’t think of anything else to watch for Halloween. While horror and psychological thrills abound, The Old Dark House offers respite. In addition to all I’ve already mentioned Dark House also brings you that certain pre-code sensibility that’s always entertaining, plus the sounds and shadows that make classic horror fare memorable in the style of the great James Whale. 86 years after its release The Old Dark House stands strong with witty dialogue and as a precursor to many of the haunted house-isms that followed. 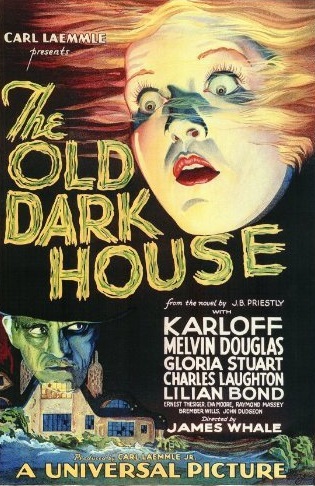