In about a week Mrs. Iselin will suggest – in no uncertain terms – that those under her watch pass the time playing solitaire, which is code for a certain type of activity.  While she is having her will play out to the minutest detail I will be watching from somewhere out there in the dark inside the TCL Chinese Theater on the second day of this year’s TCM Classic Film Festival (TCMFF).  The movie I refer to is (of course) John Frankenheimer’s, The Manchurian Candidate (1962), which is my one, absolute must-see at this year’s TCMFF because in attendance will be Angela Lansbury whose performance as Eleanor Shaw Iselin is unforgettable.  I’ve no doubt the Chinese will be packed that Friday night and by then many difficult movie decisions will have been made, but the first-world problems we complain about will matter little because we’ll be in the midst of an epic weekend.

TCMFF is enjoying its seventh incarnation this year and with passes selling out earlier than ever, it seems to me, this promises to be another memorable turn as thousands of excited fans descend upon Hollywood with memories in tow and ready to forge new friendships.  Since the frenzied day when TCM released the final festival schedule I’ve perused and ruminated over all of the offerings, which include approximately 80 films, a dozen or so Club TCM presentations, several book signings and dozens of special guests.  Among them are Rita Moreno, Carl Reiner, Eva Marie Saint, Faye Dunaway, Elliott Gould, Anna Karina, Adam West and Gina Lollobrigida all in addition to the great Lansbury.

This will be my fourth year attending TCMFF and the schedule is posing some of the most difficult choices I’ve ever had to make.  Just thinking about choosing between Shanghai Express (1932) and Love Me or Leave Me (1955) gives me a headache.  And that’s one of the conflicts I actually did decide on.  In any case, as is the usual practice for many of the bloggers who attend TCMFF I’m posting this as a preamble to my festival experience, a sort of diary to lay out my plans for the weekend.  Unlike previous years, however, I’m able to offer a video of my reviewing the schedule with Annmarie Gatti of Classic Movie Hub.  Along with Rob Medaska, Annmarie is my co-host in our new YouTube show, “Classic Movies and More.”  Take a look at two fans discussing the schedule and you’ll see what I mean by “difficult choices” –

The video illustrates that making these choices doesn’t get any easier when you’ve been to the festival a few times.  I’ve seen comments by people who are attending for the first time this year wherein the angst is apparent.  I’m here to tell you that although one gains some insight as to timing and general dos and don’t the choosing remains difficult.  The best piece of advice I can offer newbies is to be flexible.  If you can’t get into a screening you had your heart set on have a back-up plan and don’t let it spoil your weekend.

Since we taped the show my choices have changed somewhat as has my approach to the schedule.  I’ve decided that in the “impossible to choose slots” I will focus on “new-to-me” films to supplement my absolute “must-sees.”  This personal discovery approach will result in 9 films I’ve never seen and 15 films overall to include a smidgen of Club TCM presentations and other activities.  Following is the schedule I’ve (sort of) settled on with new-to-me films marked with an *.

*One Potato, Two Potato (1964) – The movie, which deals with interracial marriage, sounds interesting on its own, but add a conversation between Barbara Barrie, Donald Bogle and Larry Peerce and this should also be a great learning experience.

*Los Tallos Amargos (1956) – An Argentinian noir that I “think” I watched as a child with my grandmother when it played on TV, but I’m counting it as another new-to-me entry since I remember nothing about it.  This will be introduced by Eddie Muller of The Film Noir Foundation.  I have to add, however, that it’s also tempting to follow One Potato, Two Potato with Guess Who’s Coming to Dinner (1967), which stays on theme and will have Katharine Houghton in attendance along with Donald Bogle.

*6 Hours to Live (1932) – a painful choice even though 6 Hours sounds like it’s right up my alley.  This is up against what will likely be THE screening of the festival, The Passion of Joan of Arc (1928), but I’m still leaning toward 6 Hours to have a better chance of getting in to The Manchurian Candidate.

(Take time to cross all fingers and toes in hopes that Carl Reiner will be interviewed at the Roosevelt lobby following his discussion at the Dead Men Don’t Wear Plaid screening.)

*The Long Goodbye (1973) – The King and I was on my original “Must see” list, but if I get to see Rita Moreno up close and personal during her book signing then I will probably go to see this.  I’ve been on a Raymond Chandler kick lately.  Elliott Gould will be in attendance.  But then – The King and I at the Chinese. Jaysus!

Gog in 3-D (Check out our interview with Bob Furmanek, Founder and CEO of the 3-D Film Archive)

M*A*S*H (1970) – With Elliott Gould in attendance.  Now – based on what I noted for Saturday I would’ve seen Gould at the screening of The Long Goodbye the previous day this choice completely depends on what is slated to fill the TBD spot.  If it’s Love Me or Leave Me that’s where I’ll be without a second thought.

Horse Feathers (1932) – with David Steinberg in attendance. so

She Wore a Yellow Ribbon (1949) – I just cannot pass up a John Ford film on a big screen!  I’m even giving up seeing Eva Marie Saint for this screening.  With Keith Carradine in attendance.

Cinema Paradiso (1988) – I know this is not a movie many people would deem “classic,” but it’s the perfect choice to close a festival which theme is “Moving Pictures.”  I adore this movie about loving the movies and cannot wait to see it at Grauman’s.  In attendance will be Salvatore Cascio who steals your heart with his portrayal of young Toto. 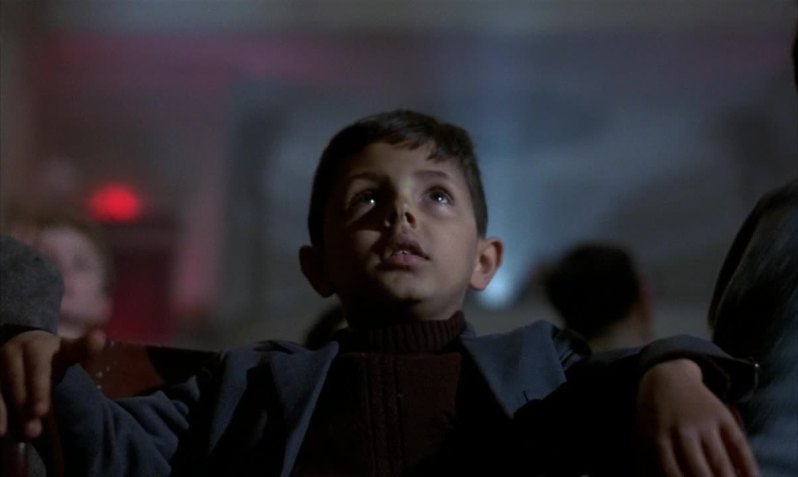 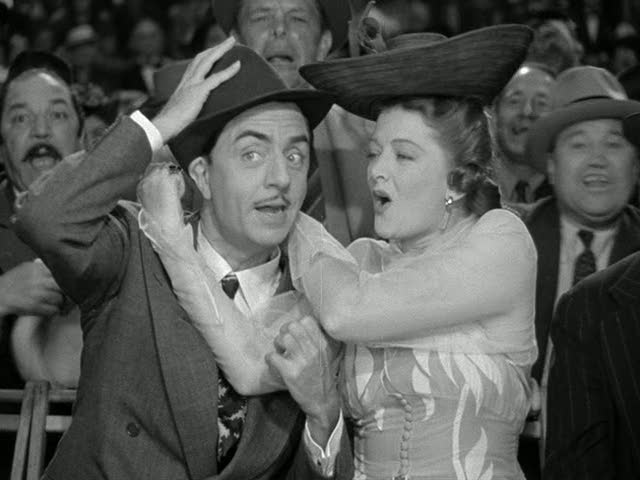 A few other tidbits…

It’s always fun to compare notes with friends so I’m including links to a few other bloggers’ TCMFF picks.  I love reading how everyone makes his/her decisions on such things and hope you do too.  If your blog post is not included leave the link in the comments section and I’ll be happy to add it to this list.

Archive-Type: Musings of a Passionate Preservationist – this is a fantastic resource guide that includes a breakdown to let you know where and when 35mm, DCP and new restorations are playing throughout the four-day event.

If you’ve visited this blog in the past you might remember that I’ve attended the three previous TCM Classic Movie Festivals with media credentials.  This year I’m attending as a Social Producer and I couldn’t be happier I chose to give it a try.  Along with a group of about 20 other classic film lovers, a group that includes journalists and archivists, bloggers and tweeters, Instagrammers and Tumblrers I will be all over the festival sharing content as I experience it.  Annmarie will be posting a “Meet the Social Producers” entry soon and I’ll link to it here so you can get a sense of who we are. 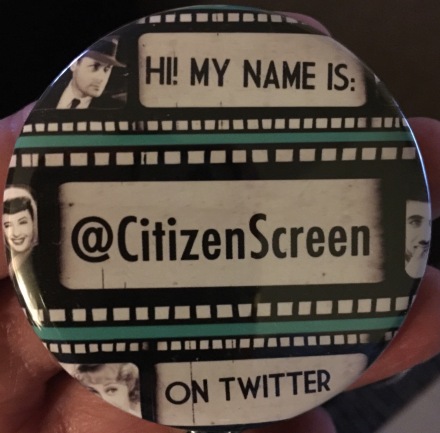 In the meantime know that you can follow the #TCMFF and Social Producer #TCMFFSP tags throughout the festival for the latest news, images, quotes and what have you!  Each Social Producer was assigned a certain role and mine is to be a reporter for a great, metropolitan network.  What that means is that I’ll be reporting from specific events at the festival in this official capacity.  There are lots of great things happening at TCMFF this year and I’ll do my best to bring them to you in a timely manner via…

I hope my excitement comes across in this post.  There’s a lot to do, a lot to say and a lot to see and thanks to TCM and TCMFF a lot of people who I want to share all of this with, like-minded fans who enjoy spending four full days talking old movies and old movie stars.  I may not know exactly what will happen or what I’ll do, but I can say for sure I won’t be passing my time playing solitaire, Mrs. Iselin. 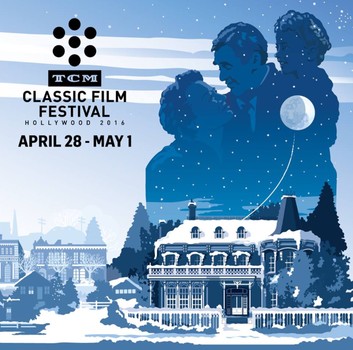