Centered on the swashbuckling lore of piracy on the high seas comes a motion picture that takes your breath away.  From 20th Century Fox Film Corporation, based on Rafael Sabatini’s 1932 novel, it’s Henry King’s The Black Swan starring Tyrone Power and Maureen O’Hara. 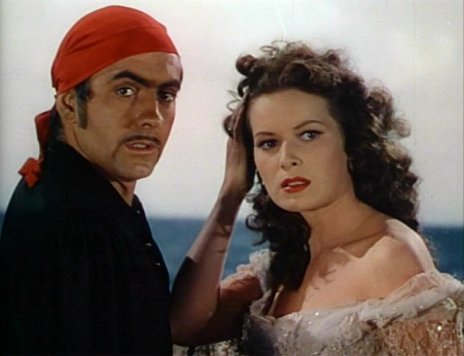 As this adventure opens, Jamie Waring (Tyrone Power) is captured when he and his band of thieves raid a Jamaican town.  Wile being tortured by the villainous Don Miguel (Fortunio Bonanova) Jamie escapes thanks to his friend, Tommy Blue (Thomas Mitchell) and the rest of the pirates in his crew. Don Miguel wanted Jamie to spill details about Captain Henry Morgan (Laird Cregar), a friend of Jamie’s who he believes has been hanged for piracy in England.

The tables now turned with Don Miguel on the rack, in walks the Governor of Jamaica, Lord Denby who informs the intruders that a peace treaty has been signed.  Jamie ignores the news and orders the capture of Denby for the part he played in the hanging of Captain Morgan.

Moments later Jamie is distracted when Denby’s beautiful daughter, Margaret enters demanding an explanation as to the pirate’s actions in Jamaica.  Jamie cares little about her protestations focusing instead on the matter at hand – kissing her, which proves a difficult task.

While Jamie’s energies are focused on Lady Margaret, the presumed dead Captain Morgan enters.  He’s not only been given the king’s pardon, but has been made the new Governor of Jamaica.  Morgan then orders a gathering of the pirates to ensure the peace treaty by way of a deal – if they agree to lay down their arms each will also receive a pardon along with several acres of land.  Failure to follow the guidelines will result in death by hanging.

Present at the Morgan gathering is Captain Billy Leech (an unrecognizable George Sanders) and his second-in-command, Wogan (Anthony Quinn) who refuse to give up the life of piracy or to curb plans to return to their ship, the Black Swan en route to Maracaibo to raid whatever treasures there are for the taking.

Meanwhile, Jamie and his comrades agree to Captain Morgan’s terms.  He remains a pirate at heart, but he’s also now smitten with Margaret Denby who (conveniently) lives in the Governor’s House in Port Royal, where Jamie goes with Morgan to be sworn in as a servant of the King.

Jamie turns his efforts in earnest toward romancing Lady Margaret, but she refuses his efforts preferring her intended, Roger Ingram (Edward Ashley) who unbeknownst to her is conspiring with Captain Billy Leech to raid English treasure ships.  When Morgan learns of Leech’s raid he sends Jamie and Tommy to capture him, but they fail and return to Port Royal with the news, which causes everyone to want to get rid of Morgan as governor because they think he’s in cahoots with the pirates.

Meanwhile Ingram continues to conspire with Leech by giving him information to facilitate the raiding of the English ships.  In return, Leech makes Ingram a rich man.

Jamie is determined to stop Leech and sets out into the high seas, but not before kidnapping Lady Margaret to prevent her from marrying Roger Ingram.  By now Jamie knows of Ingram’s association with Leech and his efforts to try to get rid of Morgan.  When Ingram announces he’s planing to set sail for England immediately to report the news of Morgan’s impeachment, Jamie sees no other option but to take Lady Margaret along in his attempt to try to stop The Black Swan and capture Leech.

Jamie and Tommy and the crew, with Lady Margaret in tow, soon run into the Black Swan and her fleet of evil pirate ships.  Jamie is out-powered and outnumbered so in order to apprehend Leech a plan is put in place – in a hurry – to pretend to join Leech with the pretext of getting his share from the raids.  The plan includes convincing Leech to sail to Maracaibo where Morgan’s ships will be waiting to ambush him.

Meanwhile, the only explanation Jamie can offer as to why Lady Margaret is accompanying him on the expedition is to say they’ve just been married, something the suspicious Leech makes sure to prove by going into their cabin in the middle of the night to see if he two are living as man and wife.  And he sees they are, but as the drunk Leech is about to leave the cabin, he notices the hammock that Jamie was sleeping in before Leech entered the room.

Jamie and Lady Margaret are captured by Leech and a fierce battle ensues – of the swashbuckling kind – that ends with Jamie killing Leech, proving his loyalty to Morgan.

The romance is resolved as well.  Able to resist Jamie’s charms because she despises his pirate ways throughout the entire story, Lady Margaret succumbs to him in the end – as any red-blooded woman would do.  Jamie had promised her that until she agree to call him “Jamie Boy” three times – the name used by his friends – he would not force himself on her.  Well now, there’s no need for force as Lady Margaret walks up to the handsome pirate and seductively calls him by that name – three times.  The film ends with the two in each other’s arms in a passionate kiss.  Jamie Boy, Jamie Boy, Jamie Boy – oh boy!

The Black Swan is as good a pirate/swashbuckling movie as was ever made during the golden age of the movies, in my opinion, and a terrific adventure film period.  I’ll add that Tyrone Power is my favorite swashbuckler thanks to this film and The Mark of Zorro (1940), which I adore.

I watched The Black Swan in preparation for this commentary on the latest bluray release of the film and my lord does it ever look gorgeous!  I really can’t comment about details of restoration, since I’m unfamiliar with those processes, but I can say that it is noticeable the film got a great makeover.  The colors are breathtaking and scenes – whether close-ups or sea battles – are spectacular.  The beauty of both Power and O’Hara deserve nothing less – and they’ve never been more beautiful.

The Black Swan won an Oscar for Best Cinematography, Color for the talents of Leon Shamroy who deserved to get that and more.  The commentary that’s part of the bluray’s extra features discusses the process of 3-strip Technicolor used, which clearly made vibrant color literally jump from the screen as had never been seen before.  In truth, I really don’t care how they did it, just that they did it.  Whether contrived with lighting or color strips or what-have-you the movie fills the senses.  The sets are fantastic, the mood terrific.  This is Technicolor in all its glory.

The Black Swan also received Oscar nods for Best Effects, Special Effects and Best Music, all of which still stand up well not only in the bluray release, but for a 70-plus year old film.

“Working with Ty Power was exciting. In those days, he was the biggest romantic swashbuckler in the world. Murderously handsome! But what I loved most about Ty Power was his wicked sense of humor.”

After the success of Rouben Mamoulian’s The Mark of Zorro in 1940, Fox Production Chief, Daryl F. Zanuck purposefully looked for a swashbuckling follow-up to star Tyrone Power and found what he wanted in Sabatini’s 1932 novel.  Several writers were given the opportunity to write the script, but Zanuck’s vision came to light only when Ben Hecht took hold of the story and made it his own.  The final script has a compelling story with plenty of action to boot.

Tyrone Power was at the height of his popularity in 1942 testament to which is the fact that 20th Century Fox spent well over $1 million dollars to make The Black Swan.  A pretty penny in those days.  This was Power’s 24th film at Fox and he’d risen from a complete unknown to the studio’s top moneymaker.  In fact, no other star at Fox, excepting Will Rogers, brought the returns to the studio that Power did with as much assurance as none of his movies during that time ever lost money.  For his efforts, Fox skimped on nothing Power starred in during the time – The Black Swan being just one example – spending over $31 million on his movies during the height of his popularity.  No other star came close to that budget.

I mentioned above that Tyrone Power is my favorite swashbuckler, but I must add he was a terrific actor all around.  A natural (or naturalistic) actor who played all roles – whether in a taut mystery, such as Wilder’s Witness for the Prosecution, a noir like Goulding’s Nightmare Alley or an over-the-top fantasy/adventure like The Black Swan – believably.  Tyrone was one of the rare talents who possessed the looks of a leading man (and how) and the depth of a character actor.

To Tyrone Power, much more than a pretty face, gone much too soon this post is dedicated.

I post this commentary as part of the Power-Mad blogathon hosted by Lady Eve’s Reel Life and They Don’t Make ‘Em Like They Used To, which will feature commentaries and retrospectives covering Tyrone Power’s life and work in celebration of what would have been his 100th birthday on May 5, 2014.  Be sure to visit the host sites to read about the power of Power, one of the greatest movie stars the silver screen will ever feature. 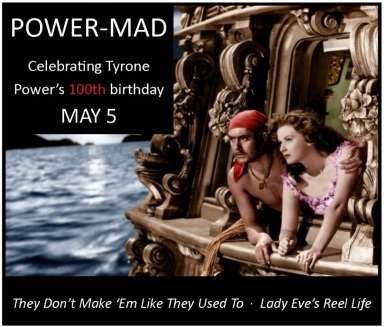 Note an interesting tidbit about the image used in this banner, which was one of the most popular images used to market The Black Swan in its original release  Seen here are Power and O’Hara looking out the window of The Black Swan, a scene that was followed by both jumping into the water, which was shot as the movie’s original ending.  However, the Hays Code took exception and forced a reshoot, which resulted in the film ending with the couple locked in a kiss.