Next weekend I’ll be at Capitolfest in Rome, New York, my first visit to the festival and the city.  Capitolfest, which will be celebrating its eleventh incarnation, honors silent film and early talking films.  I couldn’t be more excited to venture into the world of silent film for an entire weekend – a first!

The planned schedule for Capitolfest 11 is available here and it is fantastic!  Not only does the weekend promise feature films starring some of silent films greatest stars, like Lon Chaney, all screenings will have live organ accompaniment on one of the few surviving fully-working Möller organs.   The line-up also includes film shorts, a variety of archival DeForest Phonofilms, newsreels – you name it – all geared toward fulfilling the festival’s goal “to re-create the experience of seeing movies as when they were new.”  The film program spans from the 1910s through the 1930s.  But it’s clear, as fabulous as the planned schedule of films is, that this weekend event is as much about the space and experience of cinema as it is about the archival prints.   I cannot wait to step foot in the historic Capitol Theater, which dates to 1928 when construction was started in the then 2,000 seat house.  The Capitol seats 1,788 today due to needed compliance work through the years.  You can learn all about the Capitol Theater, including its history here. 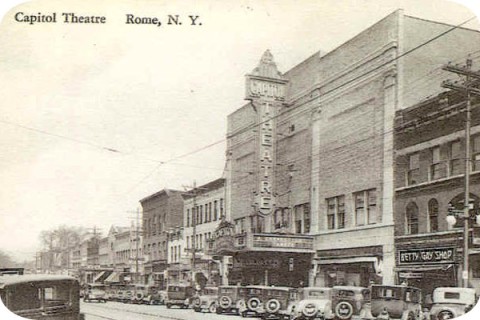 Being that I’m a newbie with regard to silent films, particularly with regard to their screenings in theaters, I reached out to Art Pierce, the Executive Director of the Capitol Theater to see if he’d mind answering a few very basic questions.  Mr. Pierce, who granted me media credentials to cover the festival on this site, was extremely gracious, giving no indication my questions were sophomoric though clearly they are.  But what can I say, I’m starting with as clean a slate as possible.

Here is what I asked and his replies – Basics on Capitolfest:

Q:  What is the general procedure involved in choosing the films to be featured at the festival?

A:  I read a great many period reviews, particularly from Harrison’s Reports, which reviewed most of the movies released in the U.S. between 1919 and 1962.  When I come across a good review of a movie that isn’t generally available, I put it on a list and later do a query with archives and studios to see if 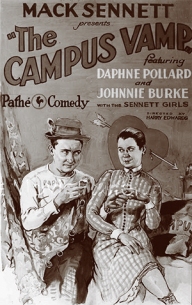 there is a 35mm print available.  So we always have a list of movies we can get from various sources, some get shown one year, some another, depending on what fits into our schedule best.  And they’re always movies that were critically acclaimed when they were first released, and often have been virtually unseen since then.

Q:  For the most part, is musical accompaniment taken from original film music, if available for a particular film?  If not, how is the music chosen for each film and by whom?

A:  As you probably know, except for the biggest movies, original scores were generally not composed for films during the silent era.  In most cases, however, there were cue sheets issued with suggested music to use with the films.  In our case we sometimes compile scores from the original cue sheets which, though it takes a great deal of effort (particularly in tracking down the recommended selections), is very rewarding.  This only works, though, if we can get a “screener” copy of the movie for our organist to rehearse with in advance.  Getting a screener made (on DVD) is also something of an effort, as, if the movie is copyrighted, we have to get special permission to be allowed to do this.  Then, of course, one has to get the archive to dub the movie onto DVD–archives are notoriously overworked and understaffed, and so this is not always possible.  What usually happens is that the organist is seeing the movie for the first time, just like the rest of us, and he improvises the score.  This is often the very manner in which these movies would have been approached when they were new, so there’s a authenticity in THAT as well.  If there’s a theme song to the film, we try to get a copy to our organist so he can work it into his score.  (Such is the case with “Flaming Waters,” the theme song of which [“Danny”] will be played by Dr. Philip Carli as part of his score.)

Q:  I’m particularly thrilled to be at Capitolfest this year when your tribute star is Carole Lombard.  How was that choice made?

A:  We try to pick a star who is “box office” with our attendees, naturally, and Carole L. certainly fills the bill there.  We also make it a point to select a star who can be seen in both silent and talking films, and preferably in both supporting and starring roles.  And, finally, there has to be enough rare 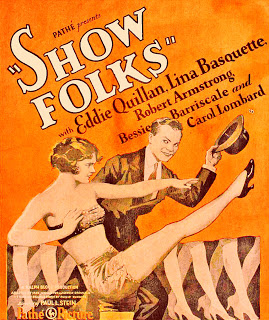 and desirable films available to us that are rarely screened.  (We also pick one “war horse,” generally with our tribute star, to run on Friday night–that’s why we’re doing “Nothing Sacred” this year in a new restoration.)

Q:  Finally, I love your motto, “A vacation, not a marathon” – can you discuss how this motto came to be?  and why?

A:  When Doug Swarthout and I started Capitolfest 10 years ago, we thought about what we liked and didn’t like about other movie festivals.  One thing we weren’t crazy about was the tendency to cram as many movies as possible into a weekend (although there are certainly pros to that approach as well).  If one watches everything they want to see they generally wind up at the end of the weekend looking (and presumably feeling) like a zombie.  And for us, anyway, we had trouble after it was all over distinguishing one film from another.  So our thought was to do fewer films with longer breaks, allowing attendees to savor the movies and see EVERYTHING (if they wanted to) without feeling absolutely exhausted.  Plus we have a Saturday afternoon cook-out in front of the theater, and pretty much everything anybody needs is located within a couple of blocks of the Capitol, so it really does give the festival a “vacation” type atmosphere.

It’s all fascinating to me and I extend a great big thanks to Art Pierce for indulging me.  While I loved the Turner Classic Movies Film Festival (TCMFF) and its frenzied schedule earlier this year, because it left me wanting more, I look forward to this relaxed schedule, which is ideal for me since I wouldn’t have had a clue which silent film to choose had Capitolfest featured simultaneous screenings.

The festival starts on Friday, August 9 with a noon screening of F. Harmon Weight’s, Flaming Waters (1926), the only digital presentation of the entire weekend.  All 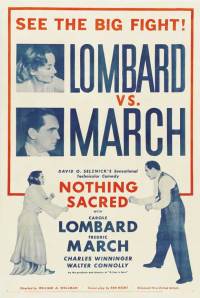 other screenings will be shown in 35 mm prints.

One final note because it’s especially thrilling – the program is dedicated to Carole Lombard, this year’s tribute star as mentioned above.  The entire line-up planned for the Friday night session is dedicated to Lombard with screenings of Harry Edwards’ short, The Campus Vamp and Paul L. Stein’s, Show Folks both from 1928 followed by a newly restored presentation of William Wellman’s, Nothing Sacred from 1937, which is the most contemporary film of the weekend and one of the few films featured that I’ve seen – though never on the big screen.  In all, seven films featuring Lombard are planned throughout the weekend, including an installment of the newsreel/magazine, Voice of Hollywood #12 with footage of Carole and William Powell.  Need I say how excited I am to see that?

There’s a lot more to say about this year’s Capitolfest schedule, but I’ll leave further commentary on this blog until my return from Rome when I post a festival recap and make note of highlights.  During the festival I’ll be tweeting and posting to FB – @CitizenScreen and Citizen Screen respectively if you want to follow along.  Until then I count the days till I get to meet many other classic film fans and share in the joy and art of classic film.  In silence.