It’s the latter part of the Nineteenth Century – when the West was being won.  Our story takes place in the town of Deadwood in the Black Hills of South Dakota as depicted in David Butler’s 1953 musical, Calamity Jane. 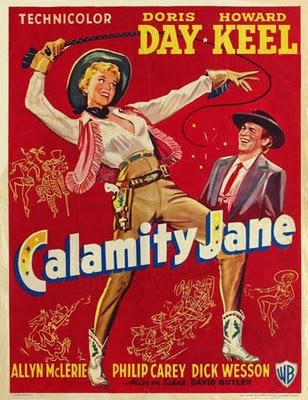 The town of Deadwood is filled with colorful characters who spend their abundant free time at the Golden Garter Saloon.  When the story in Calamity Jane begins in earnest most of those characters are in an uproar, flinging threats at the saloon owner. They want the best entertainment possible and the best entertainment possible, by their estimation, is Adelaide Adams, a popular singer who they know through pictures on cigarette packs.  The fact that every man in Deadwood wants Adelaide Adams stupefies Deadwood’s most colorful character of all, frontierswoman, Calamity Jane (Doris Day). 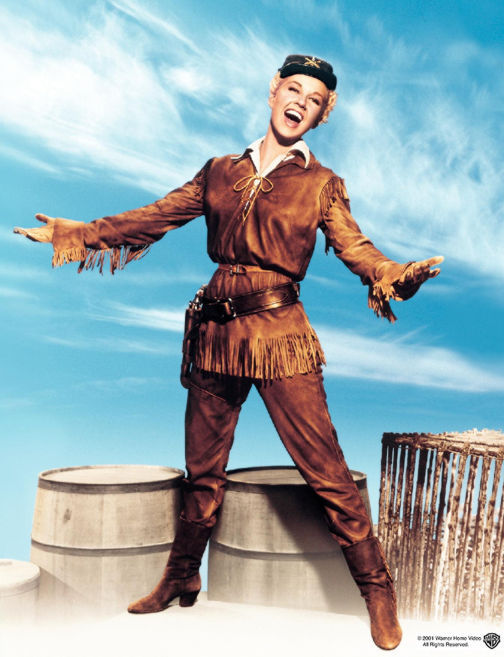 Calamity, determined to save the saloon from angry mobs and eventual financial ruin, volunteers to go to Chicagy and bring the one and only Adelaide Adams to Deadwood.  So onto the train she goes into the big city and the grand show place where Ms. Adams is entertaining a packed house.  Unfortunately, by the time Calamity reaches the star’s dressing room, Adelaide is gone and pretending to be her is Katie Brown, the maid.  Mistaking Katie for Adelaide, Calamity convinces the woman to go with her to Deadwood to sing at the Golden Garter.  It just so happens that Katie was quite easy to convince because she’s longed to be a star herself her entire life.  So what if she has to pretend to be Adelaide Adams to get on a stage?!

After crossing dangerous terrain, with Indians in hot pursuit, the two arrive in Deadwood, unscathed, and to tremendous fanfare.  Katie easily passes for Adelaide so all the men are tripping over themselves to get her attention.  But just as Katie is to go onstage the other performer on the Golden Garter bill who happened to have headlined with the real Adams once lets her know he knows her charade, albeit by way of wishing her luck.  Katie’s nerves get the best of her and she sounds terrible – nothing like the Adelaide Adams Calamity heard in the big city saloon so Katie’s forced to admit she’s an imposter.  No one is more shocked than Calamity Jane who was riding high on everyone’s admiration after bringing the great Adelaide to Deadwood.

Needless to say the entire saloon turns against Katie but Calamity comes to her rescue.  All Katie wants is to be an actress so why not give her a chance?  And sure enough, Katie as herself is a pretty good talent.  And a looker too as both of the men in Calamity’s life fall for Katie.  NOW we have a problem!

Although Calamity is surrounded by men in Deadwood, there are two who are special to her – best friend and legend of the Old West in his own right, Wild Bill Hickock and her secret crush, Lieutenant Danny Gilmartin.  After Katie’s successful stage debut at the Golden Garter, she moves in with Calamity and ends up teaching the wild woman the finer points of femininity.  Meanwhile, both Wild Bill and Danny make a mad dash to try to win Katie’s favor by inviting her to the upcoming Fort Scully Ball.  Appreciative of Calamity’s kindness and friendship, Katie tries to convince the fellas that either would be lucky to take Calamity as his date, but the two think she’s crazy. Regardless, they agree to draw straws with the loser ending up with Calamity – the loser is Wild Bill.

Meanwhile, Katie is smitten with Danny and he with her but she knows of Calamity’s feelings for him so she tries to dissuade his advances.  Calamity finds out about it, however, becomes jealous and orders Katie out of Deadwood.  Katie, not wanting to break Calamity’s heart, leaves without telling anyone.  In the meantime, Bill makes Calamity face the facts about Gilmartin’s feelings for Katie and in the process his own romantic feelings toward Calamity come to light.  Suddenly Calamity herself realizes that she’s had a “secret love” for Bill all along and when she finds out that Katie has left Deadwood she vows to bring her back.  In true Calamity Jane fashion, she catches up with the coach that’s taking Katie away and tells her friend of her impending wedding – to Wild Bill Hickock!  Katie returns to Deadwood and to her intended, Danny Gilmartin.

In the end there’s a double wedding with Katie marrying Danny and Hickock marrying the beautiful Calamity Jane.

Calamity Jane is one of my favorites of Doris Day’s movies and I like quite a few of them a lot.  This one is pure, unadulterated entertainment.  Day plays Calamity with energetic aplomb – she sings, gun-slings, rides horses, fights indians, climbs moving stage coaches, saves damsels in distress and dances – offering everything she’s got and she’s got a lot to offer as one of classic cinema’s true quadruple threats!  Add to all that a sweet vulnerability that’s irresistible.

Also delivering a fun performance is Howard Keel as Wild Bill Hickock, matching Ms. Day note for note and quibble for quibble as the two share delightful scenes together.  This is actually my favorite of all Keel movies.  The rest of the cast in Calamity Jane is great also – Allin Ann McLerie as Katie Brown, Philip Carey as Lt. Danny Gilmartin and Chubby Johnson as Rattlesnake, a smaller part that’s reminiscent of classic Gabby Hays – are standouts, but check out the entire cast here as the film is replete with familiar faces (even to me) from classic Westerns.  Beautiful sets and wonderful costumes brought to you in glorious Technicolor ALL help make this film memorable. 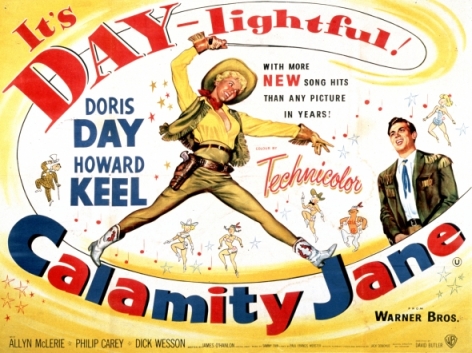 OH!  And those songs!  Calamity Jane is filled with great songs resulting in the film’s music being well-represented at the 1954 Academy Awards, receiving three nominations and one win. Best Music, Original Song went to “Secret Love,” wonderfully interpreted by Doris Day in the film and one she recorded in ONE TAKE!  She’s in outstanding voice throughout, by the way, a reminder (in case anyone needs it) that she remains one of the finest interpreters of American Standards ever.  “Secret Love” went on to sell well over a million copies, topping the Billboard charts at number one and earning Day another gold record.  The two other Oscar nods received were for Best Music, Scoring of a Motion Picture and Best Sound, Recording.  Howard Keel’s rendition of “Higher than a Hawk” is another favorite of mine by the actor in any movie, and “The Black Hills of Dakota” sung by the foursome as they make their way to the Fort Scully Ball is another great one.  The Calamity Jane soundtrack reached number two on Billboard, which was “normal” for Doris Day film soundtracks. 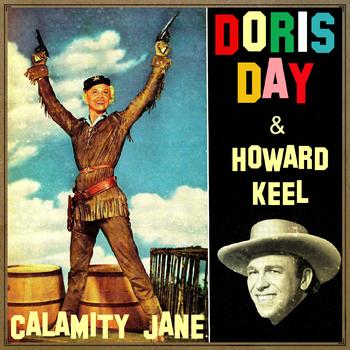 Calamity Jane, the film Doris Day has often cited as her personal favorite among her 39 film appearances (IMDB) was made by Warner Bros.’ head, Jack Warner after he tried and failed to buy the rights to the film version of “Annie Get Your Gun” as a vehicle for Day.  In response to MGM, who had a hit with George Sidney’s, Annie Get Your Gun (1950), Warner not only made a film focusing on another “wild woman” of the Old West as his heroine, but also hired the same male star from Annie Get Your Gun, Howard Keel.  One can’t discount the similarities between the themes of the two movies and the parallels between the two tomboyish, gun-slinging main characters. but as much of a fan as I am of MGM musicals, I think Warners bettered the musical colossus, MGM in this instance.

Calamity Jane is often outrageous and over-the-top and far from historically accurate.  But who cares?!  If you want gosh-darn facts go watch some critters on PBS!  Leave the rest of us varmints to wonderful flights of fancy and utterly cheerful abandon in the Black Hills of Dakota.

Not only have I been hearing Calamity Jane yell, “MAKE MINE SASPARILLY!” at the Golden Garter saloon for decades, I’ve also heard classic, Warner Bros. cartoon character, Yosemite Sam demand, “sasparilly, and make it snappy!” countless times.  Yet, I’ve never known what the drink actually is.  Until now.  So, in case you too wonder about the seemingly popular imbibement here is the answer:

The drink was actually called either sarsaparilla or sasparilla and took on the Old West pronunciation by way of these (and other) popular characters depicting Old West slang. Saparilla was made from the root of the sarsaparilla plant, and it tasted much like today’s root beer, according to every place I looked.  Although it’s now made with in a variety of flavors.

This post is submitted as an entry to the Summer Under the Stars Blogathon (SUTS) (2013), hosted by Jill of Sittin’ On a Backyard Fence and Michael of Scribehard on Film.  The blogathon coincides with Turner Classic Movies’ SUTS event, which lasts all of August each year with each day focused on a different classic star.  Be sure to visit either host site to enjoy entries honoring some of the greatest stars to appear on the silver screen all month long.  Also, be sure to tune in to TCM every single day in August or set your DVRs.  For classic film fans this is as grand as it gets.

And by the way, Calamity Jane is the prime time (8:00 pm est.) entry on TCM’s all-day salute to Doris Day on August 2nd. 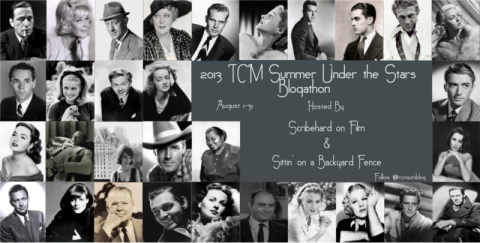