I have lauded the work of Sidney Lumet several times on this blog because he is one of my all-time favorite directors. Lumet was a purveyor of truth whose work is as memorable and thought provoking as that of any director I can think of. Today I comment on one of his most underrated films, which happens to be one of the greatest thrillers of all time. From 1964 and likely to give you nightmares, Lumet tackles nuclear annihilation in Fail-Safe, screenplay by Walter Bern­stein, from the book by Eugene Burdick and Harvey Wheeler.

We are at Strategic Air Command headquarters at the Air Force Base in Omaha, Nebraska at the height of the Cold War. An unidentified aircraft has passed into American airspace and an intruder alert is issued in response. Soon after, the aircraft is identified as a civilian plane and the alert is cancelled, but a computer overrides the cancellation and sends orders to an American bomber unit to attack Moscow.

The seemingly simple scenario I just described is the premise of Fail-Safe, the title of which refers to the point of no return, in a sense. Much of the tension in the movie comes from the fact that when the pilots of the bombers are given the fail safe order they can no longer accept voice commands, which means all attempts to stop their trajectory toward Moscow are futile. The scenes are extraordinarily moving as these men know they are flying their final missions. Equal in intensity are the scenes on the ground in various locations like the Pentagon and Air Force headquarters where the people who advise and/or make the decisions either rise or fall with the pressure of knowing they must kill Americans to avoid an all out war. Tension builds as the bombers reach the Russian border and advance from there. Then there is the President, played by Henry Fonda, the man who has to make the ultimate decision to save the world after trying his best at diplomacy. How does one apologize for bombers though? How can such an error be corrected? How does one make up for the annihilation of a city?

Sidney Lumet chose to film the scenes with the President in a small room, the sort of claustrophobic environment he excelled at. These are reminiscent of 12 Angry Men  – aside from the Fonda factor – with tension-filled close-ups that result in high drama on a personal scale. In his book, Making Movies, Lumet comments on how the more confined a shot or choice is, the more universal the theme it depicts, which is fascinating. We see that clearly in both 12 Angry Men and Fail-Safe with both films spotlighting the personal stories of various characters while tackling huge issues like the value of life done in close-ups that move even the cynic.

Lumet’s other standout talent was directing actors and he had plenty of greats to showcase this. In Fail-Safe it’s Henry Fonda who is fantastic every second that he is on screen with the signature, methodical gravitas that makes him one of the all-time great actors. As the President here Fonda plays both a man grappling with the fate of the world and a human being who suffers the order he will eventually have to give. Larry Hagman is also great as the young Russian interpreter in the room with the President. Hagman and Fonda have terrific chemistry as the two are acquainted in a historic circumstance. Also in the large ensemble cast are Dan O’Herlihy who turns in another terrific performance, Frank Overton, Walter Matthau, who is perhaps my least favorite character and depiction in the movie, Fritz Weaver in his feature film debut, Edward Binns, another alum from 12 Angry Men, and a young and very serious Dom DeLuise. The entire cast and crew list is available here. The performances in Fail-Safe are so good, the story so compelling, and Lumet’s eye for drama so on point that the movie’s measly budget is rendered completely unimportant.

Another significant Lumet choice is the absence of a score, which heightens the realism and suspense in Fail-Safe. The set up for one scene where a shrill sound will be heard results in a heart wrenching reaction from this viewer because of the silence that has preceded it all along. The President is on the phone with the American Ambassador to Russia who is in Moscow with no means of escaping the bombs that are about to be dropped on the city. The Commander-in-Chief explains that he will know when the ambassador is dead because he will hear a shrill sound as the phone melts in his hand. We know it too, but when the sound comes through the receiver it is in stark contrast to the silence we’ve come to expect and the result is an unexpected grief that breaks me.

Fail-Safe was released in October 1964 to stellar critical acclaim, but audiences largely ignored it. Many attribute its disappointing audience turnout to the popularity of Stanley Kubrick‘s similarly themed farce, Dr. Strangelove or: How I Learned to Stop Worrying and Love the Bomb, which was released in January that year. It’s really too bad Lumet’s film was overlooked as it continues to be today because it is one of the best anti-war movies ever made and, as I mentioned previously, an all-time great thriller that deals with what is possibly everybody’s worst nightmare, nuclear war. While Kubrick’s film deals with the serious matter in humorous fashion, Fail-Safe tackles it with an intensity, intelligence and efficiency that moves you to pieces. The dilemma here is excessive dependence on the efficiency of machines and perhaps the most frightening thing this story illustrates is that even rational, intelligent people cannot undo certain errors that may occur. That truth is a shocker and it makes you think about possibilities even today. When Henry Fonda – as the U.S. President – gives up what he gives up in order to avoid war…it’s terrifying.

Sidney Lumet ends Fail-Safe with devastating, frozen frames of humanity and they will rattle you. Fail-Safe is being screened at TCMFF this year and I am considering not going to that screening because I’m not sure I can take it on a big screen. I would, however, recommend it to everyone.

This is my entry to The End of the World Blogathon hosted by Movie Movie Blog Blog and The Midnite Drive-In. Be sure to visit the dooms day treats! 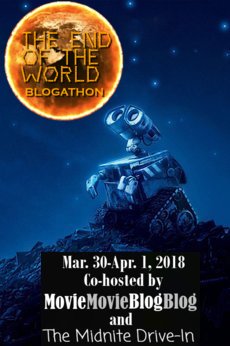