Lupita Tovar was born Guadalupe Natalia Tovar in the town of Matías Romero Oaxaca, Mexico on July 27, 1910. Tovar is best remembered for her role as Eva in George Melford’s Spanish-language version of Dracula (1931), but she was credited in over 31 movies in a 16 year-long movie career. That span may seem trivial compared to the careers of many of the movie legends admired today, but Ms. Tovar’s connection to Hollywood history and the important role she played in Mexico’s film industry cannot be understated.

The oldest of nine children, Lupita Tovar was discovered at the age of 16 when Hollywood talent scouts visited her school in San Pedro de los Pinos near Mexico City where she grew up. Legend has it Lupita dazzled the scouts with her beauty and despite her father’s protestations accepted a contract with Fox Studios. Lupita went to Hollywood in 1928 accompanied by her grandmother and began taking dancing lessons with Eduardo Cansino whose daughter Margarita would also have dreams of a Hollywood career one day. Lupita appeared in four movies for Fox and worked with the likes of John Ford and Raoul Walsh while there. When Lupita’s contract with Fox expired she went to Universal where she was put to work immediately on Spanish-language versions of Hollywood movies. As you probably know Hollywood had the practice of making multiple language versions of their own movies primarily during the early 1930s. These were low budget productions, which didn’t do badly at the box office. Foreign audiences lost when Hollywood movies began to speak English were kept somewhat entertained by these movies. You can read a bit more about Spanish-Language Hollywood here if interested.

Lupita Tovar arrived in Hollywood just as the movies were transitioning to sound. She appeared in a couple of silent pictures, but with no formal training, no acting resume to speak of and a heavy Spanish accent Tovar’s Hollywood career was virtually over before it began. If not for the Spanish-language movies, an idea credited to Paul Kohner, an executive at Universal and Lupita’s future husband, who knows what may have 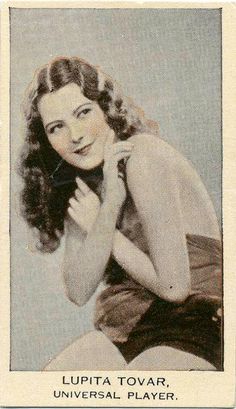 Paul Kohner arrived in Hollywood from his native Czechoslovakia in 1920 to work for Carl Laemmle at Universal Studios. Mr. Kohner worked in publicity, distribution and production for Universal on both coasts. Kohner would later manage the careers of famous Hollywood players through the Paul Kohner Agency established in 1938. He also produced dozens of Hollywood films in several languages. Among those were La Voluntad del Muerto (1930) and Drácula (1931), the Spanish versions of The Cat Creeps and Dracula respectively – both of which starred Lupita Tovar.

Paul Kohner and Lupita Tovar were married on October 31, 1932, a union that lasted until Kohner’s death in 1988. The couple had two children who also went into the movie business. Pancho Kohner is a producer, director and writer and Susan Kohner an actress. You may remember Susan Kohner’s memorable, Oscar-nominated performance as the troubled Sarah Jane in Douglas Sirk’s Imitation of Life (1959). Susan’s sons, Chris Weitz and Paul Weitz also went into the movie industry as writers, producers and directors.

“I met Paul in late 1929, went in September of 1932 to Berlin, and married him in October ‘32. We had a wonderful life together.” – Lupita Tovar, an interview by Mike Fitzgerald

The legacies of both Paul Kohner and Lupita Tovar are much deeper than even the generations of movie industry players they directly produced. Ingmar Bergman who was both a client and friend of Paul Kohner’s once said that Kohner’s life “includes the history of the movies” and Lupita Tovar was once promoted as “the sweetheart of Mexico.”

Lupita Tovar followed her appearance in Drácula with the landmark Santa (1932) directed by her co-star in La Voluntad del Muerto, the versatile Antonio Moreno. Santa is credited by many to be the film that introduced the golden age of Mexican cinema, which lasted through the mid-1950s. Despite the fact that Santa is the second of what would be four versions of a story based on a novel by Federico Gamboa it is memorable. Tovar delivers an affecting performance as a beautiful, innocent Mexican girl who’s seduced by a soldier, Marcelino (Donald Reed). Santa was a huge success and it cemented Lupita Tovar’s legacy as a film pioneer in a burgeoning world cinema.

Another worthy Tovar appearance is in Eduardo Arozamena’s Carne de Cabaret (1931), the Spanish-language version of Lionel Barrymore’s Ten Cents a Dance starring Barbara Stanwyck and Ricardo Cortez. I’ve yet to see Carne de Cabaret, but am looking forward to it. In it Lupita Tovar plays the same role as Stanwyck in the English version and by all accounts she’s just as memorable. I would also love to find a copy of Vidas Rotas (Broken Lives) from 1935 directed by Spaniard, Eusebio Fernández Ardavín. There’s limited information available on Vidas Rotas, but my curiosity about it was piqued when I saw that Tovar stars alongside Maruchi Fresno, a prolific actress who appeared in several Hollywood productions as well as in telenovelas that my grandmother mentioned to me.

“I made many films—six for Mexico; one in London with Buster Keaton. I did everything! I did one in Spain and, here in the United States, mostly Westerns.”

The fact that Lupita Tovar appeared in several Westerns is no surprise since many Spanish-speaking actors were relegated to stereotypical roles and this particular genre was replete with them. She co-starred with Buck Jones in Louis King’s Border Law in 1931, appeared in William Dieterle’s Blockade starring Madeleine Carroll and Henry Fonda in 1938, co-starred with Gene Autry in George Sherman‘s South of the Border in 1939 and with George O’Brien in David Howard’s The Fighting Gringo that same year. In 1941 Tovar co-starred with Don ‘Red’ Barry of Adventures of Red Ryder fame in Sherman’s Two Gun Sheriff. Lupita’s last film was also a George Sherman vehicle, The Crime Doctor’s Courage (1945) starring Warner Baxter and Hillary Brooke, which is a delicious-sounding mystery.

Most surprising to me was learning that Lupita made a movie with Buster Keaton, Adrian Brunel’s An Old Spanish Custom aka The Invader (1936). Of the experience Tovar recalled how she almost drowned during a scene with an inebriated Buster. This is another one I’ve yet to see.

Lupita Tovar gave up acting in the 1940s, but not before making two other notable Mexican pictures. The first is Gilberto Martinez Solares’ romance Resurrección (1943) co-starring Emilio Tuero (who I just saw in Antonio Momplet’s entertaining noirish drama, Vértigo with María Félix) and the legendary Sara García.

When Lupita Tovar passed away in November 2016 there was renewed interest in her career well beyond what made her the oldest living actress at that time. She was also recognized by most film aficionados as the royalty she was. If you’re interested in learning more about Ms. Tovar’s life and career I Highly recommend Lupita Tovar The Sweetheart of Mexico: A Memoir (Paperback 2010) written by her grandson Pancho Kohner.