I’ve been shamefully negligent in even referencing the role Spanish language movies played in my life.  While I didn’t spend as much time watching movies in Spanish as I did Hollywood productions I have vivid memories of many I watched with my grandmother with whom I shared a room as a child.  Most of those were films were productions of the golden age of Mexican cinema, which like Hollywood films were shown on television on a regular basis.  If memory serves the ones that aired most often were films of the 1940s and 1950s.  As such I’m not familiar with the work of the actress I honor today – the oldest living actress I believe – Lupita Tovar who celebrated her 104th birthday on July 27.

Lupita Tovar was discovered and contracted by Universal and is best known (perhaps) for her role in George Melford’s, Spanish language version of DRACULA (1931) filmed concurrently with the famous Tod Browning version.  However, in her native Mexico the role she played as part of the country’s movie history is much more substantial.

Right after appearing in DRACULA Tovar played the lead role in SANTA (1932) Mexico’s first talking picture, which was a huge success.  SANTA is credited by many to be the film that introduced the golden age of Mexican cinema, which lasted through the mid 1950s.  The popular practice in Hollywood through the early 1930s was to film Spanish versions of their own films, which didn’t do badly in the box-office.  But there was a hunger growing throughout Latin America for original productions of Spanish language films, a hunger that the Hollywood “copies” was not quelling.  SANTA went far in establishing the fledgling industry in Mexico, which produced world renown films and an impressive array of talent through the years.  It’s important to mention, however, that it wasn’t as though Hollywood had nothing to do with this production as the film’s director, star, technicians and artists were in large part imported from Hollywood – but it was a major step for Mexico.  For a complete list of SANTA’S cast and crew look here. 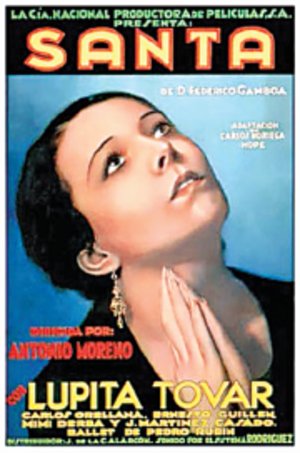 SANTA was directed by Antonio Moreno and is the second of what would be four versions of the story based on a novel by Federico Gamboa.  In fact, I remember watching the 1945 version of this film with my grandmother, ENTRE HERMANOS directed by Ramon Peon and starring the great Pedro Almendariz and Carmen Montejo who was one of my grandmother’s favorites.

In any case, in the 1932 version Lupita Tovar plays SANTA, a beautiful, innocent Mexican girl who’s seduced by a soldier, Marcelino (Donald Reed).  Santa falls hard for him and against her family’s wishes marries him.  Before long Marcelino abandons Santa as does her family.  Alone and desolate the young woman has no choice but to turn to a life of prostitution, becoming the most popular working girl in all of Mexico.  As the years pass Santa becomes an embittered woman with no will to live.  In other words, don’t be deceived by the girl’s name or the film’s title.  SANTA is a drama that has nothing to do with a bearded, jolly man living in the North Pole.  In Spanish the word “santa,” means “female saint.”

The story in SANTA is familiar, but the film is quite good with Tovar delivering an especially affecting performance.  I watched the movie on YouTube out of curiosity and it looks great, although the dialogue is a bit out of sync throughout the video.  Except for the language I wouldn’t distinguish this movie from Hollywood early talking pictures.

It was a pleasure watching this movie and Lupita Tovar’s talent beyond the realm of DRACULA, which I’ve seen many times.  With this humble post I wish her a happy 104th – you have a new fan, Ms. Tovar!  And since this is the first Spanish language movie I comment on in this blog, you are a film pioneer here as well as in real life. 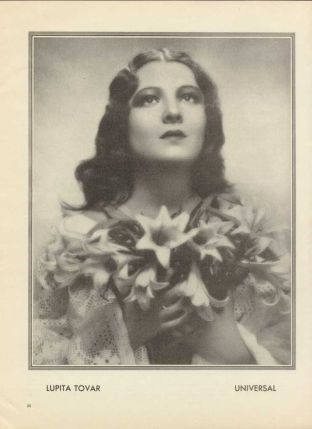 As an aside for anyone who may not be aware – Lupita Tovar had two children with producer/agent Paul Kohner – Pancho Kohner, a producer and Susan Kohner an Oscar-nominated actress best known for her performance as the adult Sarah Jane in Douglas Sirk’s IMITATION OF LIFE (1959).  Lupita Tovar gave up acting in the 1940s and wrote Lupita Tovar The Sweetheart of Mexico: A Memoir, which I’m dying to read.

I am resubmitting this entry as part of Hollywood’s Hispanic Blogathon hosted by Once Upon a Screen and Movie Star Makeover.  Be sure to visit the host sites to read about many of the great Hispanic-themed films and other Hispanic stars who’ve shined in Hollywood.

During rehearsal of Lux Radio Theatre’s presentation of "My Man Godfrey," in 1938: David Niven, Carole Lombard, William Powell, Gail Patrick, and program host Cecil B. DeMille.
“There are no third worlds. There is no West. There is only one holistic system of systems, one vast and immane, interwoven, interacting, multivariate, multinational dominion of dollars.”
Loading Comments...
%d bloggers like this: