Legend has it that The Holy Grail was the cup used by Jesus Christ during The Last Supper and later where His blood was received as it flowed at the crucifixion. After Christ’s death The Holy Grail was given to Joseph of Arimathea who was later imprisoned and left to starve. It was The Holy Grail that sustained him for several years by providing him food and drink every day. After his release Joseph traveled extensively parting ways with The Holy Grail upon arriving in Britain. Eventually the Grail was housed in a castle and guarded by Grail Kings (a Fisher King in some versions). Over the centuries, however, the location of the castle was forgotten, but the legend of The Holy Grail lived on. During the reign of King Arthur it was prophesied that The Holy Grail would one day be rediscovered by a descendant of Joseph (later St. Joseph) or the greatest knight in the land. Rediscovering The Holy Grail became the principal quest of the Knights of King Arthur. How those knights came to assemble under the tutelage of King Arthur of the Britons is the beginning of the story in Monty Python and the Holy Grail (1975) directed by Terry Gilliam and Terry Jones.

If by my introduction I gave you the impression that Monty Python and the Holy Grail is in any way a serious attempt to tell the story of the search for the mythical cup then I must apologize. While it helps to know the basics behind the legend you must put aside reason and prepare to laugh in order to enjoy the movie, which like the legend, still lives on.

“I seek the bravest and the finest knights in the land who will join me in my court at Camelot.”

As mentioned, our story begins as King Arthur of the Britons (Graham Chapman) crosses the countryside in search of men worthy enough to join his Round Table in the court at Camelot. Few men take him seriously though and the movie takes no prisoners from the very first scene – one of my favorites – when we see Arthur and his faithful squire, Patsy (Terry Gilliam) on horseback approach a castle to ask for worthy men. Or…that’s the thing. The running joke throughout Monty Python and the Holy Grail is that there are no horses, but just the sound of them created by hitting two coconut halves together. In this case it’s Patsy while King Arthur simulates horseback riding on his own feet. That in itself is funny enough, but when Arthur calls up to the castle guard in that first scene and the guard begins a long exchange about how odd it is that there are coconuts in that part of the world I am stitches.

On his journey through the lands Arthur asks several men to join his court, including the powerful Black Knight (John Cleese) who is (arguably) the most in denial man who has ever held a sword. When Arthur approaches the Black Knight is guarding a bridge, which is really a small plank that’s placed over an equally small stream. King Arthur must cross the stream in order to continue his journey, but the Black Knight is there to stop him from crossing. Arthur has no choice but to battle the Knight with his sword. Now at first it doesn’t seem a possible win for Arthur given the Black Knight is larger and meaner, but the results are surprising in one of filmdom’s most memorable sword fights.

Before King Arthur even breaks a sweat the Knight’s left arm is cut off, “tis but a scratch” he says to Arthur’s disbelief. At the Knight’s insistence the fight continues for a few moments before Arthur severs his right arm, “just a flesh wound” he says casually. WHAT? How can that be? Suddenly the Knight starts kicking the King until he is sans left leg… and so forth. When the Black Knight is nothing but an upper torso in the mud he still calls out to Arthur – who is crossing the stream with Patsy – “alright we’ll call it a draw.”

The sword fight between the Black Knight and King Arthur of the Britons occurs early in Monty Python and the Holy Grail and it shouts to the viewer to brace him or herself. You are about to watch comedy the likes of which you’ve never seen. At least I imagine that was the case in 1975. Since then Holy Grail-like humor has been seen many times and in many places including on Saturday Night Live, which premiered a few months after this movie. The influence is undeniable. In any case, the duel between Arthur and the Black Knight is the reason I chose this movie as my entry to the Swashathon hosted by Movies Silently.

You should know that both John Cleese and Terry Gilliam performed all of their own stunts during the memorable duel. Each had to learn to manage big and heavy swords and to do some acrobatics. It’s interesting to know because they wear such heavy costumes that stunt men could have easily taken their place and we wouldn’t be the wiser, but as the actors have said in commentaries, they had a lot of fun enacting the duel. (IMDB)

To continue our story – needless to say the limbless Black Knight does not join Arthur at his legendary Round Table, but the King soon finds men suitable for the honor. Among these are Sir Bedivere the Wise (Terry Jones), Sir Lancelot the Brave (John Cleese), Sir Robin the Not-Quite-So-Brave-as-Sir-Lancelot (Eric Idle), and Sir Galahad the Pure (Michael Palin). As you may have noticed already, John Cleese plays both the Black Knight and Sir Lancelot. As is the case with the other main actors in Monty Python and the Holy Grail he plays several characters. Those main actors are Chapman, Idle, Gilliam, Jones and Palin in addition to Cleese who wrote as well as performed in the movie. Or, as we all know them, the Brits who make up Monty Python. In case you’re interested in trivia, Michael Palin plays the most characters in the movie with 12. Take a look at the entire cast and crew list here.

After finding his knights, Arthur has his Round Table complete and the troupe head toward Camelot. While on their way, however, they are sidetracked by God who appears to them high up in the clouds to charge them with the quest for The Holy Grail. Clearly these are special men who are tasked by the Almighty. A few moments later they know how difficult a task this is going to be when they approach a castle and instead of being allowed entry they are attacked with flying cows. It becomes clear that if Arthur and the Knights of the Round Table are to bring the quest for The Holy Grail to a successful conclusion they must separate and increase their chances. Then – for a bit – Monty Python and the Holy Grail splits into each of the men’s tales. It’s in Lancelot’s tale that we get the second, hilarious sword fight when the brave knight storms Swamp Castle after his squire walks into an arrow with a note from a damsel who is being held prisoner.

Well…let me clarify two things: I’m calling it a sword fight even though Lancelot is the only one with a sword and I’m calling the note writer a damsel, but she’s really a man. You’ll have to get the details of the latter on your own, but as for the sword fight – an overzealous Lancelot stabs every inhabitant he encounters in the castle, including wedding guests as they dance. The sequence begins with two flower-adorned guards who watch the knight run up to them on foot from quite the distance away. Suddenly and without asking any questions Lancelot kills them to gain entry into the castle wherein he attacks everything that moves. This sword fight is significant because it includes the requisite medieval stairs central to so many legendary screen sword fights that preceded it.

The Knights of the Round Table eventually reunite again and celebrate heartily, but their quest continues to test their skills and bravery. Along the way they encounter dangers such as the Bridge of Death and the Gorge of Eternal Peril. The group is also forced to brave tough elements and manage to survive a year that skips summer. These are hearty, determined men, I tell ya. Eventually King Arthur and his knights are guided to the powerful thrower of fire called Tim the Enchanter, a name ad-libbed by John Cleese when he couldn’t remember the first name of the Enchanter. Tim points them to dangerous caves guarded by monsters wherein the location of The Holy Grail was noted by none other than Joseph of Arimathea of the famous legend noted at the beginning of this post. The inscription, which is supposed to be Joseph’s last words, leads the knights to the Castle of Aaaaarrrrrrggghhh and one wonders if Joseph was in pain and dying when he wrote that or whether it’s the actual name of the castle. In any case, danger still lies ahead for the Knights of the Round Table before they are able to complete the mission handed down to them because accessing Aaaaarrrrrrggghhh proves no easy task. If they are able to complete it that is.

It is noted in several places that the Python crew generally considered Monty Python and the Holy Grail to be one of their lesser movies, but audiences in 1975 and for the next four decades would disagree. The movie remains funny thanks to the fact that it is an actual series of gags set against the quest for The Holy Grail. The story is less important than the comedy, which is a constant reminder that nothing is to be taken seriously. As I read somewhere at some point, the secret to the Pythons’ success is that they respect nothing. And that is why Monty Python and the Holy Grail is noted on almost every list of all-time great comedies. The movie’s influence has also remained steady through the years. A legend in its own right.

In 2006 I was lucky enough to attend the Broadway musical Spamalot, which was the stage adaptation of this movie. I enjoyed it immensely. The gags worked really well on stage and I was particularly excited to see/hear the famous depiction of the galloping horses with coconut shells, an old radio gag that proved a godsend in the movie. Coconut shells were used because the movie production couldn’t afford to use real horses. The film’s abrupt ending also came about as a result of limited funds so what you get is the beginning of what would certainly have been an epic sword battle.

Be sure to visit Movies Silently and The Swashathon from July 14 – 17 for all things Swashbuckling in movies. Most, if not all, of the other entries use real horses. 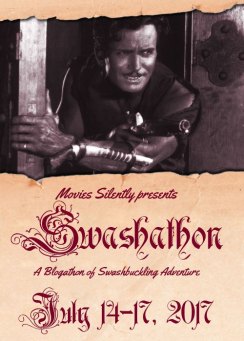