Today would have been Patrick McGoohan‘s birthday (19 March 1928 – 13 January 2009). Probably best remembered for his stint in The Prisoner (1967-1968), McGoohan’s commanding presence and memorable, gravelly voice ensure you’re unlikely to forget him in any show or movie you may see him in. 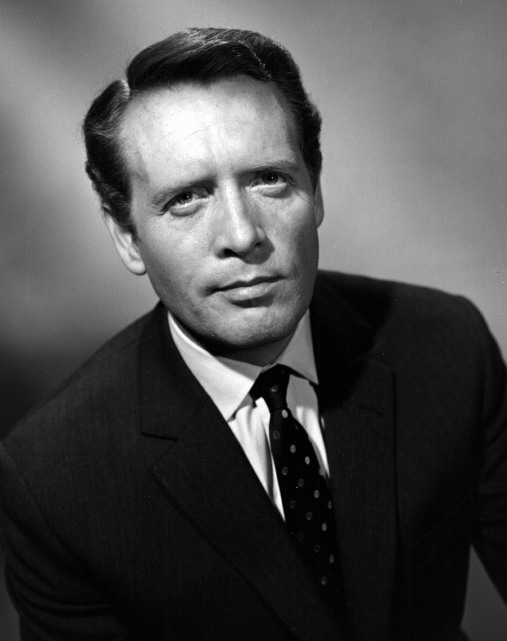 Despite Patrick McGoohan’s impressive list of credits, I am most familiar with him as the great Columbo villain he was. As a murderer McGoohan was tops playing adversary to the legendary Lieutenant and did so four times winning two Emmy Awards in the process. The four episodes are: “Columbo: Identity Crisis” (1975), “Columbo: Agenda for Murder” (Emmy-winning performance, 1990), “Columbo: Ashes to Ashes” (1998) and the one I am lauding today, McGoohan’s first appearance on Columbo, “By Dawn’s Early Light” (1974). 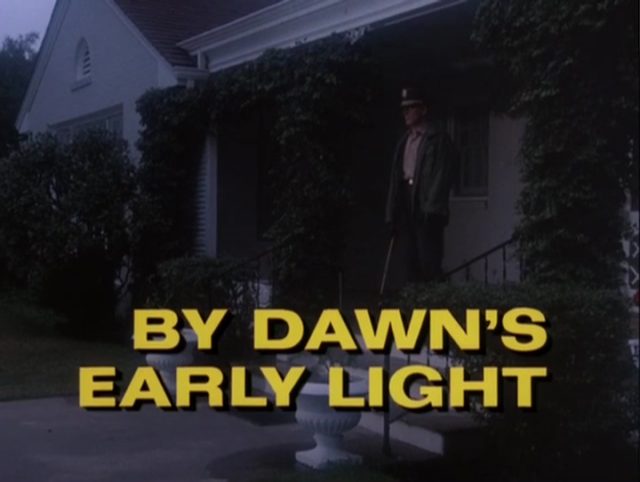 It’s worth noting that Patrick McGoohan also directed all of the episodes of Columbo in which he appeared except for our featured episode. He also directed two others in the series, “Last Salute to the Commodore” (1976) and “Murder with Too Many Notes” (2000).

Before I get to my commentary of “By Dawn’s Early Light,” there’s an interesting tidbit noted in IMDB regarding Patrick McGoohan and Columbo. As unfathomable as that is, McGoohan was considered to replace Peter Falk as Columbo. Can you imagine anyone but Falk playing the greatest detective in TV history? Well, as the story goes, McGoohan turned down the part because he was a close friend of Falk’s and believed that only Falk should play Columbo. That. Is. All.

The complete cast and crew listing is available here. There are several familiar, character faces you’ll recognize including the father-son acting duo of Bruce Kirby and Bruno Kirby.

“By Dawn’s Early Light” takes place in a military academy whose commandant, Col. Lyle C. Rumford (McGoohan), murders the academy’s chairman of the board because the victim wants to replace him. As with all Columbo episodes the murder happens right at the beginning. In this case the murderer uses a ceremonial cannon, which tells you how sure of himself this guy is. What Rumford does is he rigs the cannon with gunpowder so it shoots to kill the intended target as carefully planned.

Col. Rumford gets his man and then – as fate dictates – has to deal with a certain homicide Lieutenant who will try his best to unsettle the murderer. Except in this case the familiar unsettling never quite happens except for a few beads of sweat that are visible now and again on the Colonel’s brow. Rumford is all military all the time, meaning there is no emotion or weakness exposed for the Lt. to take advantage of. The Colonel rules with an iron hand, he is a commander in the strictest sense of the word and tries, as best he can, to ruffle Columbo’s feathers too. For instance, the Colonel makes comments on Columbo’s wardrobe and looks down his nose at the cigars the Lieutenant smokes, “would you like to try one of quality for a change?”  Well, I never! His sense of superiority can’t stop Columbo though. 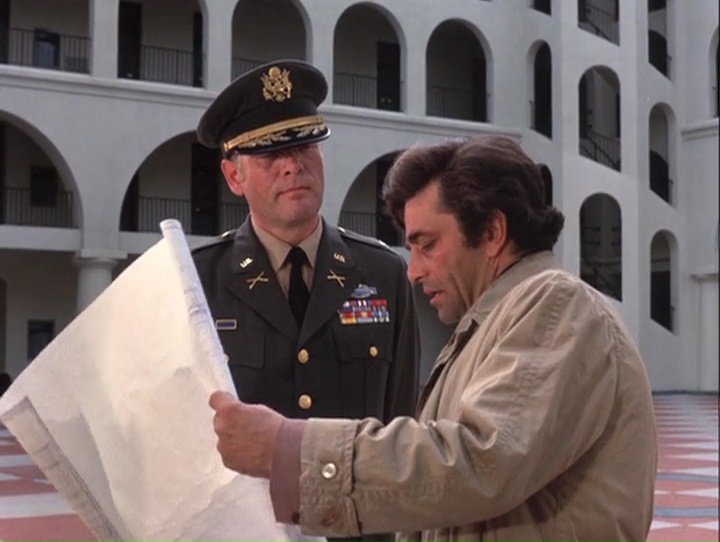 So…due to his years in the military Rumford is unlike many other murderers featured in Columbo. Instead of antagonizing the Lt. or losing his temper he tries to demean the veteran cop. As if Columbo would fall for any of it. What the Lt. does in usual form is negate the Colonel’s each and every attempt to better him with that certain “huh” act of his. I’ll say it over and over again, Columbo’s greatest strength as an investigator is his seemingly clueless persona, which never fails to force murderers to lower their guard and offer any and all assistance possible. It’s remarkable at every turn and it’s what usually sinks the guilty in the end. 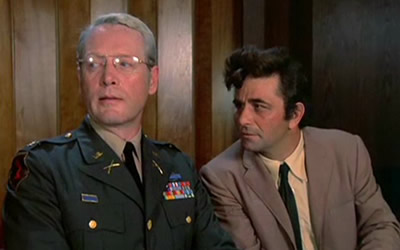 As far as the story depicted, “By Dawn’s Early Light” is not among my favorite episodes, but there’s a lot that’s memorable in it. I always mention “favorites” in these posts, but in all honesty it’s comparing great to great as there is ne’er a Columbo episode that I don’t enjoy. Anyway, the first standout in this particular episode is Patrick McGoohan’s presence as I mentioned at the opening. I’m not even going to call it his acting, although he’s very good in the episode and won an Emmy for his performance to prove it. For me the brilliance here is that McGoohan is perfectly cast as a commanding tyrant with his extraordinary, booming voice and powerful energy. The contrast between his character and Peter Falk as our beloved Columbo is stark and enjoyable to watch in every scene in which the two share the screen.

“By Dawn’s Early Light” has a great script and many outstanding scenes where no music is used to heighten the tension – a la Hitchcock. And, it also has a terrific “gotcha,” which to me has always been one of the best parts of watching Columbo, given we know who the murderers are right off the bat.  Waiting to see exactly how the Lt. will make the murderer cringe is sheer ecstasy. In this case, Columbo sets the stage as a full-blown spectacle by gathering all the cadets at the scene of the crime, by the ceremonial cannon. As Rumford tries to explain the details of the night in question saying he was asleep when the killing happened, the Lt. lets him have it with military precision, “not a minute earlier, not a minute later.”  TAKE THAT COLONEL!  Louder than a cannon’s blast Rumford is diminished. It’s wonderful stuff! 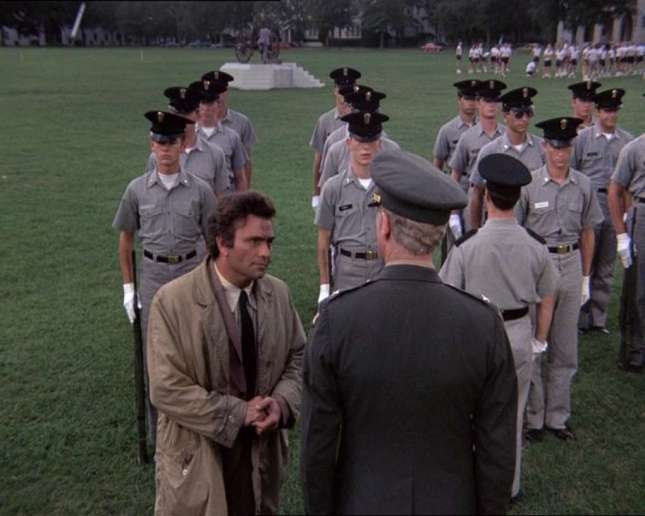 Now to my favorite part of “By the Dawn’s early Light” – Columbo himself (what a surprise). Our Lt. is a complete mess and I’ve never loved him more. Columbo’s hair is uncombed for most of the episode, with several scenes featuring Columbo bed hair. His raincoat is also particularly wrinkled here. I assume the idea for the efforts put into Columbo’s extra disheveled look in the episode is intended to pose an even greater contrast between him and the site of his investigation in this case, a military academy and all its pristine players. As powerful as it may be, however, military order is no match for the seemingly disorganized Columbo, who even goes a couple of days without showering during this investigation. It’s those kinds of details that remind us of the extraordinary symbiotic relationship between Peter Falk and Columbo, how inherent the role was in him and he in it. And of course, this type of thing is also what makes Columbo one the greatest characters in TV history. 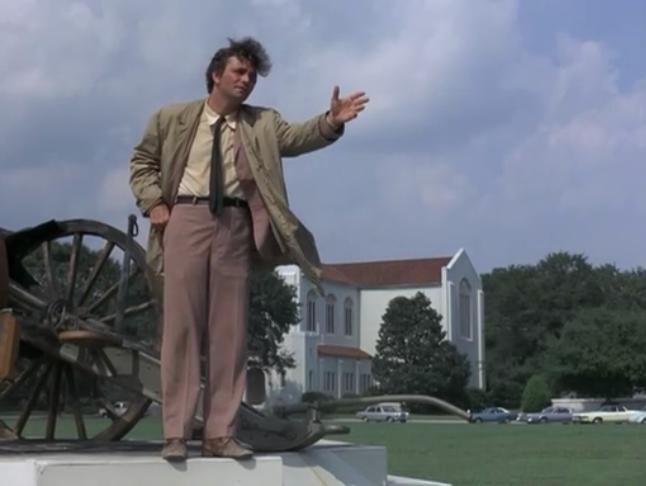 One more thing… in this episode we get a peek at Columbo’s notes, which shows a bit of drawing talent.

I hope you take the time to watch “By Dawn’s Early Light.” Aside from everything I’ve noted I think you’ll enjoy the great McGoohan’s Irish accent slipping in now and again throughout the episode. He was a wonderful actor and this is a great episode with which to remember him. That goes double for this guy… 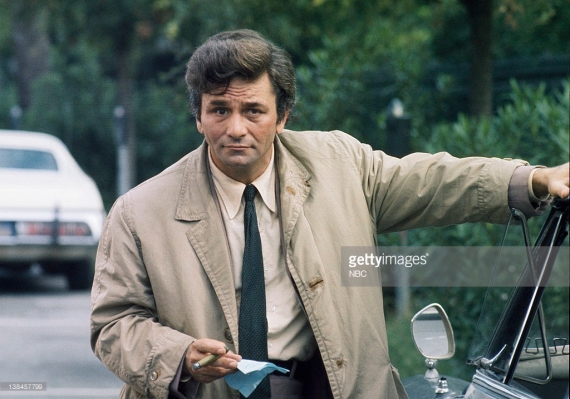