In July of 2012 TCM teamed with Fathom Events to present a one-day-only screening of Stanley Donen / Gene Kelly‘s Singin’ in the Rain (1952) to celebrate the film’s 60th anniversary. I went to that screening excited about seeing a classic movie on the big screen, but not necessarily excited about this particular movie. I hadn’t seen the film in years and never considered it a favorite among the MGM musicals I love. However, when I left the theater that day I was all but floating thanks to the absolute joy that leapt off the screen for approximately 103 minutes. 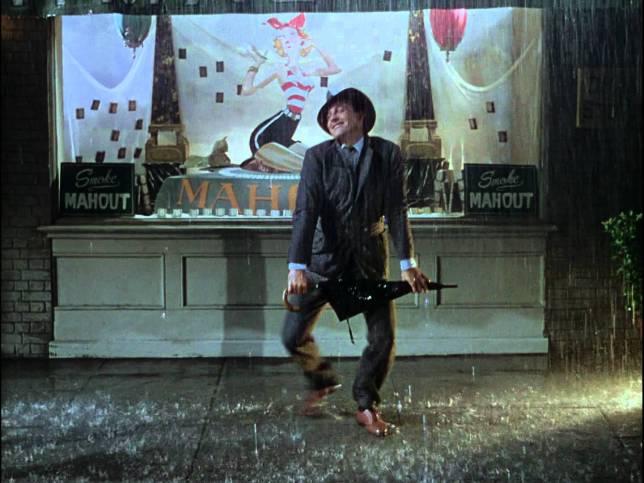 I’ve watched Singin’ in the Rain many times in the last five years and yet I couldn’t wait for today’s big screen presentation – again sponsored by TCM and Fathom Events – now celebrating the movie’s 65th anniversary.

This 65th anniversary screening is dedicated to Debbie Reynolds who passed away recently at the age of 84. Ms. Reynolds is in the movie what she was in real life, a talented breath of fresh air, perfectly cast to play an ingénue whose talent matches the likes of Gene Kelly and Donald O’Connor. We miss her terribly and will for a long time.

If you’ve never seen Singin’ in the Rain now is the time to remedy it. The movie is about the film industry during the terribly scary time when silents transitioned to talkies. The story is told with exuberance resulting in one of the greatest movies ever made by the greatest studio at its pinnacle. The costumes are glorious. The laughs are hearty. The music, THE DANCING – all superb – only more so on the big screen. The cast is extraordinary – Kelly, O’Connor, Reynolds and Jean Hagen who is the standout among standouts. Hagen’s is a priceless performance for which she should have taken home the Oscar. I’ve said it before and now I say it again.

Today’s small, but appreciative audience at the local multiplex was enthusiastic, laughing at all the right moments, clapping after each number and swooning when the time called for it. This movie geek was happy watching an essential, 65-year-old movie that hasn’t lost a step. The magic in the movie remains as does its dignity, always dignity.

There is a another round of screenings of Singin’ in the Rain scheduled for Wednesday and I must insist that you make the time to go see it with your entire family. 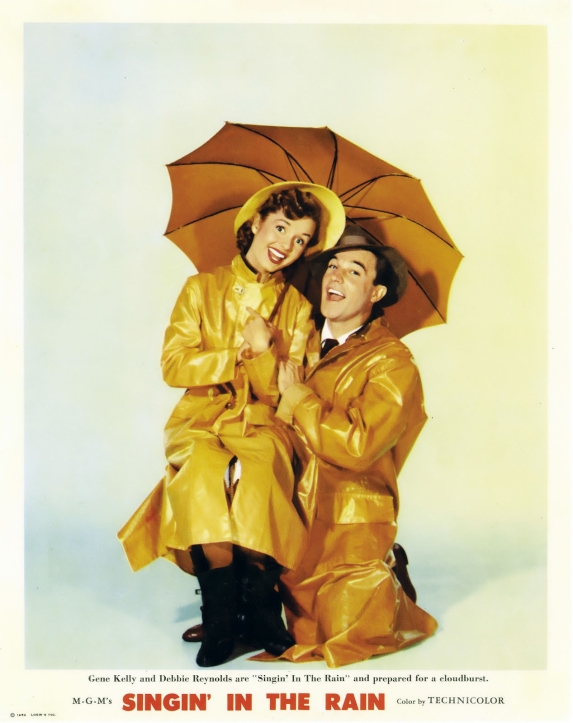 The #TCMBigScreen series presented by TCM and Fathom Events has a fantastic list of movies scheduled in 2017 to follow Singin’ in the Rain. Visit Classic Movie Hub for many chances to win tickets to the screenings throughout the year.

Singin’ in the Rain cost MGM about $2,540,800, more than half of which went to Walter Plunkett’s costumes.  And they are gorgeous to look at.  The MGM heads got over the film going over budget quickly as it was hugely successful, making over $7.7-
million profit upon its initial release.

The script for the Stanley Donen / Gene Kelly-directed, Singin’ in the Rain was written by Adolph Green and Betty Comden to accommodate the songs already completed, most of which the directors reused from earlier musicals. Interestingly, this film was the sixth time the song “Singin’ in the Rain” was used on the big screen. It was introduced in The Hollywood Revue of 1929 when it was sung by the MGM roster in front of a Noah’s Ark backdrop. A clip from that footage was later used in Babes in Arms. Jimmy Durante sang it briefly in Speak Easily. Durante was the first to add the often used “Doo Doo Doo Doo ” and “Ya Da Da Da”. Judy Garland sang it in Little Nellie Kelly. The song was also featured as an elaborate musical sequence performed by William Bendix and cast in The Babe Ruth Story. (IMDB) It’s common knowledge that “recycling” of material, props, scenery, what-have-you was the regular practice during the studio years in Hollywood and anyone familiar with classic musicals would recognize the songs in Singin’ in the Rain from earlier films.  But they are still magical here, perfectly woven together to support the entertaining story.