I saw Frank Lloyd‘s Children of Divorce for the first time in Rome, NY when I attended this year’s Capitolfest. Of the many films featuring Gary Cooper screened that weekend, Children of Divorce was one of my favorites. So I was thrilled when Flicker Alley announced that its 50th release would be a world premiere restoration of this movie on a Blu-Ray/DVD combo. And it doesn’t disappoint. 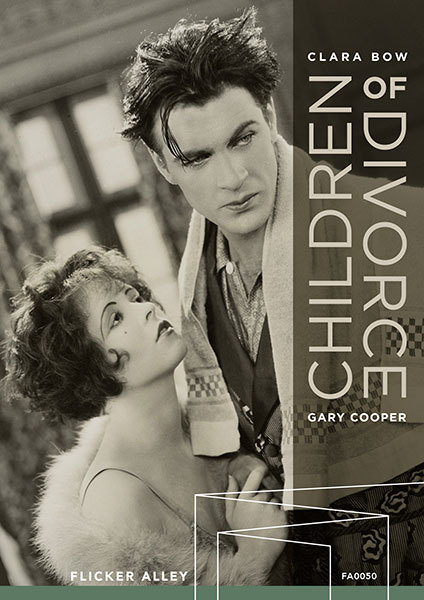 Children of Divorce tells the story of three childhood friends – all children of divorce – who get caught up in a love triangle as adults. Kitty (Clara Bow) was raised by a five-time divorcee (Hedda Hopper) who ingrained in her daughter the notion that the only way to get ahead in life is by marrying rich. Jean (Esther Ralston) manages to hold dear what really matters in life. She longs for a marriage based on love and values that will last. And Teddy (Gary Cooper) who lives a frivolous life where his every whim is granted, but still manages a sincere effort to change for true love.

Teddy and Jean fall in love and are serious about forging a life together, so serious in fact that Teddy actually gets a job for the first time in his life in order to prove himself to Jean. Their union is a certainty until party girl, Kitty tricks Teddy into marrying her during a night of drunken revelry – even though she is not in love with him and knows Teddy and her close friend, Jean love each other.

Time passes and unhappiness only grows for the three whose friendship survives even betrayal. But an important life lesson is learned far too late by Kitty. It’s love, not money, that makes life worth living.

Children of Divorce is a well-realized, elegant drama, which offers more than one meaningful social message and terrific performances. Although, I warn, you may be distracted by a young Gary Cooper who is simply stunning. Esther Ralston is quite good as Jean, but it’s Clara Bow’s performance that’s particularly memorable. Bow brings dramatic chops to compliment her usual exuberance in this one. Plus she’s dressed in gorgeous Travis Banton designs.

Children of Divorce is also shot beautifully. There’s one particular sequence toward the end of the movie that takes my breath away where Kitty is walking through doors toward her bedroom and the camera pans back slowly adding to the determination of a life-altering decision (no spoilers).

Flicker Alley has a lot to celebrate. Not only did it choose to present the little-known Children of Divorce, which has never been available on home video before, as its 50th title, but it does so with style. I urge you to visit the Flicker Alley site for details about the restoration, which was labor-intensive. As a fan I can tell you it was all worth it because the movie looks amazing. There are a few moments in the film where some damage is apparent, but it doesn’t distract. Instead, these serve as reminds of how important it is to save these movies before they’re lost forever.

The Children of Divorce dual format, deluxe edition includes the Clara Bow: Discovering the ‘It’ Girl documentary, which is quite moving. Plus you get a souvenir booklet wherein you can read about the terrific new score by Mont Alto Motion Picture Orchestra – among other details about the release.

This is now a valued member of my movie collection. It’s exquisite.

PS – you might want to visit Classic Movie Hub for a chance to win a copy of this Children of Divorce deluxe set.