In the mood for a good thriller?  If so you may want to take a look at any of these underrated beauts that are sure to get you to that uncomfortable, heart-pounding movie place so many of us love.

Getting right to it – 5 underrated thrillers… 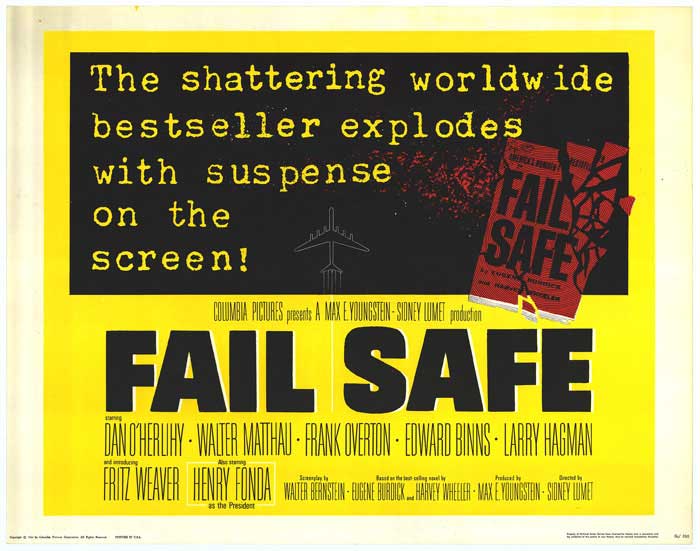 I start and end this list with Sidney Lumet films because…well, I love his work.  First I’m going with Fail Safe (1964) in which the director recreates the cinematic style we saw in his debut film, 12 Angry Men (1957) to bring us high drama on a personal scale.  The story in Fail Safe is both personal and grand – up close and broad – and on both ends serves tension and thrills that linger. Fail Safe also happens to have one of the most memorable endings in filmdom – the scariest of possibilities hits you in the face.  Then it lingers.

Most Hitchcock fans have seen this movie, but I don’t think it gets the accolades it deserves as one of his masterpieces.

A handsome, charming, innocent man who is wrongly accused of a crime runs into a smart, beautiful blonde in a chase thriller that revolves around international espionage.  If this story sounds familiar it’s no wonder since it was told again and again by the same man, Alfred Hitchcock.  Except this one’s as good as the others and a must-see for thrills on a grand scale.  The cast, which includes Robert Donat and Madeleine Carroll is stellar and the story – a sexy, exciting tale – moves along in a flash.

Audrey Hepburn turns in a great performance as a young, blind woman terrorized by thugs who are after drugs believed to be stashed in her apartment. Wait Until Dark never fails to get my heart racing although I know exactly what’s going to happen and when.  There’s one particular scene that gets me out of my seat!

Aside from Ms. Hepburn you have Richard Crenna, Alan Arkin, Efrem Zimbalist, Jr., Jack Weston and terrific photography by Charles Lang in this highly effective thriller directed by Terence Young.

I’ve seen this too many times to count and it may well be a strange choice, but I never hear anything about it so it made my list. Jagged Edge stars Jeff Bridges, Glenn Close, Peter Cayote, Robert Loggia and a host of other terrific actors.  What you have here is a cat and mouse game and a sexy thriller that plays as much with the emotions of the audience as it does with those of Glenn Close, the defense attorney defending a man (Bridges) accused of brutally murdering his wife. Suffice it to say we’re thrown for a loop throughout until the very end of the movie. Jagged Edge is highly enjoyable and I can’t wait to take a look at it again.

This is a misunderstood film.  I almost feel sorry for it, but it so startles me, so affects me at each viewing that I’ve no choice but to list it here.

Before the Devil Knows You’re Dead stars Philip Seymour Hoffman, Ethan Hawke, Marisa Tomei and features Albert Finney in a key, supporting role.  The story is told through parallel individual tales of each of the main characters leading up to, and looking back on, the film’s fateful event and scathing aftermath.

Hoffman and Hawk play brothers, Andy and Hank, respectively.  Perhaps an odd pair to view as brothers at first glance, but there is never a question of their bond once we get a glimpse into their lives and history.  For very different reasons both men are in dire need of cash.  Andy, the older, stronger and wiser brother, who is also much higher on the economic scale, comes up with the brilliant solution to their cash woes – they should rob a small jewelry store, which he calls a “victimless crime” since the owners would be well recompensed by the insurance on the store.  But, it is not just any jewelry store he plans on robbing.  What makes it “special” is for you to find out in this gripping, deeply emotional thriller.

The key word here is “underrated.”  Let me know which thrillers you think don’t get much attention, but are worth a viewing.  I’d enjoy the recommendations.

Follow Once upon a screen… on WordPress.com
Join 61,839 other followers