The coyote (Canis latrans) is a mammal native to North and Central America.  Primarily a carnivore, the coyote belongs to the canid family, which encompasses such mammals as domestic dogs, foxes and jackals.  The mammal most closely associated with the coyote, however, is the gray wolf.  Coyotes are recognized as social animals known to join forces with fellow coyotes to bring down large prey although not to the extent of the wolf, which lives its entire life in a pack.  The coyote can be versatile in its choice of food to include plants.  Important to the coyote’s survival are its sense of smell, hearing and sight, which are all used for successful hunting.

Now that you know the basics about the average coyote thanks to Wikipedia forget them.  The subject of this post is not your run of the mill coyote, but rather a hybrid born in 1949 at Warner Bros. Studios.  While the average coyote goes by one Latin name (noted above) our subject has many like Carnivorous Vulgaris, Eatibus Anythingus and Poultrius Devourius.  In addition, this coyote is not social, he is not versatile in his choice of food and doesn’t use any of what one would deem are a coyote’s natural talents for survival.  Instead this coyote uses all manner of gadgets to try to catch his only intended prey with unequaled persistence. Add to that the fact that he’s also a genius.  These are the reasons why Wile E. Coyote is my choice of villain for The Great Villains Blogathon 2016 hosted by Silver Screenings, Speakeasy and Shadows and Satin. I chose Wile E. Coyote as my villain this year mostly because he makes me laugh, but also because he’s a standout among predators.  The instinct for survival make many natural predators somewhat sympathetic, but in the oft absurd world of cartoons where natural laws mean little we have here a sympathetic villain by design.  A couple of years ago I visited the Museum of the Moving Image and an exhibit dedicated to animation extraordinaire, Chuck Jones, who created Wile E. Coyote.  The exhibit, What’s Up Doc? The Animation Art of Chuck Jones is currently at the Smithsonian and may make its way to a local museum near you.  I highly recommend a visit.  Noted in the part of the exhibit dedicated to the Road Runner and Wile E. Coyote are the rules that Chuck Jones said were strictly adhered to in every single entry featuring these two characters.  The final rule dictates that “the audience’s sympathy must remain with the Coyote,” which is brilliant and the reason why we can watch these cartoons over and over again.  Here is a villain we root for in two ways: that he should never succeed and that perhaps one day he might.

If you’re a fan of the Looney Tunes and Merrie Melodies cartoons in which Wile E. Coyote co-stars with the Road Runner, his arch-enemy and prey, you know the basic premise, which is repeated over and over again.  In this case the prey continuously gets the better of the predator leaving us to feel a bit sorry for the latter at times.  Also stipulated by Jones in his rules is that Wile E. is always more humiliated than harmed by his failures just as the universe should always work against him.  As an example of these two rules working together in many of these cartoons consider how many times gravity works against Wile E., but not before he pauses, looks at us and realizes he’s about to fall thousands of feet to the ground or right before he realizes he’s caught in the explosion he’d intended to blow the Road Runner to smithereens. 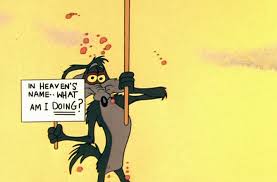 Wile E. Coyote preceded the Road Runner in media by almost a decade.  His first appearance was in the Looney Tunes & Merrie Melodies #91 Comic Book in May 1949 where his name appears as Kelsey Coyote.  Thank goodness it was changed to Wile E.  As far as I could determine the Road Runner made his debut in the theatrical cartoon the two made together in 1949, “Fast and Furry-ous” directed by Chuck Jones, which began a series of theatrical shorts and later direct-to-television cartoons. 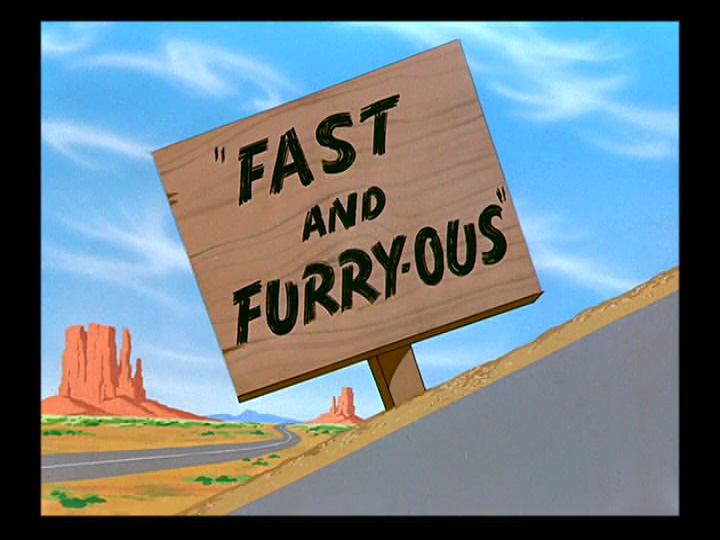 Chuck Jones based Wile E. Coyote on Samuel Clemens’ (aka Mark Twain’s) book “Roughing It” in which the coyote is described as a “living, breathing allegory of the desire to want.  He’s always hungry.”  As I read that, by the way, it occurred to me that Wile E. Coyote is actually a poster boy for six of the seven deadly sins.  I’d exclude sloth, but the others – Pride, Envy, Wrath, Greed, Lust and Gluttony (although he actually never gets to eat anything) – are present in every episode.  Chuck Jones later said he created the Coyote/Road Runner series to parody traditional “Cat-and-mouse” cartoons and that’s the basic premise of every single entry.  The fact that the duo and the cartoons became so popular given the same premise is repeated with the same results over and over again is testament to Jones’ genius and the wonder produced by the Warner Bros. animation department. 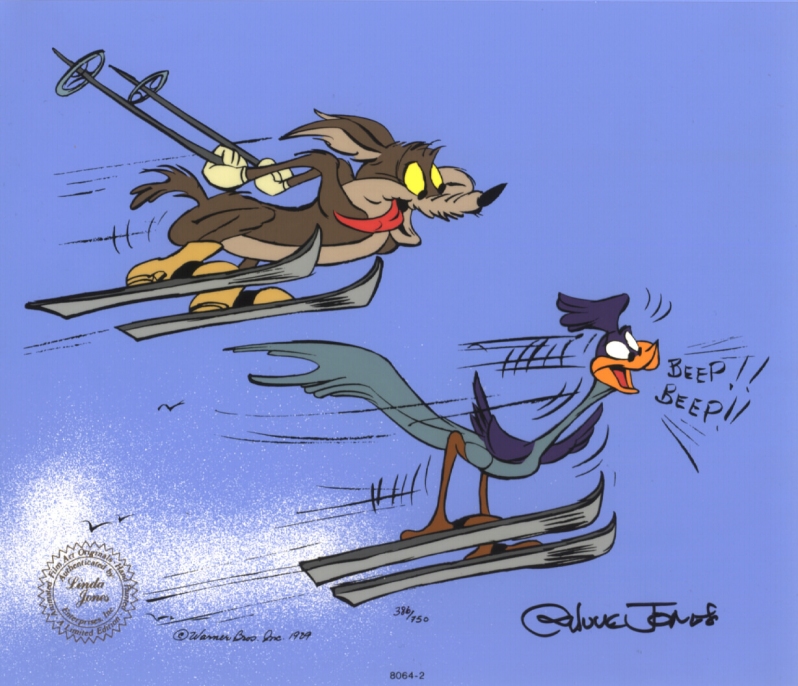 Before I get to the details of our villainous star I should note that Wile E. Coyote whose name is an obvious pun on “wily” appeared sans the Road Runner in five cartoons opposite Bugs Bunny from 1952 to 1963.  In these Wile E. tries to outsmart and eat the rabbit, rather than the bird so his behavior stayed constant, but while Wile does not speak in his outings with the Road Runner (another of Jones’ rules) he does so in the Bugs Bunny shorts and it’s hilarious to hear him speak with a refined English accent.  The great Mel Blanc voiced all of the sounds made by Wile E. Coyote from 1949 to 1989, by the way.  In any case, while seemingly more sophisticated in the Bugs cartoons the outcome for the always hungry coyote is the same.  If you’ve the time take a look at “Operation: Rabbit” the first of the Bugs/Wile pairings.

What makes Wile E. Coyote a memorable villain is not the fact that he wants to eat the Road Runner.  I think we’d all agree that nature is all about predators and prey and that whole circle of life thing is to be supported.  What makes him a villain is that he wants to eat this particular Road Runner in perpetuity.  Wile E. Coyote is like the Harry Powell of cartoon characters if the latter had never run into Rachel Cooper in Charles Laughton’s The Night of the Hunter (1955).  Powell would have chased those children forever and ever if it came to that.  Although Wile E. is a lot less scary than Harry Powell he never gives up either.  Add Obsessive-Compulsive Disorder to his truckload of misgivings.  Wile E.’s obsession coupled with his genius is what brings this character to another level – evil genius, which makes for great entertainment.  Coyote’s schemes to capture the Road Runner cannot be categorized as fly-by-night stalking to fill a hole in his belly.  His are carefully planned, elaborate plots that should yield him the bounty. 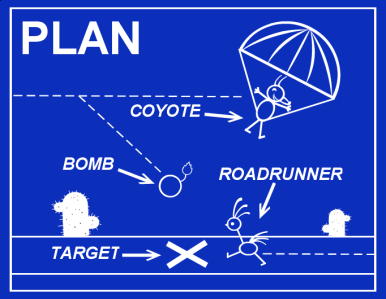 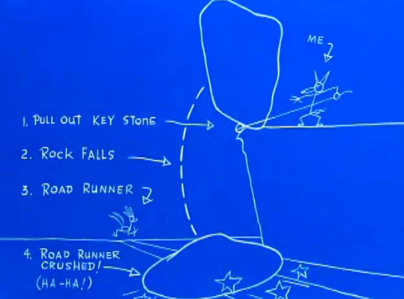 Why then does Wile E. Coyote always fail?  Well, because Chuck Jones stipulated that “the Coyote is never allowed to capture or eat the Road Runner.”  That’s sort of evil in its own right, isn’t it?  It’s also genius.  We still wonder, however, whether the trouble lies with the operator or with the contraptions Wile E. gets courtesy of ACME Inc.’s mail order catalog, which is always at hand.  Although sometimes it’s easy to determine his error.  Like the time he swallowed an entire bottle of earthquake pills because he thought they were ineffective.  Available through this company which acronym may or may not stand for American Company (that) Makes Everything includes do-it-yourself tornado Kits, high-powered roller skates, refrigerators, jet-propelled tennis shoes, huge collections of explosives, suction cups, sling shots of all sizes and so forth.  Anything you can imagine including super hero costumes are available through ACME, made possible thanks to another of Jones’ rules. 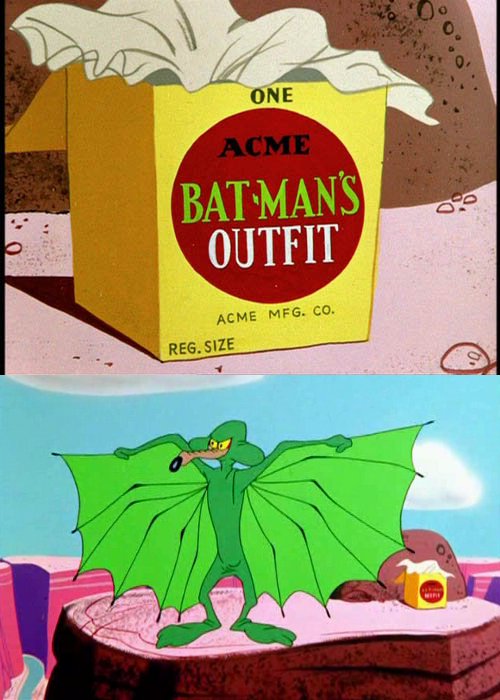 Aside from tools Wile E. uses from his environment such as boulders all of his contraptions must be obtained from ACME. 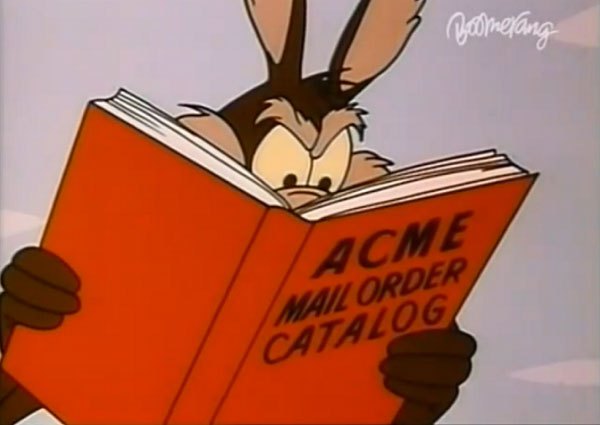 While we marvel at the vast array of products the Coyote gets his hands on these ACME products do him little good.  He never catches his prey and usually ends up the victim of his own schemes.  Boulders in these cartoons tend to fall backward a lot. 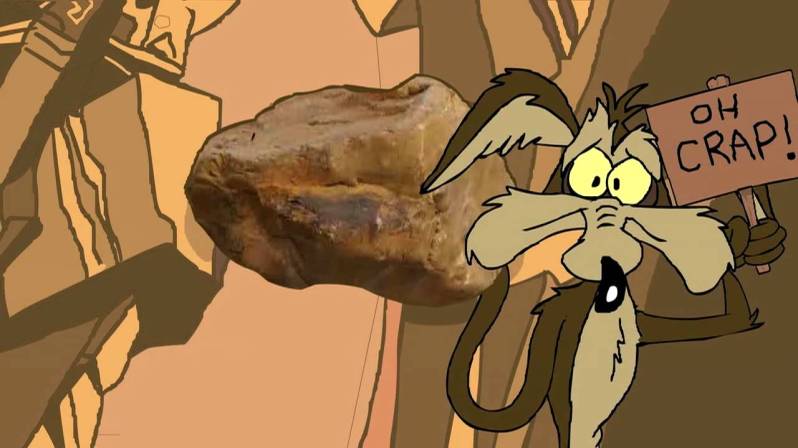 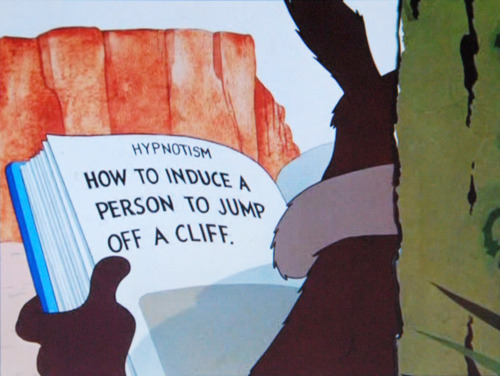 Put aside wondering how Wile E. Coyote does it all.  Evil is as evil does and life in cartoons finds a way.  Accept only the fact that he is a villain that keeps on giving.  While Wile E. Coyote and the Road Runner may not have been the first to be featured in chase scenes in cartoons – just ask Bugs who claimed he and Elmer Fudd were the first – this pair perfected the idea.  No character falls off a cliff with such style as does Wile E. and we know that with knife and fork at the ready he will chase the Road Runner for all of eternity and will fail miserably at every attempt.

His tenacity is legendary, his resourcefulness to be admired and his failures, which don’t detract from his evil intentions, are constant sources of entertainment.  A rather benign villain perhaps, but this is dedicated to the evil genius of Wile E. Coyote aka Nemesis Ridiculii who stands among the great villains of all time.  Forever and ever.

Be sure to visit The Great Villains Blogathon 2016 hosted by Silver Screenings, Speakeasy and Shadows and Satin for insights on the evil that lurks on the silver screen. 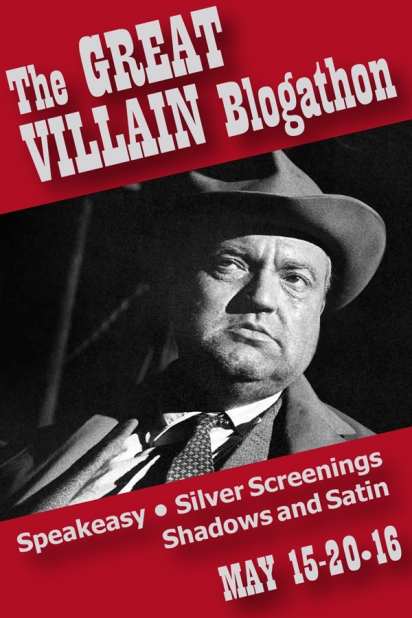