For Leonard Nimoy‘s birth anniversary I remember one of my favorite “Columbo” episodes,  “A Stitch in Crime” directed by Hy Averback from 1973, the series’ second season. “A Stitch in Crime” is – not surprisingly – a fan favorite as it features memorable guest stars, fabulous music, a compelling story and several standout scenes with the Lieutenant and one of his most admirable – and evil – adversaries.

Episode Summary: Dr. Barry Mayfield (Nimoy) is a brilliant young heart surgeon on the staff of a major Los Angeles hospital. He and the hospital’s senior heart specialist, the revered Dr. Edmund Hidemann (Will Geer), are working on a drug that will combat transplant rejection. Veteran nurse Sharon Martin (Anne Francis) believes that Mayfield is a cold opportunist who would like to take all the credit for the research project. She doesn’t know how right she is.

I won’t get into all of the details of the murdered, but as you know by now the primary guest star and murderer is the dashing Leonard Nimoy who as Dr. Barry Mayfield can be listed among the most sinister of all “Columbo” villains.  Mayfield is brilliant, power and accolades hungry and plans for one of the most unusual ways to get rid of those who stand in the way of his achieving fame and fortune as the top surgeon in his field.  In fact, had Dr. Mayfield not run into Lt. Columbo he may well have gotten away with murder.  But that wasn’t to be.

Leonard Nimoy plays the sinister Mayfield with flair and the scenes between him and the Lt. are all worthy of repeated viewings.  As much as I love Leonard Nimoy it’s always jarring to realize how much I hate him in this role.  Of course that means he’s tops as a villain and makes for as worthy an adversary to Columbo as any other. 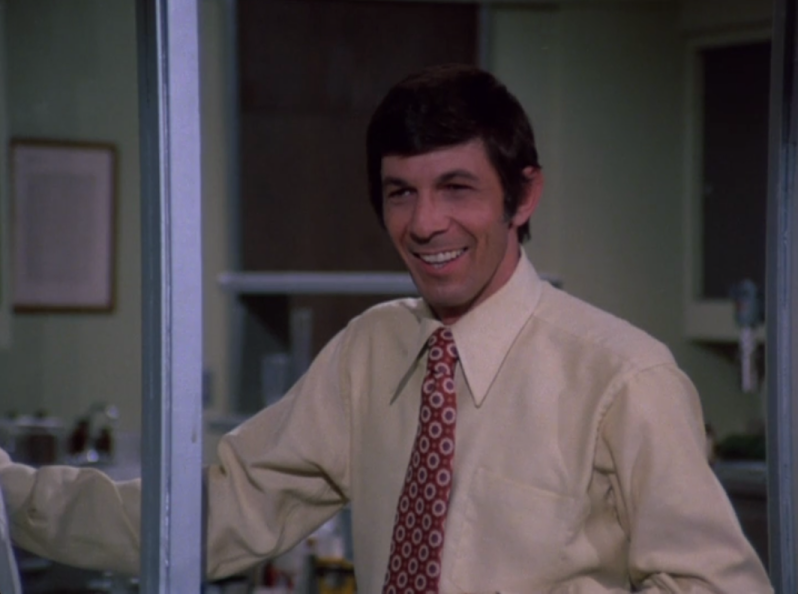 Now to our Lieutenant – from the moment Lt. Columbo (the fabulous Peter Falk of course) appears in this episode in one of his most memorable entrances – yawning, a disheveled mess, desperate for coffee and holding on to his breakfast, a hard-boiled egg, which he cracks on the murder weapon – we know we’re in for a ride. There’s no need to get into why Columbo is one of the greatest characters to ever appear on television. Peter Falk’s communion with the brilliant, if seemingly confused murder cop, is the stuff of legend. This is the show and character that broke the mold. 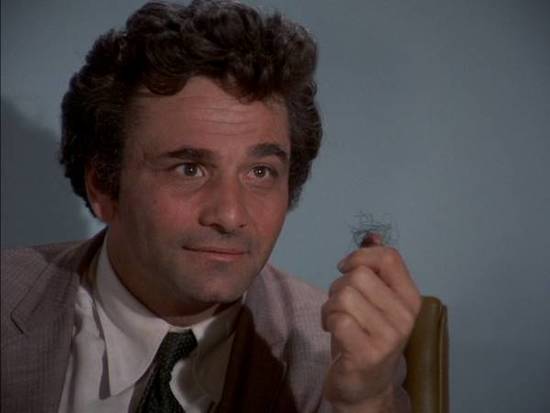 “A Stitch in Crime” has many memorable scenes.  My favorites include a moment where we see our stalwart Lieutenant a bit green about the gills during a medical procedure.

“Uh, I faint. I mean, I actually pass out, and in my line of work that’s kind of embarrassing.”

That scene during which the Lt. seems to be losing his cool serves as one of those unique Columbo secret weapons – a detective who can’t handle blood, which from the murderer’s perspective shows a chink in the armor of the cop.  But we know the truth.  Little, if anything, would get in the way of Columbo’s goal.  Another reason why “A Stitch in Crime” is a must see is that the episode features one of the few scenes in which the normally cool Lieutenant loses his temper with a suspect. It’s quite startling to watch for anyone used to his usual MO, which usually takes the guise of the confused, empathetic investigator.  Columbo losing his cool is – again – testament to Nimoy’s performance as the villain.  He’s as cold as they come.

Highly recommended “A Stitch in Crime” is on my list of favorite “Columbo” episodes, one I’d recommend to those new to the series because it has all of the elements that matter with regards to why this series is so special in the annals of Television.  Add to that the fact that two of Television’s most memorable actors battle.  This should not be missed.