In Paris at Midnight is where I want to be…

Woody Allen has made over 40 films and despite his having received many writing and directing nominations for his better known vehicles I turn to his 2011 gem, Midnight in Paris for a bit of inspiration. I first watched the film when it was recognized by the Academy with four Oscar nominations for Best Picture, Best Director, Art Direction and Best Writing, Original Screenplay. Allen took home the writing honors although, needless to say, he was not present at the ceremony. Incidentally, the film’s four nominations made it the most Oscar-nominated Woody Allen film since Bullets Over Broadway (1994), which received seven Oscar nominations. Allen’s win for Screenplay was his fourth and the first he had won since Hannah and Her Sisters 25 years earlier.

Still, Midnight in Paris feels like a small film, one I love because it’s glorious to look at, enchanting to listen to – a romance to remember. Like so many love letters the writer/director has sent to New York in previous films, this is one to Paris. 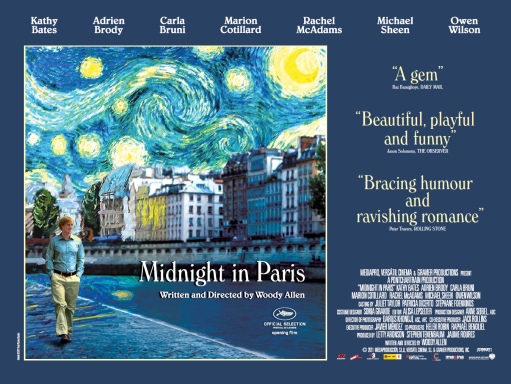 I’ve found, through the years, that Woody Allen is either greatly admired or greatly disliked as a filmmaker. I am happy to say I fall into the first category. I get and am deeply affected by his films and Midnight in Paris is no exception. It gets me from its opening montage, which is reminiscent of the montage that opens his 1979 film, Manhattan. In that earlier film, Allen’s voice speaks over the music stating, “He loved New York…he romanticized it all out of proportion.” Allen does the same for Paris with this outing. I sighed at that wonderful music in its opening, while images of Paris roll by – a sigh that lasted approximately 94 minutes.

Included as standard operating procedure for these types of write-ups is the actual plot of a film.  Honestly, I don’t feel like reiterating the actual story. Watch the film. I will tell you what Midnight in Paris is about, however – it’s about writing, it’s about art, it’s about writing as art and the subjectivity of those. Ensconced in a surreal tapestry, both visceral and through time, Allen takes his audience on a romantic journey. The glory of Paris remains constant as the main character in this story and her energy is palpable. I’ll venture to say all others, the people in this story, are incidental. Although the cast, a large one, is worthy of note – Owen Wilson in (by far) the best role he has ever played, Rachel McAdams, Kurt Fuller, Mimi Kennedy, Michael Sheen, the wonderful Marion Cotillard and many other notables in smaller roles playing some of the greatest figures in literature and art – Ernest Hemingway, Cole Porter, F. Scott Fitzgerald, Gertrude Stein, Pablo Picasso, Salvador Dali, T. S. Eliot, Paul Gauguin and Edgar Degas, among others. They are all part of a wonderful fantasy where eras collide – the Paris of today and the Paris of the 1920s.  It’s truly wonderful stuff. And only because this is so riddled with nostalgia does it make it to this blog. 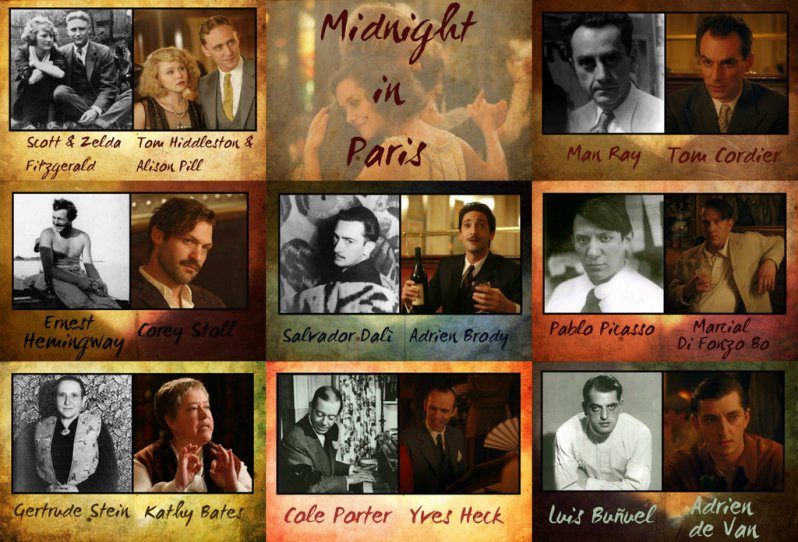 Despite the many things that make Midnight in Paris a standout, it is in many ways typical Woody Allen for more reasons that what I noted above. In style and theme, the film doesn’t stray far from many of Allen’s past glories. Miraculously, Midnight is also fresh and new. Allen is made up of a very special kind of genius and remains a wonder of American cinema. He had the idea to make a film in Paris. This gem is what he comes up with. He probably scribbled a simple “Paris” on a small scrap of paper years ago and this is what we get – a film to build your dreams on. Midnight in Paris considers golden ages as subjective ideas depending on the era lived. In Paris at midnight is where I want to be.