Once Upon a Screen is honored to host the inaugural entry for this year’s 31 Days of Oscar Blogathon with tributes to THE ACTORS! 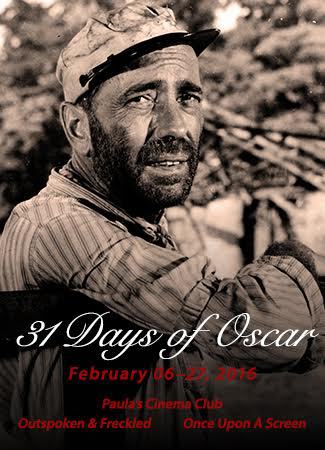 To review the complete roster and topic details for the 2016 31 Days of Oscar Blogathon be sure to visit the original announcement.  There is a lot to look forward to as the 31 Days heat up so stay tuned to Outspoken & Freckled, Paula’s Cinema Club as well as this blog as we commemorate bloggers who honor Oscar through the years.  And since this event was inspired by TCM’s 31 Days of Oscar festival I must insist you tune in and watch Oscar-winning movies scheduled by actor connections through March 2nd.

– we’re starting this year’s event with a short list of distinction so I’ll get right to it.

The nominees for Best Submission by a Blogger dedicated to THE ACTORS! are…

Old Hollywood Films with a delicious look at the 1941 Oscars: Best Actor nominees.  If you know who was listed on that ballot then you know why I say “delicious.”

Once Upon a Screen discusses the contest leading to the Best Actress of 1950, A Race to Remember

The Wonderful World of Cinema considers Anne Bancroft, Winner for THE MIRACLE WORKER (1962)

Many thanks to all who took the time to submit an entry!!  This is short, but sweet!

NEXT UP is SNUBS with Kellee picking up the hosting reigns.

Random words of thanks for Oscar…

“I sincerely hope I shall always be a credit to my race and to the motion picture industry.  My heart is too full to tell you just how I feel.” – Hattie McDaniel accepting her Best Supporting Actress Oscar for GONE WITH THE WIND (1939)

“You’re only two years older than me, darling. Where have you been all my life?” – Christopher Plummer to Oscar accepting his Best Supporting Actor award for BEGINNERS (2010)

“I know you Americans are famous for your hospitality, but this is really ridiculous.” – Julie Andrews accepting her Best Actress Oscar for MARY POPPINS (1964)

“It’s a long way from the heart of the Belgian Congo to the stage of the Pantages Theatre.” Humphrey Bogart accepting his Best Actor Oscar for THE AFRICAN QUEEN (1951)

“I can’t tell ya how encouragin’ a thing like this is.” – Ruth Gordon accepting her Best Supporting Actress award for ROSEMARY’S BABY (1968)

“I don’t think ever in my life have so many people been directly responsible for me being so very, very glad.” – Marlon Brando accepting his Best Actor Oscar for ON THE WATERFRONT (1954)

“This might be the one time I’m speechless.” – Robin Williams accepting his Best Supporting Actor Oscar for GOOD WILL HUNTING (1997)

“Thank you very much. Two in a night is just too much! Thanks a lot.” – Harold Russell accepting the second Oscar of the night for his one, memorable performance in THE BEST YEARS OF OUR LIVES (1946)

“Wow. If I’d’ve have known that I would’ve put that patch on 35 years earlier.” – John Wayne accepting his Best Actor Oscar for TRUE GRIT (1969)