I don’t remember how or when I first came across “The Rifleman,” but I saw plenty of repeats of the show during my childhood.  I vividly remember being charmed by the unique Western with heart at its core and today I revisit it in honor of its star, Chuck Connors, who would have celebrated a birthday.

As a Western “The Rifleman” features characters and situations true to the genre, as well as what one would deem a typical 1880s frontier setting as depicted in many movies and so forth.  The action in the series is also along the lines of standard

Western fare – gunfights, lawlessness, etc. – all of which is entertaining.  But what makes “The Rifleman” a standout is the importance the show places on relationships, particularly the one between Lucas McCain aka The Rifleman and his son, Mark (Johnny Crawford).

Lucas McCain (Chuck Connors) is a widower struggling to raise his son amidst the backdrop of the Old West.  As a homesteader, McCain lives on a small farm outside the New Mexico town of North Fork, but for all intents and purposes he serves as the town’s moral center and takes every opportunity to teach his son about human nature and its complexities. As such themes of redemption, forgiveness, judgment, character, fairness, sorrow and joy are woven beautifully into each episode of “The Rifleman.” 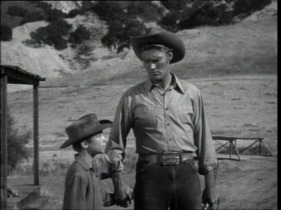 Lucas McCain: “Name callin’s a handy thing for some Mark. They smack a label on somebody or something and that’s it as far as they’re concerned. It’s kind of a special way of hating because they don’t take the trouble to understand.”
Mark McCain: “Well you have to put a label on some things, like say a pickle jar!”
Lucas McCain: “That’s right! But you be mighty sure there are pickles in that jar first! You see most times snap judgment can be cruel son.”

Lessons.  Many important lessons.  But that’s not to say that there isn’t more than enough action in “The Rifleman” to keep the most ardent fan of shoot-em-ups satisfied.  One needs only to see the show’s opening sequence – one of the best – to recognize why McCain is given the famous moniker.  Lucas McCain is an imposing figure to begin with Connor’s 6 ft 5 in. frame towering over everyone else in the show making the character’s physique match his strength of purpose.  This is a man who walks the proud walk of the righteous. Add to all of that the souped-up rifle he carries around and you have one of the most memorable Western characters in all of television.

Lucas McCain: “You want to try your fast gun against my fast rifle?”

If the bad guys have any brains at all the answer to that question would always be “HELL, NO!”  But bad guys are usually too self-centered, blinded by hatred or too power hungry to think clearly so The Rifleman is given ample opportunity to show his skill.  We – as in even those of us who are not gun aficionados – are always thrilled when he does.  I have to admit that McCain’s style – the firing the rifle from his hip, a position he gets into much faster than the (or my) eye can see – is always exciting.  But again, true to the moral fiber of the man, it is a skill used only as a last resort, when absolutely necessary – another unique attribute of “The Rifleman.”

Lucas McCain: “A man doesn’t run from a fight, Mark…but that doesn’t mean you should go running *to* one, either.”

The pilot episode of “The Rifleman” titled “The Sharpshooter” was written by Sam Peckinpah intended as an episode of “Gunsmoke,” but the entry never came to fruition for that program.  Instead, it ended up as an installment on CBS’ “Dick Powell’s Zane Grey Theater” in March 1958.  In September of that same year “The Sharpshooter” aired on ABC as the inaugural episode of “The Rifleman,” beginning the show’s five-year run on the network.

Another great thing about this series, which is actually what makes classic TV shows enjoyable in general are the top names in entertainment that were a part of its roster – either as guest stars, recurring characters and/or directors.  Names like Ida Lupino, Bud Boetticher, Arthur Hiller and Sam Peckinpah helmed the show throughout its run and a host of familiar faces guest starred.   The show’s two main players, Connors and Johnny Crawford as Mark are exceptional.  Connor’s McCain is one of TV’s greatest heroes and Crawford shows acting chops well beyond his years.  Also enjoyable to watch is Paul Fix who plays Micah Torrance, the Marshall and McCain’s best friend who depends on him consistently to help keep order in North Fork.

Lucas McCain: “Everything must be done according to the law.”

Those are just a few of the reasons why “The Rifleman” is likely to charm ya, ma’am.  So giddy up and mozy on down and…OK, I’m gonna stop now.