The behind-the-scenes stories that have emerged from the making of Jean Negulesco’s Titanic (1953) are nothing new.  She was the ultimate professional.  She was generous, warm and kind to everyone.  She was one of the biggest stars in the world. 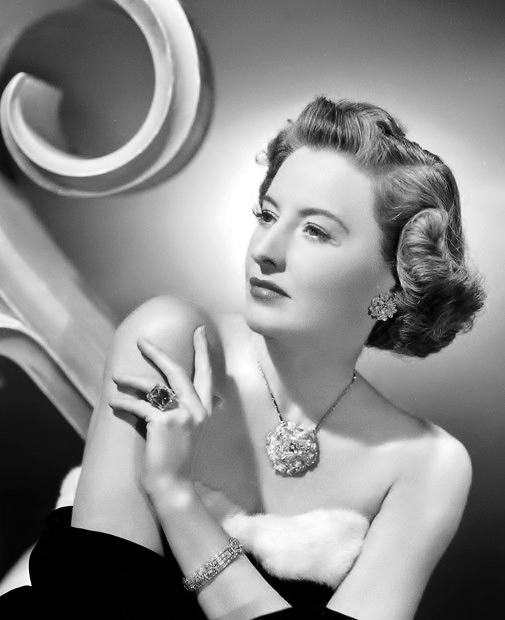 In Titanic Barbara Stanwyck plays Julia the American wife of Richard Ward Sturges, an upper crust British man played superbly by Clifton Webb, another major star at the time.  What’s interesting about the characterization of Stanwyck’s character is that they make it a point to emphasize how she’s from the wrong side of the tracks – Michigan – or at least as compared to his high-brow pedigree.  In other words both Stanwyck and Webb play to their strengths. 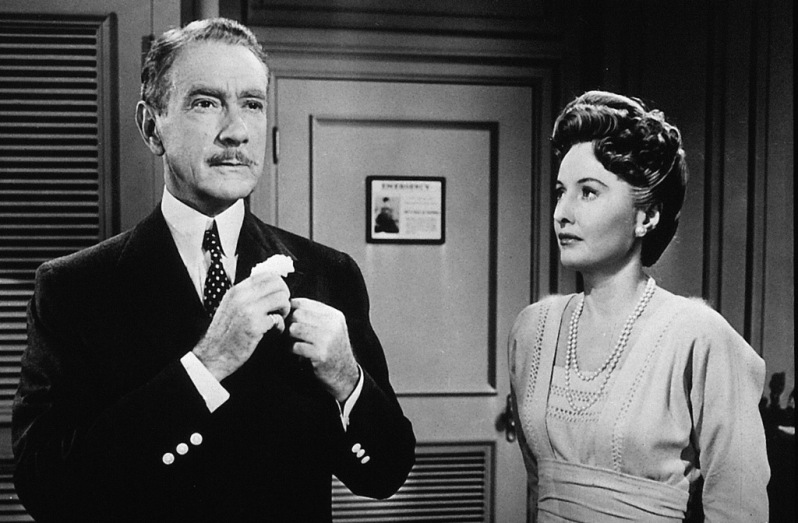 As this story goes Mrs. Sturges books passage on the Titanic to take her children, Annette and Norman (played by Audrey Dalton and Harper Carter respectively) back to Michigan in hopes that they can have a normal life without excessive privilege.  Her wish is that they grow up to be people of substance.  Her husband, however, is of that other world and therefore the root of the problem.  Mrs. Sturges books passage without her husband’s knowledge, but he finds out and boards the Titanic just as it’s about to set sail so that he can stop her and keep his children in Europe.

The drama of the Sturges family is fictional, but wonderfully written and executed.  Just as the differences between Julia and Richard seem insurmountable it becomes clear that what they face as a couple pales in comparison with the reality that all aboard the Titanic are faced with.  As happens in real life when tragedies happen true feelings often surface – sometimes too late though as is the case here.

In case you’re not familiar with the fate of the Titanic – SPOILER – it sinks.

The third lead in Titanic is played by Robert Wagner billed alongside Webb and Stanwyck despite the fact that he was still a relative newcomer to the movies.  Wagner plays Gifford Rogers, a young man who’s smitten with Annette Sturges, a love that blooms as other troubles are spotlighted.  Mr. Wagner does a nice job with this role and has always spoken highly of Titanic, his experiences during the making of the movie and about what a huge boost it was to his career.  Titanic also proved important to him on a personal level as it introduced him to Barbara Stanwyck with whom he’d enjoy an almost four-year affair the details of which he disclosed in his book, “Pieces of My Heart” and has since discussed in several interviews always speaking of Barbara with great affection.  As he describes it the relationship was one of “the best you could ever imagine” and says Barbara Stanwyck was the first woman he ever loved.  Ms. Stanwyck who was 45-years-old broke off the affair with the much younger Wagner knowing it would go nowhere due to the age difference and her stardom, both of which would no doubt hurt his career.

While I wouldn’t recommend this 1953 treatment of the Titanic story as the one to turn to for historical accuracy it’s not true that little attention was paid to history as many think.  Included in this story are several characters based on the real people who were on the Titanic. Peripheral characters from real life include Captain E. J. Smith (Brian Ahern), First Officer Murdoch (Barry Bernard), Benjamin Guggenheim (Camillo Guercio) and Jacob Astor and his 19-year-old bride, Madeleine (William Johnstone and Frances Bergen wife of Edgar and mother of Candice).  Also represented are Mr. and Mrs. Strauss, the older couple who refused to be separated.  The scene during which Mrs. Strauss refuses to get on the lifeboat is one of the most touching in the movie.  And then there’s the Mrs. J. J. “Unsinkable Molly” Brown character although the name was changed to Maude Young, portrayed by the great Thelma Ritter who brings her signature straightforward wisdom to the deck of the doomed ship.

Proof that the filmmakers intended to make as near a true depiction of the sinking of the Titanic as possible is in the prologue of the opening credits, which reads:

“All navigational details of the film— conversations, incidents and general data — are taken verbatim from the published reports of inquiries held in 1912 by the Congress of the United States and the British Board of Trade. ”

The problem with the facts available from the 1912 inquiries is that those records were from initial accounts, which were incomplete and spotty.  As discussed by historian Sylvia Stoddard in the commentary of the 2013 blu-ray release there simply were few records to be had in 1953.  It was only after Walter Lord did research for his 1955 book on which Roy Baker’s A Night to Remember (1958) is based that the truest depiction of the tragedy came to light.  According to Stoddard Baker’s film remains the best and most accurate of the cinematic treatments.  All that said, however, Negulesco’s movie played an important role in the Titanic timeline in the sense that thanks to it and megastars Stanwyck and Webb the tragedy was reborn in the public consciousness. Add to that the fact that this is a movie with substance best illustrated by the strict class structure it depicts, a structure that would play a role in the aftermath of the real tragedy.  Credit should also be given to all involved in the making of Titanic 1953 because it is an utterly moving picture with honest emotion.  Although the movie focuses primarily on the human drama between the Sturges’ it manages satisfying characterizations of many peripheral characters so that when the going gets tough we care about what happens to these people.  Finally, since comparisons are inevitable, not only did Negulesco deliver a memorable and emotionally affecting film, he did so in a fraction of the time it took James Cameron to tell a love story in his bloated remake several decades later.

Our Titanic won an Academy Award for Best Writing, Story and Screenplay (Charles Brackett, Walter Reisch, Richard L. Breen) and was nominated for Best Art Direction-Set Decoration, which I think it deserved, but the Academy chose Joseph L. Mankiewicz’s Julius Caesar instead.  It doesn’t matter in the long run because the sets along with the costumes, effects and acting are first rate and make for a movie worth watching.  I should note that Titanic also has an impressive cast aside from the major players already mentioned.  Notables include Richard Basehart who actually had the gumption to take a Voyage to the Bottom of the Sea after this experience, Allyn Joslyn in one of his last film roles before moving on to work primarily in television and you’ll hear the voice of Michael Rennie narrating the movie.  Since the cast is so large there are many uncredited roles by people whose faces you’ll no doubt recognize as well so check here for the complete cast list. 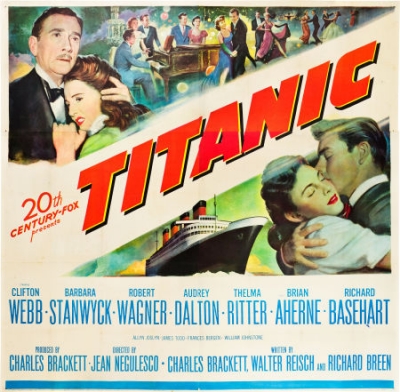 The filming of the Titanic disaster had a powerful effect on Barbara Stanwyck, who recalled:

“The night we were making the scene of the dying ship in the outdoor tank at Twentieth, it was bitter cold.  I was 47 feet up in the air in a lifeboat swinging on the davits.  The water below was agitated into a heavy rolling mass and it was thick with other lifeboats full of women and children.  I looked down and thought: If one of these ropes snaps now, it’s goodbye for you.  Then I looked up at the faces lined along the rail – those left behind to die with the ship.  I thought of the men and women who had been through this thing in our time.  We were recreating an actual tragedy and I burst into tears.  I shook with great racking sobs and couldn’t stop.”

I’ll end this post as I started it – with facts we’ve heard before.  Barbara Stanwyck delivers another stellar performance.  While Titanic may not stand among her greatest work it’s certainly a good production made better by her heart, her grit and her beauty.  The legend dependably balances a wide range of emotions staying true to both her acquired stature while we are reminded that her breeding doesn’t quite pass muster.  She is perfectly matched against Clifton Webb’s natural snootiness and looks gorgeous to boot. 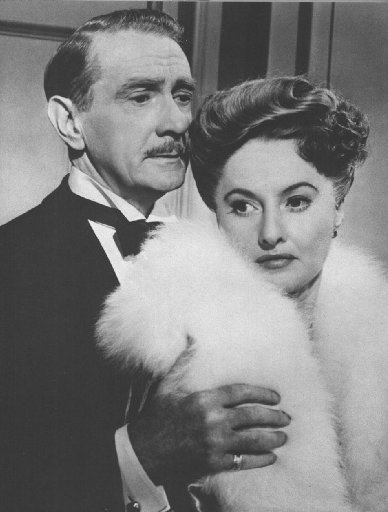 As most know the Brooklyn-born Stanwyck overcame a scrappy early life to become a major player in Hollywood.  She was the kind of woman with the kind of work ethic and drive that resulted in her working for almost all of the major studios (if not all) delivering memorable performances in almost every genre of film in every era of the Golden Age.  By the time Stanwyck appeared in Titanic she was a legend, but still had the drive of an ingenue – a drive that would ensure she was a viable player in the industry for years to come.  When film roles dried up Stanwyck turned to television and made her mark there.  She remains – for reasons on- and off-camera – one of the most admired figures in Hollywood history and watching her in movies is ever fascinating.  The Titanic Stanwyck is no exception.

Barbara Stanwyck passed away on January 20, 1990.  I post this in her memory and as part of the Remembering Barbara Stanwyck Blogathon.  Be sure to visit the host site for more on the legendary actress. 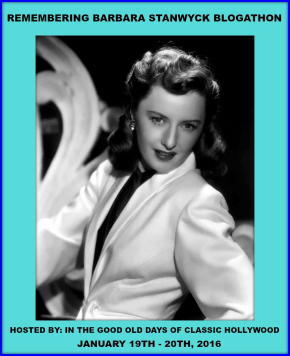