It’s almost impossible to read about or discuss Alfred Hitchcock‘s body of work without the topic of the “Hitchcock Blonde” being mentioned.  That is, the cool, oft aloof, sexy, stylish female protagonist the master of suspense was partial to, a character as central to making Hitchcock movies thrilling as are the thrills themselves. In those conversations, however, there is seldom mention of Madeleine Carroll, the one who set the standard.

Alfred Hitchcock was interested in finding a cool blonde leading lady to star in his 1935 spy thriller THE 39 STEPS.  He struck cinema gold with Madeleine Carroll.  Not only was the film itself a sensation, but so were its director (now an established force in British suspense pictures) and the film’s leading lady.  Given the popularity of THE 39 STEPS it was no surprise that Hitchcock called on Ms. Carroll to star in his next picture, SECRET AGENT.  Luckily it too was to be a spy thriller featuring a cool, sexy, smart blonde.

SECRET AGENT is Alfred Hitchcock’s nineteenth film and the third in what has come to be known as his classic, thriller sextet.  The “sextet” is made up of THE MAN WHO KNEW TOO MUCH (1934) – THE 39 STEPS (1935) – SECRET AGENT (1936) – SABOTAGE (1936) – YOUNG AND INNOCENT (1937) and THE LADY VANISHES (1938) – films Hitchcock made at Gaumont-British Picture Corporation before heading to Hollywood.  SECRET AGENT didn’t replicate the success of its predecessor, which is my favorite of the six, but it hurt neither the reputation of the director or the blonde.  Both were now international stars.  In fact, by the time SECRET AGENT was released Madeleine Carroll had already arrived in Hollywood with a four picture deal with producer Walter Wanger.

SECRET AGENT features many recognizable Hitchcock film elements such as international espionage, “the wrong man” theme, murder, the aforementioned cool blonde and even climactic scenes set on a train.  Unfortunately, AGENT doesn’t flow quite as smoothly as THE 39 STEPS and approaches nowhere near the caliber of the best films Sir Hitchcock would make later in Hollywood.  That said it’s still worth a watch even if you happen to see a poor copy of the film – as I did.  A mediocre Hitchcock spy thriller still beats most other spy thrillers.

As best I can determine, and I admit I was a bit confused at times – SECRET AGENT is set during World War I and features John Gielgud as British novelist Edgar Brodie, an officer whose death is faked so he can go abroad under the assumed name of Richard Ashenden to kill a German agent.  Madeleine Carroll plays agent Elsa Carrington who poses as Ashenden’s wife to assist and to strengthen the guise.  Also sent to assist Ashenden is “the General,”  a killer with (a really fake) Mexican accent played by Peter Lorre.  And rounding out the top echelon of agents… er…rather, actors is Robert Young who plays a handsome spy in a quasi-romantic cat-and-mouse with Carroll while actually in pursuit of Ashenden.

Despite the inconsistencies in the film and the somewhat cumbersome plot, there are two definitive standouts in SECRET AGENT.  The first is Peter Lorre whose manic performance is fantastically entertaining.  In fact Lorre’s performance was hailed as one of Britain’s ten best that year.

The other standout is Madeleine Carroll who shines as Elsa amidst the confusion.  In a mediocre film, by Hitchcock standards, Carroll brings forth the same sort of strong, beautiful protagonist she’d presented a year before in THE 39 STEPS and cements her place among the great Hitchcock stars.  Or Madeleine should be viewed in that manner because she manages a level of cool sophistication that makes her seem above the fray, yet still comes across warm and charming.  She is the cool blonde with unique depth and smarts who adds class and intelligence to the movie in a down-to-Earth sort of way.  That’s not easy to do.  And then there’s her beauty, which even a bad print of the film doesn’t subdue.  I mean, her cheekbones deserve their own billing!

There are three unfortunate things about SECRET AGENT that I wish would’ve turned out differently.  The first of those is that this film is the last feature on which Hitchcock works with Peter Lorre.  The second is that it’s the last time Hitchcock works with Madeleine Carroll.  And the third is the casting of John Gielgud, which doesn’t work.  Gielgud, a superb, classically trained actor comes off as a stiff in AGENT in comparison to Lorre’s animation and Carroll’s exuberance.  Hitchcock had wanted Robert Donat in the role in hopes of recapturing the chemistry Donat and Carroll share in THE 39 STEPS.  That didn’t work out, however, and Gielgud was hired.  By several accounts neither the director or the actor were particularly happy with the arrangement and it shows.

That quote by Hitchcock may have been his excuse for using blondes as important characters in his films, but in truth the Hitchcock blonde is rarely (if ever) a victim.  In fact, it could be argued that the dichotomy of exterior coolness and vulnerability coupled with strength and intelligence is what makes these women so compelling.  If they’d been nothing more than helpless pretty faces I think they’d have been easily overlooked or forgotten.  These are strong women who come out on top despite the perilous situations or circumstances they find themselves in.  The Hitchcock blonde may often be one small step away from disaster, but she makes it through no worse for wear.  Or almost.  Marion Crane.

In that regard Alfred Hitchcock couldn’t have done better than Madeleine Carroll to set the standard for those that followed – the Grace Kellys and the Kim Novaks.  We’d see in these actresses and in the others varied incarnations of the characters Madeleine portrayed in the two films she made with Hitchcock the details of which I describe above.  To me Madeleine Carroll brought more to the table than the one many see as the quintessential Hitchcock Blonde, Grace Kelly.  Not that Kelly isn’t perfect for the roles she plays in the three Hitchcock films she appears in, one of which is my all-time favorite Hitchcock movie.  But still – as far as talent I think Madeleine Carroll had in her arsenal as varied a repertoire as my favorite Hitchcock Blonde, the best actress of them all in my opinion, Eva Marie Saint.  That is, excepting Ingrid Bergman and Carole Lombard neither of whom I think of as “Hitchcock Blondes.”  In any case, along with the Hitchcockian ideal exterior to match what would become the archetype Madeleine Carroll had acting chops and even a certain gravitas along the lines of Saint.

After SECRET AGENT Madeleine Carroll appeared in three other films released in 1936.  All Hollywood productions.  The ads for the first of those, William A. Seiter’s THE CASE AGAINST MRS. AMES billed her as “the most beautiful woman in the world.”  While few would argue with that I wish they’d added “with the talent to match.”  Madeleine had the undeniable, inexplicable screen presence of the great movie stars, and – if I may say – the wherewithal to teach Hitchcock a thing or two about shooting blondes involved in espionage.  There’s no doubt the director and future Hitchcock Blondes benefitted from Carroll’s stints before the master’s camera.  She did it and them great justice.  It’s no wonder that only two years after the mediocre SECRET AGENT – by 1938 – Madeleine Carroll would be the highest paid actress in the world.

This is my submission to the Madeleine Carroll Blogathon hosted by Ruth at Silver Screenings and Dorian at Tales of the Easily Distracted. The blogathon will run February 26-27, 2015, and features a fantastic list of entries celebrating Madeleine’s career – and birthday (Feb. 26)!  Be sure to visit the host sites! 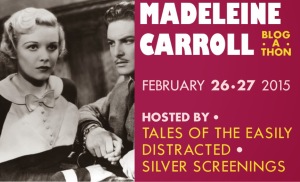 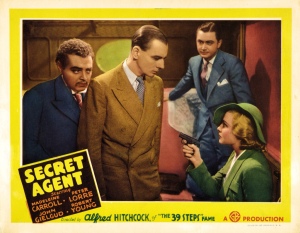 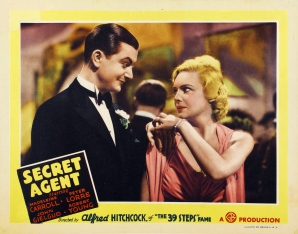 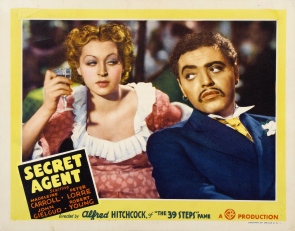 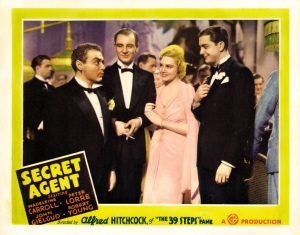