The Academy of Motion Picture Arts and Sciences (AMPAS) first introduced the ‘Best Original Song’ category at the 7th Academy Awards ceremony in 1934.  That year “The Continental” from Mark Sandrich’s The Gay Divorcee, music by Con Conrad and lyrics by Herb Magidson became the first Best Original Song.

Since “The Continental” songs nominated for the Best Original Song Oscar have had varying degrees of popularity – some have become huge hits while others have disappeared into the void to never be heard again.  But popularity has little to do with what makes a song worthy of an Oscar.  To me the best and most memorable songs evoke particular scenes from the films in which they are featured plus they can also stand on their own.  Academy voters make their decisions based on different standards, however.

To be eligible for a nomination in the Best Original Song category said song must be written specifically for the movie in question and, “a clearly audible, intelligible, substantive rendition … of both lyric and melody” must be presented either as it appears in the movie itself or as the song during the film’s credits.  The nominations for Best Original Song are compiled from votes from Academy members who are songwriters and composers and the winners are chosen by the Academy membership as a whole.

Despite the wealth of talent involved in the nominations and subsequent voting on winners, however, I believe that the actual best song hasn’t always been awarded the Oscar.  So, I put together a list of examples, a few instances when – in my opinion – Academy voters erred in making their choices.  I then follow that list with another highlighting instances when they got it just right.

If you’re wondering what qualifies me to make such claims, by the way, know that I have substantial music training myself.  To begin with I took piano lessons for about a year when I was ten-ish, which culminated in a recital in Carnegie Hall.  Yes!  THE Carnegie Hall.  The exact same stage where Judy killed ’em a couple of decades before!  You should know that when I concluded that recital the judge, a portly man of serious demeanor said “That was one of the best recitals I’ve heard all day.  You almost play the piano musically.”  I was beside myself with excitement and pride.  And that’s not all – I can also keep a mean beat on a conga drum, on bongos and in a crunch on empty beer bottles.  So, as you can see I am more than qualified to assess Best Original Song misses and hits.

I’ll start off with 1937 when the Best Song winner was “Sweet Leilani” from Frank Tuttle’s Waikiki Wedding • Music and lyrics by Harry Owens.  This is a pretty song sung by Bing Crosby who I never tire of listening to, but for my money the Oscar should have gone to the Gershwins for “They Can’t Take That Away from Me” from Mark Sandrich’s Shall We Dance • Music: George Gershwin (posthumous nomination) • Lyrics: Ira Gershwin.  Despite the lyric they took it away from them.

At the fourteenth Oscars in 1941 “The Last Time I Saw Paris” from Norman Z. McLeod’s Lady Be Good • Music: Jerome Kern • Lyrics: Oscar Hammerstein II took Oscar home.  Well, too bad.  Oscar should have held out for “Blues in the Night” from the movie of the same name directed by Anatole Litvak • Music: Harold Arlen • Lyrics: Johnny Mercer.  Still a kick-ass song if I may say.

1943 presented a particularly tough choice, but I’m compelled to mention it anyway because I think my vote would have been cast for one of the songs that didn’t win.  The gorgeous tune, “You’ll Never Know” from H. Bruce Humberstone’s Hello, Frisco, Hello • Music: Harry Warren • Lyrics: Mack Gordon got top honors.  While that one’s no doubt a standard with beautiful renditions still being recorded today,  Arlen and Mercer’s  “That Old Black Magic” from George Marshall’s Star Spangled Rhythm was one of the other nine nominees and I may well have voted for it.

I have a bit of a beef with the 1944 winner “Swinging on a Star” from Leo McCarey’s  Going My Way • Music: James Van Heusen • Lyrics: Johnny Burke.  While there’s no doubt Bing is wonderful and the music is catchy how could they possibly not give Oscar to “The Trolley Song” from Vincente Minnelli’s Meet Me in St. Louis • Music and Lyrics by Ralph Blane and Hugh Martin?  Not to mention that Blane and Martin’s “Have Yourself a Merry Little Christmas” wasn’t even nominated.

1948 saw “Buttons and Bows” from Norman Z. McLeod’s The Paleface • Music: Jay Livingston • Lyrics: Ray Evans take home the Oscar.  This one’s a no-brainer! “It’s Magic” from Michael Curtiz’s Romance on the High Seas • Music: Jule Styne • Lyrics: Sammy Cahn should have won!  Any day of the week and twice on Sunday.  One of the most beautiful love songs ever written…

“You sigh, a song begins,

You speak and I hear violins

In 1951 the Oscars presented another difficult choice between two terrific songs.  The song that took home the award was “In the Cool, Cool, Cool of the Evening” from Frank Capra’s Here Comes the Groom • Music: Hoagy Carmichael • Lyrics: Johnny Mercer.  Again here we have another great song interpreted by Bing, this time accompanied by Jane Wyman in the movie.  BUT also nominated that year was the gorgeous “A Kiss to Build a Dream On” sung by Kay Brown in László Kardos’ The Strip • Music and lyrics: Burt Kalmar (posthumous nomination), Harry Ruby, and Oscar Hammerstein II.  If I owned the Oscars “A Kiss…” would’ve won .

1954 saw several errors in judgment in Oscarland.  It’s no secret that I think Judy Garland was robbed of the Best Actress Oscar that year for her portrayal of Vicki Lester / Esther Blodgett in George Cukor’s A Star is Born.  Worse still, adding insult to injury is that “The Man that Got Away” from that movie • Music: Harold Arlen • Lyrics: Ira Gershwin lost Oscar to “Three Coins in the Fountain” from Jean Negulesco’s movie of the same name • Music: Jule Styne • Lyrics: Sammy Cahn.  The Styne/Cahn song is a wonderful melody, a hopeful song and the movie features the best rendition sung by Frank Sinatra.  No doubt.  But honestly…no.  I’m not having it!  The night is not the only thing that’s bitter!

Jumping ahead to 1967, the fortieth Oscars when the clever “Talk to the Animals” from Richard Fleischer’s Doctor Doolittle • Music and lyrics: Leslie Bricusse beat the simple “The Bare Necessities” from Disney’s The Jungle Book directed by Wolfgang Reitherman • Music and lyrics: Terry Gilkyson.  My opinion – wrong choice!

1974 has arrived and the disaster movie set in a skyscraper features an Oscar-winning song that proves prophetic and then some, “We May Never Love Like This Again” – um…actually, most of you in the building won’t.  The movie is John Guillermin’s The Towering Inferno and the song, sung by Maureen McGovern has music and lyrics by Al Kasha and Joel Hirschhorn.  Well, OK – I have to admit that the right song won that year, but just to hear Mel Brooks’ acceptance speech I would’ve awarded the statuette to the title song “Blazing Saddles” from his comedy classic of the same name • Music: John Morris • Lyrics: Mel Brooks.

Since I have this video I’m sharing it, but I warn it is not good quality.  I taped this on my iPhone, the first-ever video I shot on a phone at last year’s Turner Classic Movies Film Festival during Robert Osborne’s interview with Mel Brooks in the lobby of The Roosevelt Hotel.  Bad quality and all I think it’s fun.  Brooks discusses the writing of “Blazing Saddles” and sings a bit of it.

Finally, my last ‘miss’ on the list is from 1977 when Oscar went home with  “You Light Up My Life” from Joseph Brooks’ You Light Up My Life, music and lyrics by Joseph Brooks.  Sung by Debby Boone that song was a huge hit.  But it’s always gotten on my last nerve.  I would have given the Oscar for Best Original Song in 1977 to the now more iconic “Nobody Does It Better” from Lewis Gilbert’s The Spy Who Loved Me • Music: Marvin Hamlisch • Lyrics: Carole Bayer Sager because…well, nobody did it better.

…also known as my favorites – Oscar voters were right on target with these choices.

In 1939 the Oscar went to “Over the Rainbow” from Victor Fleming’s The Wizard of Oz – music and lyrics by Harold Arlen and E. Y. Harburg.  “The dreams that you dare to dream really do come true” 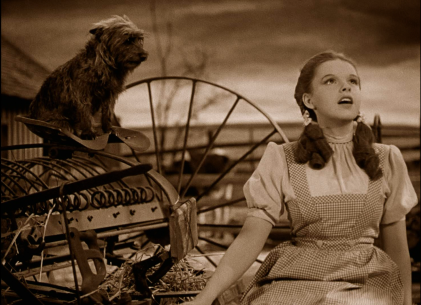 The thirteenth Academy Awards in 1940 chose “When You Wish Upon a Star” from Disney’s Pinocchio the Best Original Song • Music: Leigh Harline • Lyrics: Ned Washington.  “…makes no difference who you are” you can’t dispute this was the only choice!  A song so wonderful, in fact, that it became the official theme of all things Disney. 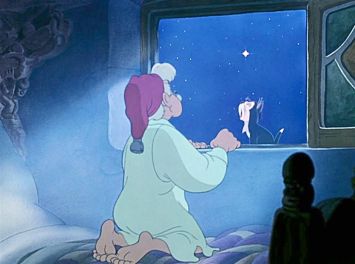 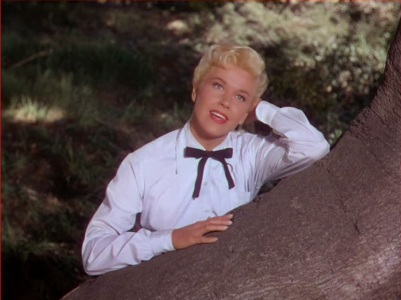 “Gigi,” the title song of Vincente Minnelli’s 1958 Best Picture winner took home the Oscar for Best Original Song.  Music and lyrics by Alan Jay Lerner and Frederick Loewe respectively.  Sublime.  “Oh, what miracle has made you the way you are?”

In 1961 the deserving winner was “Moon River” by Johnny Mercer and Henry Mancini written for Blake Edwards’ Breakfast at Tiffany’s.

In 1968 they saw Norman Jewison’s The Thomas Crown Affair, a movie about a sexy, mysterious executive in a cat and mouse game with a beautiful insurance investigator.  In one scene Crown is flying a plane – circling like a windmill just as his mind keeps circling back to her – “like the circles that you find in “The Windmills of Your Mind.”  That year’s Oscar winner for Best Original Song was written by Alan Bergman, Marilyn Bergman and Michel LeGrand.

Talk about the perfect marriage between a song and a movie – there’s no better example than the 1969 Oscar winner in this category.  From George Roy Hill’s Butch Cassidy and the Sundance Kid  it’s “Raindrops Keep Fallin’ On My Head” by Hal David and Burt Bacharach.

I end my list with the Best Original Song of 1973 – it’s Barbra and “The Way We Were” by Alan Bergman, Marilyn Bergman and Marvin Hamlisch for Sydney Pollack’s movie.  Memories.

And there you have my hits and misses.  Let me know yours.  Here’s the complete list of Best Song Winners and nominees available from the Academy Archives.  And since The Oscars are coming up in a few days you may want to take a look at the full list of 2015 nominees –  find them here.

This post is my entry for THE CRAFTS! week in the 31 Days of Oscar Blogathon, an event I’m co-hosting with Kellee (@IrishJayHawk66) of Outspoken and Freckled and Paula (@Paula_Guthat) of Paula’s Cinema Club.  Be sure to visit both of their sites or this one Once Upon a Screen throughout February as we feature a fabulous array of entries dedicated to Oscar.

And be sure to stay tuned to Turner Classic Movie’s (TCM) 31 Days of Oscar marathon, which runs through March 3rd.

Follow Once upon a screen… on WordPress.com
Join 61,839 other followers