I began 2014 on Once Upon a Screen with a list of memorable character introductions in film, or as I called them “Film First Impressions.”  That list included fourteen introductions that make an impression each and every time I watch the films in which they’re featured.  You can take a look at that list here, a list I might add that was intended as a one-shot entry.  In other words, I didn’t think I’d want to add to it.  However, almost immediately after publishing it several other memorable character introductions came to mind that are just as memorable as my original choices and that have been circling in my mind ever since.  As you’ll see several of these are not the types of individuals you want circling anywhere near you, much less in the recesses of your mind so I decided to post a continuation of that original list, albeit these many months later. These – as is the case with the original fourteen – are introductions that remain true, memorable first impressions no matter how many times we experience them.  Let me know what you think.

(These are in no particular order and include spoilers so beware.)

1.  “Last night I dreamt I went to Manderley again.”

She comes seemingly out of nowhere and steps ever closer, invading our space in a familiar Hitchcock POV shot.  Queen of the roost and guarding a memory this woman lets on by her seemingly impregnable position at first sight that she’s not about to let the second Mrs. de Winter (or us) gain an inch on the hold she has over Manderley.  This is, of course, from Alfred Hitchcock’s REBECCA (1940) and the introduction of Judith Anderson as Mrs. Danvers.

I jump from a menace in whispers and shadows to a wanted man in David Fincher’s disturbing SE7EN (1995), a movie about a serial killer who commits murders based on the seven deadly sins.  By the time John Doe walks into the police station to turn himself in he’s committed (that we know) five of seven gruesome murders.  Now all points to the fact he’s closer to his goal as his clothes are splattered with blood.

The scene begins with a man whose legs we see stepping out of a taxi and walking ever so slowly toward the station.  We follow from behind as he enters trying to get the detective’s attention, repeating the call until he screams, “DETECTIVE!” in what is the movie’s big reveal.  I don’t know about you, but my heart is pounding after the almost two hours I’ve just invested in this thriller, which is ultimately what makes this nonchalant introduction such a shocker.  As intended its simplicity is insulting. As John Doe is an unbilled and haunting Kevin Spacey. 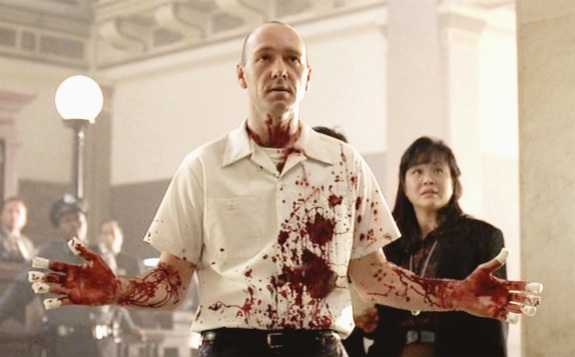 The most intriguingly handsome man at the Twelve Oaks barbecue.  When that camera pans toward him and… “well, he looks as though he knows what I look like without my shimmy.”  It’s very difficult indeed not to swoon when one meets Rhett Butler at the bottom of that sweeping staircase in Victor Fleming’s GONE WITH THE WIND (1939).  A 75-year-old first impression that never gets old.

I gave a mention to Karloff’s introduction as The Monster in James Wales’ FRANKENSTEIN (1931) on my first list and also noted the magnificent impression left by the first time we see Christopher Lee as Dracula in Hammer’s HORROR OF DRACULA directed by Terence Fisher in 1958.  Why I would ever leave out the first time Lugosi shows up on-screen as the character he made legendary in Tod Browning’s DRACULA (1931), a character I love is beyond me.  So here he is – the count as we first see him with a special notation to the actual greeting scene as he descends that grand staircase and says, “I am Dracula.”  Yes you are!

5.  “This is the most uncomfortable coffin I’ve ever been in.”

When we are first introduced to Martin Landau as Bela Lugosi in Tim Burton’s ED WOOD (1994) he’s lying stiff in a coffin in a Hollywood mortuary.  Suddenly he starts complaining to the salesman, “Too constrictive.  I can’t even fold my arms. This is the most uncomfortable coffin I’ve ever been in.”  Perfection!  I remember the accolades Landau’s depiction of Lugosi received when ED WOOD was released and he deservedly went on to win the Oscar for Best Supporting Actor.  Landau doesn’t disappoint in his portrayal of a washed-up, ex horror movie star and future legend and neither does this first impression, which sums up the characterization to a tee.

Bruce is what the cast and crew of Steven Spielberg’s mega-hit, JAWS (1975) nick-named the mechanical star of the film that wouldn’t work properly, according to all sources.  Now, whether it’s due to those mechanical problems or because the film’s director simply knew that holding off showing the shark would compound the tension I don’t really know.  I’ve heard and read both.  The fact remains that it worked to the film’s advantage that Bruce doesn’t make a full appearance until over an hour into the movie.  By this point we know all too well the horrors of what this beast can do so our senses and tension are on the surface as Police Chief Brody is given the task of throwing disgusting chum into the water.  Brodie complains to his two boat mates about having been given the most distasteful task and just then out of the water comes this huge shark that nearly takes his hand off, causing the shocked law enforcer to nearly swallow the cigarette that dangles from his lips.  This scene is chilling and – even after having watched JAWS I’d say at least 30 times – I still hold on when this scene approaches.  Add to that the fact that the scene yielded one of, if not the, most famous line in film history.  Here’s to bigger boats!

This one is the sultry silhouette of one of screedom’s greatest femme fatales played to perfection by Jane Greer in Jacques Tourneur’s 1947 film noir, OUT OF THE PAST.  We hear the words noted above as Jeff Markham (Robert Mitchum) recounts the story in flashback.  He’s talking about the first time he saw Kathy Moffit, the woman he was sent to Mexico to find.  Just as Jeff we too are mesmerized when the vision appears and together – Jeff and Kathie – go on to create steamy, noir goodness.  I included two other killer ladies of noir in the first list, but as far as first impressions go, Miss Moffit must stand alongside them.  I recently saw OUT OF THE PAST on the big screen and soon after the restored film on the Warner Archive bluray.  The following image doesn’t do this first impression justice, but trust me it’s as good as it gets.

Another in the “How could I have excluded this one?” category.  This is one of the most famous movie first impressions in history when screen goddess Rita Hayworth as Gilda in Charles Vidor’s GILDA (1946) does that famous hair flip to become a legend.

The Monster got his entrance so why wouldn’t his bride get the same attention?  Actually, she gets more and louder.

The electricity, if you will, has just been turned off and the restraints on the new creation removed.  We see her fingers move and hear a groan then Dr. Pretorius (Ernest Thesiger) removes the bandages from her eyes revealing two startled and startling eyeballs staring back at us.  Henry Frankenstein (Colin Clive) can now utter his famous line again, “She’s alive!  Alive!”

What follows is the exposure of – as I’ve mentioned before – a female cinematic monster to match the big boys despite the fact she gets but a few moments in the spotlight.  After the eyes are uncovered the two scientists bring the operating table to an upright position and begin removing the rest of the bandages on the creature.  Then we meet The Bride in all her hideous glory in a white gown – made all the more unforgettable by the bird-like, jerky motions of her head as she takes in her surroundings.  Kudos must be given to Elsa Lanchester for a memorable, if brief, performance – one for the ages.

The description of her surroundings – an old, decrepit mansion in Hollywood showing traces of its former glory only in grotesque memorabilia all which mirror the woman who inhabits it.   This is Norma Desmond who used to be big in Billy Wilder’s SUNSET BLVD. (1950).  We first see Desmond as Joe Gillis (William Holden) sees her and just as he we are struck by the fact the eccentricity of the mansion pales in comparison to the woman who is describing her wishes for the burial of her chimp.  I love Norma, but she’s off her rocker (possibly the only time I will ever admit that) – and this is one of her finer moments.  It’s downhill from there.  But, when you meet Norma Desmond you will never forget her.

I hung my head in shame about not including this one in my first list as soon as I hit the publish button.  An entrance worthy of a king.

Poor, innocent, lovely Fay Wray is tied to two columns on an exotic island as a sacrifice for Kong, the king of the jungle-nation.  If you’re not convinced this is a major event after waiting a long time to get to this point in the movie, Max Steiner’s dramatic score will remind you.  After Wray is secured the ceremony is complete and Kong is summoned to his sacrifice.  We hear his growl as he approaches and when we get a load of this guy he impresses – all eighteen or so feet of him pushing aside massive trees as he prepares to grab beauty.  A bravura introduction to one of the most memorable and inspiring characters in the movies. 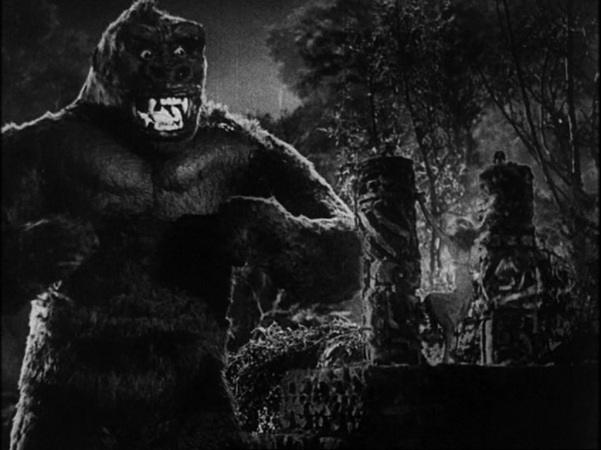 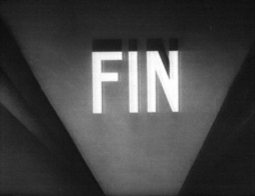 There you have eleven more memorable film character first impressions, bringing the total to twenty-five Aurora-style indelibles.  I don’t plan to be back with more, but don’t bet the farm on that.