“The paths of glory lead but to the grave.” – from “Elegy Written in a Country Churchyard,” by Thomas Gray

Stanley Kubrick offers a portrayal of grotesque inhumanity in his 1957 film, PATHS OF GLORY – as harrowing a motion picture as I’ve ever seen. 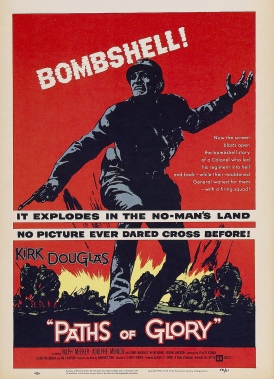 PATHS OF GLORY is one of those movies that must be seen and not described (although I attempt it here) because there really is no way to do it justice in words.  As the poster declares, it is a BOMBSHELL!  In images.  Of PATHS, director Martin Scorsese said that he’d never seen such an honest film and what made it honest was the objective way Kubrick shot it, specifically by way of the dolly shots used throughout the film that “allowed the audience to make up its mind about what it was seeing.”   That sums up

the experience of watching PATHS OF GLORY.  There simply is no way one cannot be affected as Kubrick ensures the viewer gets as close to being a part of the action as possible.  Dolly shots are a Kubrick staple, present in all of his films, but those used in PATHS OF GLORY along the trenches as Kirk Douglas walks through are particularly striking.

The story depicted in PATHS OF GLORY takes place during the First World War.  French and German armies are at a stalemate, facing each other along 500 miles of fortified trenches for two years straight as the story opens.  Any attempt to advance into enemy lines results in heavy casualties.  Eager for his French Army to advance, General George Broulard (Adolph Menjou) orders General Mireau (George Macready) to take hold of “The Anthill,” a German position that’s within view of the French Army, but is impenetrable.  Mireau recognizes the insurmountable task the men under his command are being asked to perform, more so due to the fact that Broulard has given him just two days to achieve the objective.  But the prospect of getting more stars on his uniform is overwhelming to Mireau and any concern regarding casualties to his men is little more than a ruse.

A now determined General Mireau visits the trenches to advise Colonel Dax (Kirk Douglas) that he will be leading the charge.  Dax knows this is a doomed offensive, but has no option but to follow orders.  The day of the attack arrives and before long it is halted without much of an advance in what is in essence a suicide mission.  The devastating loss of life – shot with stark realism – allows for no advance toward The Anthill.  General Mireau watches with alarm from the trenches, safe from enemy fire, but outraged by his perception that his men are nothing but cowards.  Desperate to force the fighting men forward, the man orders the French artillery unit to fire on their own men.  That order is not obeyed, however, and his mission is a failure.  To save face Mireau orders three men be made examples of, one from each company must be executed for cowardice.  An outraged Col. Dax requests to serve as defense for the three men ultimately chosen, each in a different, but equally absurd manner, just as real-life war chooses those who die absurdly in a way.  It’s not surprising that the military tribunal that follows is a farce adding further insult to the absurdity of war and its politics, which is brought to a boil – in me – with the casual pinch to a man’s cheek as he’s strapped into a cot, which is tied to a pole facing the firing squad.

Whether the institution or those under its command get what they deserve in PATHS OF GLORY is (I suppose) for everyone to determine.  I can say it does not occur in a public display or attrition, which I always hope for, but which would no doubt reduce the film to my level.  A true act of cowardice seen early in the film is treated similarly.  So clearly Kubrick’s intention was not to allow us even a moment of satisfaction in that regard.  What he held dearest as far as telling this story are the visuals and he pulls no punches there making PATHS OF GLORY a cinematic experience and an absolute must-see.  While this film is often difficult to watch it also renders you unable to look away.  Aside from Kubrick one must also credit cinematographer Georg Kraus for his outstanding photography and an exceptional cast led by Kirk Douglas whose natural intensity is perfect for this film and story.

PATHS OF GLORY may well be my favorite Stanley Kubrick film although I really like his directorial debut effort, THE KILLING (1955), which preceded PATHS.  I find several of Kubrick’s subsequent films too long and PATHS OF GLORY is the opposite – despite those often excruciatingly real long shots previously mentioned, the film is tight and goes by in a flash, culminating in an odd way with a scene that I’m pretty sure I don’t get, but that is nonetheless touching.  The men are in a nightclub on repose from the fighting and a young, captured German woman is forced to sing a song.  Jeers soon turn into a chorus of humming and tears start to flow as cruelty dissipates into grief.  I guess the point is to remind us of the humanity at stake in war.  The young German woman is played by Christiane Harlan who would become Stanley Kubrick’s wife until his death in 1999.  This is a small part, but Harlan and the scene are memorable.

PATHS OF GLORY is based on a 1935 novel of the same name by Humphrey Cobb, who used a real-life event from WWI as the basis for his story.  That event was the random execution of four corporals of the French 136th Regiment to set examples for others following a failed attack against a hill near Souain in Champagne.  Cobb’s novel, not surprisingly, has experienced a resurgence since Kubrick’s film was released, a film that has also gained in stature through the years.

PATHS OF GLORY was made thanks in large part to Kirk Douglas who facilitated its funding.  The film was critically acclaimed, but not well received by audiences in 1957 and it would be banned in France for nearly 20 years due to its damning portrayal of a French officer.  But, despite two box office disappointments in a row – THE KILLING and PATHS – Kubrick was front and center in the mind of all that was Hollywood at the time.  In a 1958 interview with CBC radio, Kubrick said, “Hollywood offers the best opportunity and possibilities for young people.”  He was specifically referring to the upheaval the insurgence of television caused for the film industry in the 1950’s.  In order to prove itself outstanding and unique, Hollywood was offering ways for young filmmakers to make their mark.  Although Kubrick would encounter countless problems with censors and many others in the film industry, he did not conform to either filmgoers or critics and as a result the mark he made was often unique.  PATHS OF GLORY left one of those unique and indelible Kubrick marks, ultimately becoming a standard in the depiction of war on film. 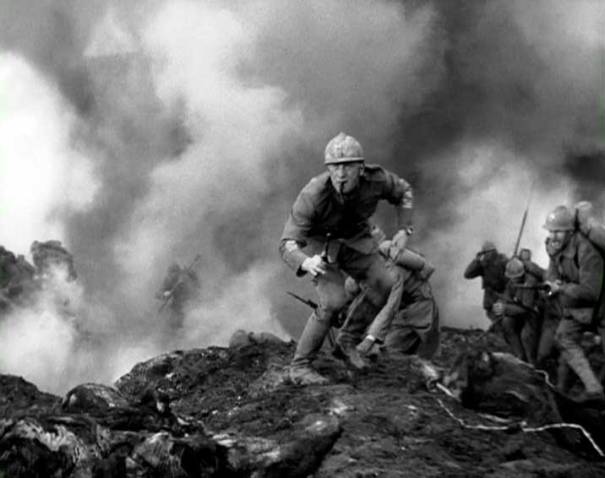 This is my entry to the World War One in Classic Film, a historical blogathon hosted by Movies, Silently and Silent-ology.  Please visit the host sites to read many more entries on films and WWI in this centennial remembrance. 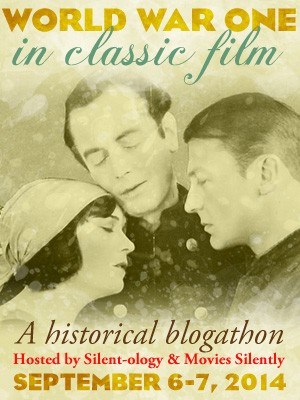