A roaring blast of dynamic Action!

A racketeer named Johnny Eager is out on parole and posing as a taxi driver, a ruse intended to make his parole officer think he’s now a reformed man.  Nothing could be further from the truth.   Not only has Eager not turned over a new leaf, but he has lofty plans to grow his business ventures and doesn’t care what he has to do to make his plans come to fruition.  Murder, swindling, blackmail – if it benefits him, he acts on it.

“You’re cruel, Johnny!  You’re almost one hundred percent bad.  But whatever you are, darling, you’re my man!”

Eager’s parole officer’s an extremely gullible man, however, and buys the taxi driver charade hook, line and sinker.  During one of his visits to Johnny, he introduces the “ex-con” to a socialite student named Lisbeth “Liz” Bard.  Liz and Johnny are immediately attracted to each other – she’s a “different brand of dame” than Johnny’s used to and she’s intrigued by both Eager’s good looks and the hard edge he’s trying to hide.  Soon after they meet, Johnny finds out that Liz is the stepdaughter of John Benson Farrell, the former prosecutor, now the district attorney, responsible for sending him to prison.  Farrell despises Eager and doesn’t believe for a moment the felon has any intentions of leaving a life of crime behind.  With his powers as DA, Farrell gets an injunction to prevent Johnny’s planned dog racing track from operating.

Although Johnny Eager is taken with Liz’s beauty and class, he doesn’t hesitate to use her in a plot to blackmail Farrell.  One night when Liz comes to Eager’s

apartment for a romantic evening, one of Johnny’s men, Julio, bursts in with a gun as if he has a vendetta against his boss.  The men feign a fight during which Julio drops the gun that Liz then picks up and uses to shoot him dead.  Or so she thinks.  In truth, the gun was filled with blanks but Johnny rushes Liz out of the apartment before she realizes Julio’s not dead with the excuse of keeping her out of the mess and “taking care of the body.”  Eager’s plan works and he now has the gun with Liz’ fingerprints all over it, which he then uses to blackmail Farrell into lifting the injunction on the racetrack.  Farrell succumbs to the blackmail for the sake of his daughter without much of an argument.

As a result of the crime she thinks she’s committed, Liz has a nervous breakdown (or that’s what I’m calling it), spending sleepless nights worrying about the prospect of Johnny taking the blame for her actions and ending up back in jail.  She’s also heartbroken about having killed a man.  Liz doesn’t see how ruthless Johnny is.  And he is ruthless. Aside from using the woman he loves in a blackmail plot, Eager refuses a former girlfriend who’s in trouble a simple favor, murders a childhood friend without blinking an eye, and sends his girlfriend away to Florida for a few months the morning after his first date with Liz to get her out of the way – all cool as cucumber.  This is a cold guy.

But, as is the course of fate, Johnny gets his due as what he’s got coming comes his way.  In the end there is a kind of redemption for Johnny Eager as he learns about love – although his lesson is not learned in as sappy a way as that sounds.  It’s an interesting journey.  Crime simply doesn’t pay.

Johnny Eager is an enjoyable film.  Much better than I expected, in fact.  It’s too bad it gets relatively little attention aside from the off-screen rumors that surround it with regards to the off-screen relationship between Robert Taylor and Lana Turner, who play the title character and his ill-fated lover, Liz Bard.  Helmed by veteran crime film director, Mervyn LeRoy who had big hits in the genre with Little Caesar (1931) and I Am a Fugitive from a Chain Gang (1932), Johnny Eager has a fine script.  The story was written by James Edward Grant who shared the screenplay credit with John Lee Mahin.  The film’s pacing is great and its plot is straight-forward, tight and compelling with plenty of memorable lines throughout. The look of the film is the another standout featuring cinematography by Harold Rosson who shot many other memorable movies – The Wizard of Oz (1939),  Singin’ in the Rain (1952), On the Town (1949) and The Asphalt Jungle (1950), among them.  Rosson’s lighting is wonderful in Johnny Eager, making the film a highly entertaining noir with its beautiful scenes depicting the lights and shadows that enhance the mood and deepen the drama.

The deed is done

Lana Turner was 20 years old when she appeared in Johnny Eager.  By that point she’d already made her mark in Hollywood in large part thanks to Mervyn LeRoy who (sort of) mentored her, bringing her over to MGM  with him when he left Warner Bros.  By 1941 she’d appeared in about eighteen movies and was earning $1,500 a week, a substantial amount in those days.  Turner had enough of what MGM wanted to make her a bankable star – audience appeal.  On the personal front Lana was single during the shoot for Johnny Eager with a failed, 7-month marriage to bandleader, Artie Shaw under her belt (the first of her seven marriages).

Meanwhile, Robert Taylor, was married to Barbara Stanwyck and was one of MGM’s most popular leading men.  The MGM brass never considered Taylor a top-notch actor, but there was no denying his appeal.  Along with Tyrone Power, Taylor was referred to as, “illegally handsome” – no explanation needed there.  Now, it’s no surprise that rumors would surface as a result of Taylor and Turner working together in romantic roles because, I mean, look at them.  And while they’re on-screen and together you can’t help but look at them – they sizzle with undeniable chemistry.  Those kisses between the two are real – no doubt about it.  But, who knows if the rumors of a full-fledged affair were ever true.  Robert Taylor would vehemently deny them always.  Yet, Robert Osbourne mentioned during an introduction for Johnny Eager on TCM that “Barbara Stanwyck would always squint her eyes whenever Lana Turner’s name was mentioned” since the making of this film.

He’s Taylor-made for her!

In her autobiography, Lana:  The Lady, the Legend, the Truth, Turner would admit “Bob had the kind of looks I could fall for” and that the two were attracted to each other from the beginning of the shoot.  She also admitted that she, without question, flirted with him.  She said it ended there for her, however, because he was a married man – “I would never be responsible for breaking up a 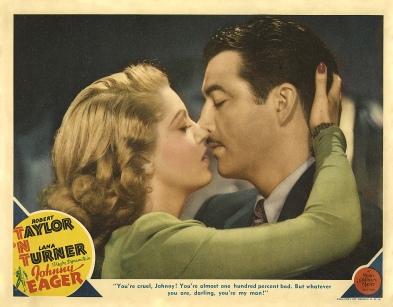 marriage, however unhappy it was.  I wasn’t in love with Bob, not really.  Oh we’d exchanged kisses, romantic, passionate kisses, but we’d never been to bed together.  Our eyes had, but not our bodies.”

Lana went on to say Taylor was a lot more serious about their relationship than she was and when Taylor told her he wanted to tell Stanwyck about their affair, she responded that there was nothing to tell.  Despite Lana’s words, however, Taylor told Barbara Stanwyck about whatever it was that went on between the two and Barbara did not take it well, “disappearing” for four days so she could pull herself together.  According to Turner, Taylor had asked Stanwyck for a divorce so he could marry her and once she learned about this there was no more flirting with Robert Taylor at all.  As is the usual case in the course of true love Hollywood style, Taylor’s feelings for Turner cooled off soon enough.

No matter what the facts are about the extracurricular activities that may have taken place when the cameras weren’t rolling, however, there’s no denying that the mutual attraction between Turner and Taylor didn’t hurt their scenes together in Johnny Eager.  Writer producer Norman Lear would say in an interview once that the sexiest woman in the world in one of the sexiest scenes in movies ever to him was “Lana Turner, as she was held in the arms of Robert Taylor in the terrace scene in Johnny Eager.”  It is pretty hot.

Johnny Eager deserves accolades on its own merits, aside from the undeniably juicy and entertaining sidebars.  Take a look at the film’s trailer here.  Both Taylor and Turner deliver good performances and the film has an impressive supporting cast – a great lot of characters across the board.  Particularly good are Edward Arnold as Liz’ stepfather, John Benson Farrell and Van Heflin who delivers a terrific, Oscar-winning performance as Jeff Hartnett, Johnny Eager’s alcoholic, but intuitive/intellectual right-hand man.  Heflin’s depiction of Hartnett is moving and his chemistry with Robert Taylor, great – their scenes together add weight to the film.  The two men have a complicated relationship in the film, even if only one of the two actually recognizes the depth of the connection.  For instance, Jeff’s affection for Johnny and his disappointment at Johnny’s lack of empathy do a great deal toward ensuring we (as viewers) care for Johnny Eager at all.  Through Jeff Johnny is somewhat redeemed in our eyes otherwise he’d be a completely unlikable character.  Because of Jeff Johnny’s fate matters and so does the outcome of the film.

This post is submitted to the Summer Under the Stars Blogathon (SUTS) (2013), hosted by Jill of Sittin’ On a Backyard Fence and Michael of Scribehard on Film.  The blogathon coincides with Turner Classic Movies’ SUTS event, which lasts all of August each year with each day focused on a different classic star.  Be sure to visit either host site to enjoy entries honoring some of the greatest stars to appear on the silver screen all month long.  Also, be sure to tune in to TCM every single day in August or set your DVRs.  For classic film fans this is as grand as it gets.

Dana Andrews and Peggy Cummins in NIGHT OF THE DEMON (1957)
George Arliss in character as a Millionaire in A SUCCESSFUL CALAMITY (1932)
Loading Comments...
%d bloggers like this: