1967 proved a pivotal year in the movies as it marked the beginning of what was in essence a film revolution.  It was also a great year for standard entertaining fare.  While tensions of war and racial unrest grew throughout the country American audiences were making a definitive shift toward truth in media, but they still enjoyed pure entertainment as well.  Testament to both of those is the fact that what is considered by many to be the best film of 1967 is Arthur Penn’s ultra violent BONNIE AND CLYDE while the box-office champ of the year was Disney’s THE JUNGLE BOOK.

Well, somewhat lost in the fray between landmark and perpetual classic is a charmer hit straight from the Broadway stage and the pen of one of the country’s most popular playwrights, a relative newcomer in the medium at the time, Neil Simon.  The stage production of Simon’s “Barefoot in the Park” opened in October 1963 and closed in June 1967 after 1,530 performances, a hit directed by Mike Nichols. Audiences still showed up to watch the Broadway play for about a month before it closed when the film version of BAREFOOT IN THE PARK directed by Gene Saks opened in Radio City Musical Hall on May 25.  This marks the first movie in which Neil Simon adapted his own play for the screen. No disrespect to Saks, but I’ve often wondered why Nichols wasn’t given the job to helm the movie version when his play was such a hit.  If you know the reason let me know.

BAREFOOT IN THE PARK tells the story of the first week in the life of newlyweds Corie (Jane Fonda) and Paul Bratter (Robert Redford).  Corie is free-spirited and a little air-heady while Paul is conservative and practical.  As the story begins the newly married couple who are madly in love move into a small, fifth floor walk-up apartment in New York City, the height of which is cause for the movie’s running joke.

Corie is eager to begin her life as a married woman and is excited about decorating their new home.  Paul, however, is less than enthusiastic about the apartment as he discovers the five-plus flights he has to climb to reach it, finds a hole in the skylight that allows it to snow inside, there is no bathtub, their bedroom is in truth a closet and meets the odd character who lives in the attic above their apartment – all things Corie considers life’s little adventures.

BAREFOOT IN THE PARK is an amusing romp of little substance.  It is typical Neil Simon fare in that it is a New York-centric, semi-autobiographical, old-fashioned romantic comedy replete with snappy dialogue.  Except, as I suddenly discovered during my latest viewing, this one feels particularly dated with situations that seem contrived.  For instance, the newlyweds who initially can’t keep their hands and lips off each other are soon in a huge fight because Paul’s too much of a stuffed shirt for Corie’s liking.  That’s where the title of the movie/play comes from – the fact that in contrast to Corie, Paul’s not willing to go around barefoot in the park or live life to its fullest.  The entire troubled marriage thing in this case is just not plausible, a reason without merit if you will by today’s standards, which accounts for the entire conflict in the story.  I mean, how could she not have known he was a stuffed shirt before they were married or that it bothered her so much?

Anyway, even given the problem with plausibility, the cast in BAREFOOT IN THE PARK make it entertaining enough to allow for a decent time.  The chemistry between Fonda and Redford is great and although it’s not easy to buy Jane Fonda as naive a character as is Corie Bratter, she still manages a good performance as does Redford in what was his first box office hit.  BAREFOOT was the third of four films in which the two co-starred and despite the fact that Jane was the bigger star at the time, Bob got top billing.  In the TCM introduction to the movie Robert Osborne attributes that to Redford having had a better agent.

The best part of BAREFOOT IN THE PARK for me is Mildred Natwick who plays Ethel Banks, Corie’s lonely mother.  Natwick’s terrific comedic timing brings the delivery of her lines to a level eons above everyone else’s.  The scenes during which we see Ethel struggling through the effects of the climb up to her daughter’s apartment still make me laugh heartily.

Ethel: I feel like we’ve died and gone to heaven – only we had to climb up.

Mildred Natwick was nominated for an Oscar in the Best Actress in a Supporting Role category for playing Ethel Banks, a nomination I think was well-deserved.

Also worth mentioning is Herb Edelman who you might know best as Murray the cop in Simon’s THE ODD COUPLE (1968) or as Dorothy’s ex-husband Stan on television’s The Golden Girls. The always entertaining Edelman plays telephone repairman, Harry Pepper in BAREFOOT IN THE PARK, a small role he reprised from the Broadway play, which by the way also starred Redford and Natwick.

My least favorite part of the movie is Victor Velasco played by Charles Boyer.  Velasco is the bohemian, middle-aged playboy who lives in the attic above the Bratter apartment.  I must admit I’m not a huge Boyer fan to begin with probably due to the fact I don’t understand everything he says. My favorite of his performances being his portrayal of the murdering scoundrel Gregory in George Cukor’s GASLIGHT (1944).  In any case, Velasco and Corie take a liking to each other and it occurs to her almost immediately that he’s just the kind of man who could get her lonely mother out of her shell.

The set-up occurs when Corie plans a dinner for the foursome (Corie, Paul, Ethel and Velasco) and allows Victor to pick the place, which ends up being an Albanian restaurant that features belly dancing.  That’s all fine and dandy except the two who enjoy it are Corie and Victor.  Paul is outraged by Velasco and by the fact Corie so enjoys the man’s lifestyle.  She, in turn, is outraged that Paul can’t seem to let loose.  Meanwhile Ethel is on Paul’s side as she stares in both embarrassment and awe at the behavior of Corie and Victor.  The evening ends with Ethel drinking way too much and spending the night with the playboy.  And that’s when the blow-up between Corie and Paul happens.

As a result of the dinner out with Velasco and the fights that ensues Paul ends up sleeping in the living room under the hole in the skylight with snow falling on him through the night.  The fight endures into the next day with a now fevered Paul thrown out by Corie who wants a divorce, which is just ridiculous.  But anyway, shocked by Corie’s sudden demand for a divorce Paul gets drunk and ends up in Washington Square Park where Corie finds him a while later – foolish, carefree and barefoot.

Considering the many landmark film releases of 1967, many of which you’ll read about in the “1967 in Film” Blogathon for which this post is intended, BAREFOOT IN THE PARK is quite inconsequential.  And it certainly is not among the best in the careers of its stars, but I still recommend it.  Even though the movie is dated it still delivers enough humor to entertain.  Not to mention it stars beautiful people dressed in Edith Head creations.

The “1967 in Film” Blogathon is hosted by Silver Screenings and The Rosebud Cinema. You simply must visit the host sites to read a fantastic array of posts on films released that landmark year. 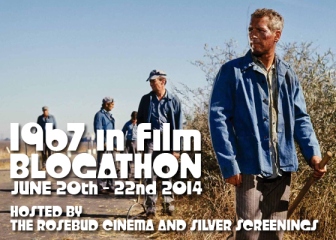