America fell in love with Gracie Allen as soon as she hit the airwaves playing ditzy Gracie to Burns’ straight man in the longest comedy collaboration in show business history – Burns and Allen.  George Burns was always astonished that it lasted as long as it did because the entire act consisted of Burns setting Gracie up and she’d deliver the jokes – all very similar.  George Burns used to say he had one joke for forty years and then she died.

Well, it was one long jokes perhaps, but it was one of the most beloved jokes in entertainment history as it caught fire across several mediums of communications – from the vaudeville stage to radio to the movies to television.  So popular was the Burns and Allen joke, that during their long stint on the airwaves, several running jokes, one of which was a gag about Gracie’s missing brother crowded the headlines and got all of America involved.  Here’s how George Burns described that first, major gag in his book, Gracie: A Love Story:

The missing brother joke permeated the airwaves, supermarket aisles – you name it – with Gracie asking detective agencies in every city she visited to help her find her brother.  CBS even received ransom notes from people asking for money stating they had Gracie’s brother and would return him upon receipt of the funds.  Anyway, you get the picture.  It went on and on.

Vote for the Surprise Party!

The Burns and Allen publicity machine was always thinking and aside from the missing brother stunt, there were several others that took off into the stratosphere.  Most were as phony as Gracie Allen being the nitwit everyone thought she was.  For instance, there were several books, which sold quite well that were written by Gracie – except they really weren’t written by Gracie.  They were written by the Burns and Allen writers, but they became a part of the act’s gimmick and Gracie would answer questions about how she’d written these popular books.  Then there was the “Gracie the artist” stunt where someone caught wind that Allen had paintings she’d done and a huge exhibit was set up to display them.  George Burns said they were so bad that someone stole one before the exhibit and returned it the next day.  But, Gracie was so popular they hailed her artistic talents with art appreciation commentaries published as if Gracie Allen was a serious artist.

Burns and Allen were always a domestic act, never a topical one that incorporated the serious issue of politics – although Gracie had seriously considered running for Governor of the State of Coma, which she claimed to have lived in for many years.  Once in a while George would try to explain a new policy to Gracie but she never quite got it.  Or, actually she’d get it but we wouldn’t get that she got it – in her illogical way.  Anyway, Gracie’s presidential campaign began as a joke and was supposed to be part of a two-part script on the radio show.  Her slogan was, “Down with common sense, vote for Gracie.”  When the gag caught on they extended it a few weeks.  Then Gracie started making unannounced appearances on other shows to talk about her campaign.  CBS joined the promotion full force and the Union Pacific Railroad and the city of Omaha, Nebraska offered to make a “Gracie for President” campaign train and nominating convention.  Gracie still wasn’t taking it seriously – although it was always in jest – but when First Lady Eleanor Roosevelt invited her to D.C. as the guest of honor of the National Women’s Press Club, Gracie, as “Gracie” was campaigning as if it was real.

When Gracie Allen returned to California she had a campaign song, which became a hit.

At her first, official press conference, Gracie announced that her first official act as President would be to settle the California-Florida boundary dispute.  She was also very proud of our national debt because it was the biggest in the world.

Nothing like this “stunt” had ever been tried before and everyone involved was very nervous about it.  George wasn’t even sure Gracie would go through with all of the planned events.  Though terrified about what might happen, Gracie ventured on and when the whistle-stop train tour made its first stop in Riverside, California, 3,000 people were waiting for The Surprise Party candidate. 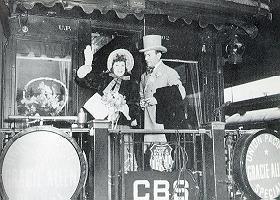 It was the same way for all the scheduled stops – thirty-four in all as the train headed for Omaha.  In every town schools closed and special sales were held in Gracie’s honor, which was perfect because shopping was Gracie Allen’s favorite pass time.  By the end of the tour, Gracie was a real presidential candidate.  On May 17th, 1940, eight thousand delegates nominated Gracie Allen for President of the United States.  There was no Vice President on the ticket.  Gracie didn’t want any vices. 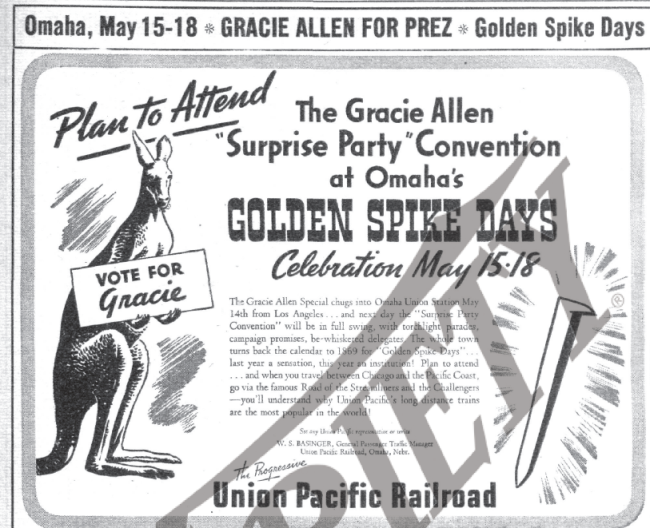 On election day, Franklin D. Roosevelt won a landslide over Allen and the other contender, Wendell Willkie, but Gracie received several thousand write-in votes.  I really wish the history books would make a note of this.  It’s truth.  Even if it was make-believe.