On the day that Turner Classic Movies (TCM) is honoring one of cinemas greatest actors, Claude Rains, I am confessing my unwavering love for Captain Louis Renault in a simple but heartfelt post.  Captain Renault is the scheming, cheating, back-stabbing, lying, womanizing, corrupt prefect in Casablanca, and I adore him.

“I have no conviction, if that’s what you mean. I blow with the wind, and the prevailing wind happens to be from Vichy.”

Casablanca, of course, is Michael Curtiz’ 1942 classic of classics.  One of, if not THE, best film ever made.  One that never gets old, has an outstanding cast of Hollywood greats – Humphrey Bogart, Ingrid Bergman, Paul Henried, Sidney Greenstreet, Conrad Veidt, Peter Lorre, S. Z. Sakall, Dooley Wilson and on and on as every single bit player here is unforgettable.  I won’t get into all the details, the countless elements and performances in this film that make it a cinema great – it’s all been hashed and rehashed.  Plus, this is, after all, all about Louis, the character through which we see the worst of human nature.

I post this in honor of a character I love only partly in jest.  It is Claude Rains being honored today and, needless to say, the one who deserves all the accolades.  He is responsible for my love for Louis.  Rains portrays Capt. Louis Renault as he did all of his film roles, sincerely and with majestic presence.  For a man of small physical stature, Rains commanded the screen from the biggest and best in Hollywood.  His moral-less Renault is one of the main reasons Casablanca remains timeless.  His delivery, impeccable, his reactions hilarious – he somehow manages to be one of the funniest, yet most despicable characters in all of film.  How one manages to do that is the Claude Rains mystique.  I couldn’t possibly explain it, nor do I want to.  I am lucky to simply recognize it.  No doubt the Casablanca script is magnificent, but without Rains it would not have seemed so to the extent it does on the silver screen.  Of that I’m sure.

Captain Renault: Realizing the importance of the case, my men are rounding up twice the usual number of suspects.

Captain Renault: I’ve often speculated why you don’t return to America. Did you abscond with the church funds? Run off with a senator’s wife? I like to think you killed a man. It’s the Romantic in me.

Louis takes advantage of people’s desperation for his own gain, the worst of which is when he forces a young bride to betray her husband with a promise of escape from Casablanca.  Nearly forces that is because Rick, who sticks his neck out for nobody, gets her out of the sticky situation and spoils Louis’ night.  But we know Louis will have countless other nights to barter letters of transit, people’s future for his own enjoyment.  Louis also switches allegiances – if he ever claims to have any – at the drop of a coin.  He’d sell out his own mother for the least of a night’s pleasure.  Among pickpockets, thieves and murderers, he reigns supreme – a low-life with power.  Yet he’s endearing, if I may use that word, probably due to the fact he is so honest about his dastardly ways.  He doesn’t pretend to be anything other than a louse.  And, as it turns out, I love him for it.

Well, that’s about all I have to say on this matter.  Love is all too often inexplicable so I shan’t (a Claude Rains word) continue to try to explain my love for Louis.  It just is, like so many of the most memorable and ever-lasting loves in the greatest of drama and literature.

[Rick and Renault discussing Victor Laszlo’s chances of escaping Casablanca]
Captain Renault: This is the end of the chase.
Rick: Twenty thousand francs says it isn’t.
Captain Renault: Is that a serious offer?
Rick: I just paid out twenty. I’d like to get it back.
Captain Renault: Make it ten. I’m only a poor corrupt official.

Claude Rains starred in so many of the films I love it is inevitable that I will post a ranting or two dedicated to one or the other at some point – Hitchcock’s Notorious, Whales’, The Invisible Man, Capra’s, Mr. Smith Goes to Washington, and Rapper’s, Now Voyager to name but a few.  None of those classics would be as highly regarded if not for the talent, class and style of this magnificent actor.

But there is something extra special about Louis.

If you’ve the time watch Turner Classic Movies all day today as it features Rains films for 24 hours, honoring this movie legend.  I will do the same while basking in memories of Louis’ shameless glory. 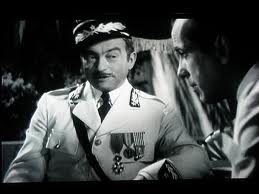 Rick: And remember, this gun is pointed right at your heart.
Captain Renault: That is my *least* vulnerable spot.

I submit this post today as my latest entry to the Summer Under the Stars blogathon hosted by Michael of Scribehard on Film and Jill of Sittin On a Backyard Fence.  This is a month-long marathon with countless superb entires on all things film by passionate cinephiles.  Go to either one of the host sites to read and enjoy.

I posted another blog entry on my experience of seeing Casablanca on the big screen for the first time, My Night in Casablanca.  If interested, you can access it here.